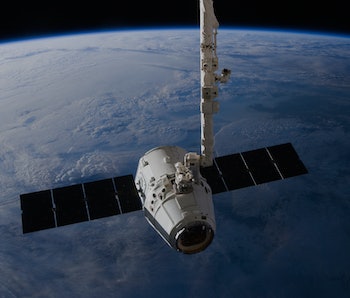 The space agency is being extremely mum on the details, but it’s pretty easy to guess what they’ll be discussing. Last month the world learned world learned NASA was expected to make a January announcement on which commercial spaceflight company would be awarded a massive $3.5 billion contract to be the exclusive manager of those resupply needs for the next seven years. And lo! Here we are, in January.

Orbital ATK and SpaceX have long been the two leading candidates for the contract. NASA has already outsourced ISS resupply missions to them under its Commercial Resupply Services contracts. Both have run into a stream of setbacks in the last couple of years — Orbital with its Antares explosion in late 2014, and SpaceX with its Falcon 9 rocket failure this past summer. And both companies used successful December launches to make closing arguments for why they should be the company to win the gargantuan contract.

The contract is part of a more aggressive U.S. effort to ween the country off relying on Russia for rocket launch needs and let the U.S. send its own people and resources into space independently once again. Thursday’s announcement is hot off the heels of the U.S. Air Force’s new $241 million investment towards developing new rocket propulsion systems to replace the Russian-made engines installed on the rockets primarily used to bring most of the U.S. military’s large satellites into orbit. Some of that money was, in fact, awarded to both Orbital and SpaceX to help them in their R&D efforts.

So who’s going to win the contract: Orbital ATK, or SpaceX? Given that both companies successfully completed their last missions of 2015, it’s hard to say. Both companies could, in fact, each win a share of the contract, as could dark horse candidate Sierra Nevada Corp. If I had to guess, I’d hedge my bets on SpaceX, simply because that company was able to fulfill more of its ISS resupply duties over the course of the last year than Orbital. We’ll find out if that prediction pans out later today.