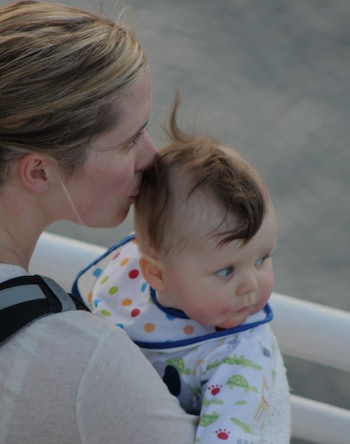 A person’s early 20s are usually marked by a series of milestones — moving away from home, landing their first big job; maybe having their first “grown up” romantic relationship. What the twenty-something years are increasingly not, at least for women, is a time to have their first baby. According to a Centers for Disease Control report released today, the average age of mothers in the United States at first birth rate is on the rise.

This is true across every race and in every state, particularly in (but not yet explained why) Oregon and the District of Columbia. Looking at data from 2000 to 2014, the CDC determined that the average age of first birth increased from 24.9 years in 2000 to 26.3 years in 2014.

“Over the past several decades, the United States continued to have a larger number of first births to older women along with fewer births to mothers under age 20,” reads the new report. “This trend and the more recent uptick in delayed initial childbearing can affect the number of children a typical woman will have in her lifetime, family size, and for the overall population change in the United States.”

This delay in motherhood is part of an going trend: A 2015 report by the Urban Institute found that between 2007 and 2012 the birth rates among women in their twenties fell by 15 percent.

Why the Age Keeps Going Up

While the CDC’s report is mum on the possible reason behind the decline, the Urban Institute proposes multiple causes: One of the most influential factors is the recession and its’ “painfully slow recovery, which was even slower for young adults.” If you’re a millennial, male or female, it’s probably not the wisest financial decision to have a kid right now. The Urban Institute points out that fertility rates declined in the early 1930s and 1970s as well, similar times of economic distress.

Another complexity could be the simultaneously roles women are expected to fill, both work-maven and mother. A recent poll found that for most highly educated women, motherhood doesn’t begin until their 30s. In a poll of the overall American population, 40 percent said that it’s better for a woman to hold off having children until she’s well established in her career, while 20 percent said career-minded women shouldn’t have children at all. Compound this pressure with what many say is maternity leave that’s too short, and you have women deciding to wait to have kids later and later.

The Good That Comes with Waiting

Waiting to have kids isn’t necessarily a bad thing — more and more women are having less children out of unmarried relationships; the choice to not have kids at all is a right that needs to be protected. But researchers at the Urban Institute say that if the trend of young mothers waiting to have kids isn’t counterbalanced by more older women becoming mothers, the United States could see the sort of generational imbalance that is seen in Japan.

Still, if you’re in your 20s, you just keep doing you and don’t worry about the numbers. Even the Urban Institute wraps up their report with, “It is too early, however, to predict or worry about that eventuality.”

It’s probably better now to worry about if you’ll ever get that weird Craigslist roommate out of your apartment rather than if you’re missing out on not having kids when you’re 24.