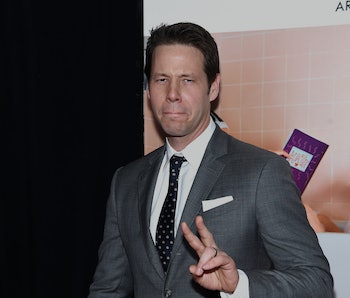 Suicide Squad, by and large, has played it safe with its casting. Will Smith is playing a cool guy who shoots guns; Jared Leto is playing someone twitchy and crazy-eyed; the Enchantress is being played by a model who we can count on to vamp. The one casting wildcard who could shake up the film? Ike Barinholtz. Because who saw that coming?

Barinholtz’s role is still a listed blank on the movie’s IMDB page. We do know him, at least, mostly for playing lovable weirdos in shows like The Mindy Project and movies like Neighbors.

He is a comedic actor who has pretty much been typecast as goofballs with dubious grasps of social cues. But it looks like he’ll be turning that formula on its head for his mysterious role in Suicide Squad. Barinholtz has said the following about his role in Suicide Squad, “I can tell you my character in that movie is someone you would not want at your house for dinner. He’s a very troubled human being.”

Taking the “dinner” comment literally, he could be referring to the cannibalistic Hannibal Bates, a villainous flesh-eating product of Lex Luthor’s Everyman project — which could help connect the film to Batman v Superman and the wider DC multiverse.

Of course, Barinholtz could be yanking everyone’s chains and randomly appear in the film as his usual doofy archetype. But for a comedian to play a cannibal who soaks up powers from people he takes bites of — now that’s the risky, wildcard kind of mentality that Suicide Squad needs.