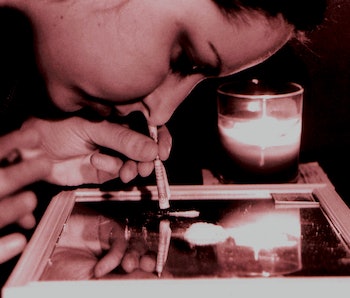 Once cocaine gets in the back door to your brain, you may not even realize how much you want it.

Scientists at Cambridge have uncovered a pathway in the brain that links its habit-forming region with the area most associated with positive responses to drugs, skipping the “reasoning” prefrontal cortex altogether.

They have also identified a treatment that has shown promise for those who are trying to quit.

The search for a way to break cocaine addiction started with surprising survey results from people who have relapsed: 60 percent of cocaine use relapses can be attributed to pronounced cravings, a physical compulsion outside the bounds of individual willpower.

Repeated use of drugs like cocaine overwhelms our brain’s command center in the prefrontal cortex with dopamine in such a way that the brain switches from viewing the drug as a fun way to get high to something more habitual and necessary.

But, this view implies that addiction works primarily through cravings and withdrawals responsive to the prefrontal cortex, yet the survey results show that a majority of addicts who relapse don’t experience cravings.

Researchers found the resolution in a less well-known area of the brain called the basolateral amygdala, which “is associated with the link between a stimulus and an emotion,” essentially storing positive memories about drug use. Normally, this information would be filtered through the prefrontal cortex, but the scientists are reporting having identified a direct link between the basolateral amygdala and the dorsolateral striatum, skipping the prefrontal cortex altogether.

“We’ve found a back door directly to habitual behavior.”

“We’ve always assumed that addiction occurs through a failure of our self-control, but now we know this is not necessarily the case,” explains Dr David Belin, a University of Cambridge Professor of Pharmacology. “We’ve found a back door directly to habitual behavior.”

This ‘back door’ can also help explain a classic paradox of addictive behavior: “A hallmark of addiction is that the user continues to take the drug even in the face of negative consequences such as on their health, their family and friends, their job, and so on,” Professor of Pharmacology Mickael Puaud said in an interview about the report.

So the researchers set out to find a drug that can directly target the new pathway and stumbled on the medication N-acetylcysteine, which has shown promise in the past at helping addicts quit, but is commonly administered to patients with cystic fibrosis or chronic obstructive pulmonary disease.

The first study conducted in rats indicated a great ability to eschew the drug among rats indicating a willingness to quit as well as an increase in brain plasticity possibly allowing for an easier time rewiring an addicted brain.

“Our study suggests that N-acetylcysteine, a drug that we know is well tolerated and safe, may help individuals who want to quit to do so,” Puaud said.