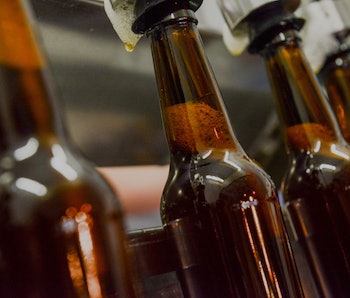 A bottle of brew older than airplanes, cars, and New Mexico’s statehood has been recovered from the bottom of the Atlantic, and while researchers say it’s quaffable, you’d have to be hitchhiking-the-Gobi thirsty to want a sip.

Brewed by Alexander Keith’s — a Canadian label still bottling ales in Halifax — the suds were found by a diver skimming the bottom of the Atlantic this November. It was likely brewed sometime between 1872 and 1890, which as the AFP notes is older than the birth of the Canadian Confederation.

Dalhousie University’s Andrew MacInstosh determined the bottle’s age and origin by the fairly obvious method of studying the label (breweries never stop fiddling with packaging), then tested the contents to determine that it wasn’t toxic, despite a lingering odor of sulfur.

“It’s not good,” he said, and we’ll leave it to you to imagine the look on his face as he presumably raced for the mouthwash. “Beers don’t age well, especially in the bottom of the ocean.”

He added: “On the palate, there is an odd minty flavor which I presume is from nitrogen, there is also some salt and a surprising amount of bitterness.”

Further analysis could give insight into the country’s historic taste for beers in the 1800s, as all these decades later Canada has yet to install a Minister of Getting Wasted.