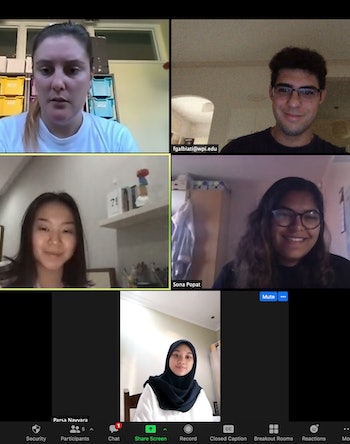 In 2018, Lucy Zuo published a scientific research paper on carbon nanotubes and the freshwater crisis. It was featured in an international peer-reviewed science journal by and for young people that she found online. She’s now a senior editor at the journal with a focus on chemistry and material science.

Zuo, a 19-year-old college undergrad studying biochemistry, has joined the ranks of about 200 other students ages 12 through 20 who write, edit, and produce scientific research for the Young Scientists Journal.

“It’s really cool that it's composed of all scientists from ages 12 through 20,” Zuo tells Inverse. “It encourages young people to really be interested in science and to experience things like getting your articles published and going through the review process.”

The journal’s head of production, Federico Galbiati, says the site gets about 1.5 million web hits a month and is currently the number one journal in their age range. The organization is divided into five departments, including production and editorial, and on top of its core operation — publishing scientific articles online — they also produce two print issues each year and host an annual conference. The journal’s eighth conference will be held digitally later this month.

“I think one of my favorite things about YSJ has been being able to work with young scientists from around the world,” Zuo says. “I have never personally met any of these people in person and I still feel so close to them.”

Galbiati is a 19-year-old computer science student at Worcester Polytechnic Institute, currently based in Milan, Italy. Zuo, originally from Kansas, is a 19-year-old biochem major at the University of Virginia. Sona Popat, YSJ’s head of editorial, is a 20-year-old biological natural sciences undergrad at the University of Cambridge. Shivanshi Tandon, the operations manager for the YSJ podcast and the project manager for its newsletter, is a 16-year-old high school junior based in Ohio.

Inverse spoke with Young Scientists Journal team members Galbiati, Zuo, Popat, and Tandon on working in their respective departments at YSJ and how the organization is providing young people interested in the sciences with a place to have their voices heard.

This interview has been lightly edited for length and clarity.

How did you assemble your Young Scientists Journal team?

Sona Popat: Students can enter the journal at any age within the age range and the head positions get passed on from student to student. The team has continued to grow since the journal was founded within that framework. The Young Scientists Journal as a whole, I would call it more a community than a team. Some people I work with daily and some people I’ve maybe talked to once or twice.

Federico Galbiati: I’m the head of production. We also have the artists team; they put together icons or banners or anything for the graphics. For example, they do the covers for our issues. We also have a Wordpress team that publishes all the articles every week to the website. We have a podcast team that just started. We also have the software engineering team that puts together our platforms. As a remote organization it's fundamental that we have a strong system for us to work with.

SP: I work and head the editorial team, which is made up of maybe 150 to 200 editors at any one time, and we are split into small subteams based on the subject the editors are interested in working on. I head a team of subject editors and they all have smaller teams between 10 to 12 editors, and so it's kind of a big hierarchy within editorial of teams that know each other really well but are part of a bigger group.

Shivanshi Tandon: I am relatively new to YSJ. I just joined this year, in April, and I had to lean a little bit on Federico to help me out with starting [the podcast] up. Other than that, everybody in YSJ is really supportive and helpful, and even though people have their own roles and responsibilities, they are really happy to lend a hand to the podcast, so it was really easy to get members on board.

Lucy Zuo: How I got involved was, I actually wrote an article for YSJ. I found them through search and submitted one of my articles and got published and said, cool I want to join the team now. And then I started as a junior editor and later became senior editor. Any editor with a focus or interest in chemistry or material science is in my group.

SP: In the sense of teams, it's flexible and dynamic. Someone can enter the journal in one position and see something really interesting happening somewhere else and think, I want to try that out. Someone can join as a social media creator or content creator, and go, I really like what the outreach team is doing; I want to get involved over there. It's really flexible in how we define teams.

How do you collaborate with other members within your team?

FG: We have our own management platform that we call the JMS, the journal management system, that's basically an online web system that our teams put together from scratch. It basically lets us see all the incoming articles from our submission portal with the status of each article divided by the category.

SP: At the moment most of the journal collaboration is done [in online chat], but we also have separate channels on Monday. We have different channels for different purposes and so people will frequently check in and ask their questions on a channel and everyone on that channel will see it and be able to answer it. As head of editorial, because I have a lot of people I’m managing, I frequently check in with them on a channel and ask how things are going.

“We are a community, we will be supportive, and you can get involved if you want to.”

ST: With the podcast, even though we have around 20 or less people working on it, I felt like it would be better to divide them into departments — with speakers and the people who write the script and the technical side. And I basically act as the bridge between all those departments.

What do you think the biggest advantage is when it comes to working as a team versus going it alone?

ST: The one great thing about YSJ is that there’s people from literally all around the world, and they all have their own expertises, their own input, their own contacts. With the podcast we need guest speakers, and I think that would be very difficult to trace by myself as I don't have as many connections as a collective group might have. Doing a whole podcast by yourself is going to be difficult, but everyone has their strengths and weaknesses, and as a team we can try to make the podcast as successful as possible with input from people all over the world.

FG: I personally prefer teamwork to working alone. It really opens your mind to work with a big team, with so many different countries and also doing meetings with other people from different countries. I’m from Italy and we don't really have too much of a young people STEM community over here.

SP: I would say there's every advantage of being in a team, especially in a field as broad as STEM or STEAM, where it's so collaborative and interdisciplinary. I can have an article I’m working on that can be linking cancer research and machine learning, and I can work on the cancer research side because that's where I have expertise, and I’ll work with another editor who knows a lot more about machine learning than I do. And that's definitely an advantage, having a broader range of expertise and support with people around you and doing the best job that we can.

FG: I wasn’t too exposed to international organizations initially and working with international people. I was more in the audience, and during the meetings that I did with other people, I learned so many different points of view. For example, during one meeting, a person from California suggested that instead of doing the brainstorming like we were doing it — putting down bullet points — he suggested that we make a flower. You throw a flower on a piece of paper and for each one of the petals of the flower, you put one idea on it. When you put ideas in a list, you're giving priority to what comes first and last most of the time. With this idea, you're putting things in a circle and we’re no longer influenced by what is a priority. It's just many experiences that, together, open your mind to different ways of thinking and working.

How is the Young Scientists Journal changing the field of STEM?

SP: A lot of the time when people talk about science communication or the science community, they think about a preconceived idea of a scientist, maybe an old man with crazy white hair or something like that, when actually a scientist can be anyone of any age with any background. The YSJ as a whole really encourages people and empowers them to get involved in an esteemed field if that's what they are interested in.

LZ: It’s really cool that it's composed of all scientists from ages 12 through 20, and it encourages young people to really be interested in science and to experience things like getting your articles published and going through the review process. I had this topic that I was really interested in, and just being able to write an article about it and actually see it published somewhere was really cool. And now I’m on the other side of things, editing, and I get to see the articles I’ve edited published as well.

ST: A lot of students, especially from the age that we’re targeting, want to get involved in science, but it's a little harder since you usually need really high credentials like graduate and undergraduate degrees. They want the chance to pursue and publish research, but that's hard with scientist journals, which is why a journal targeted specifically at a younger audience allows them a platform to share and engage with other people just like them.

SP: Before I got involved, when I thought of the idea of publishing science, it was someone at the peak of their career as an adult who has access to resources and a lab and funding to support them. But actually getting involved at the YSJ has taught me a lot on how people across the world are actually using what they have to get involved with science and make change in the world, and that is pretty incredible to me. And being able to spread that message and inspire people, that’s the most incredible thing to me.

ST: I’m interested in STEM, but I didn’t have the research experience, and I didn’t want to go straight into research when I didn't know much about it. I really wanted to see the behind the scenes of what goes into the journal.

SP: What I think the YSJ is doing that not many people are is making science communication accessible and empowering for every single person. We are a community, we will be supportive, and you can get involved if you want to.