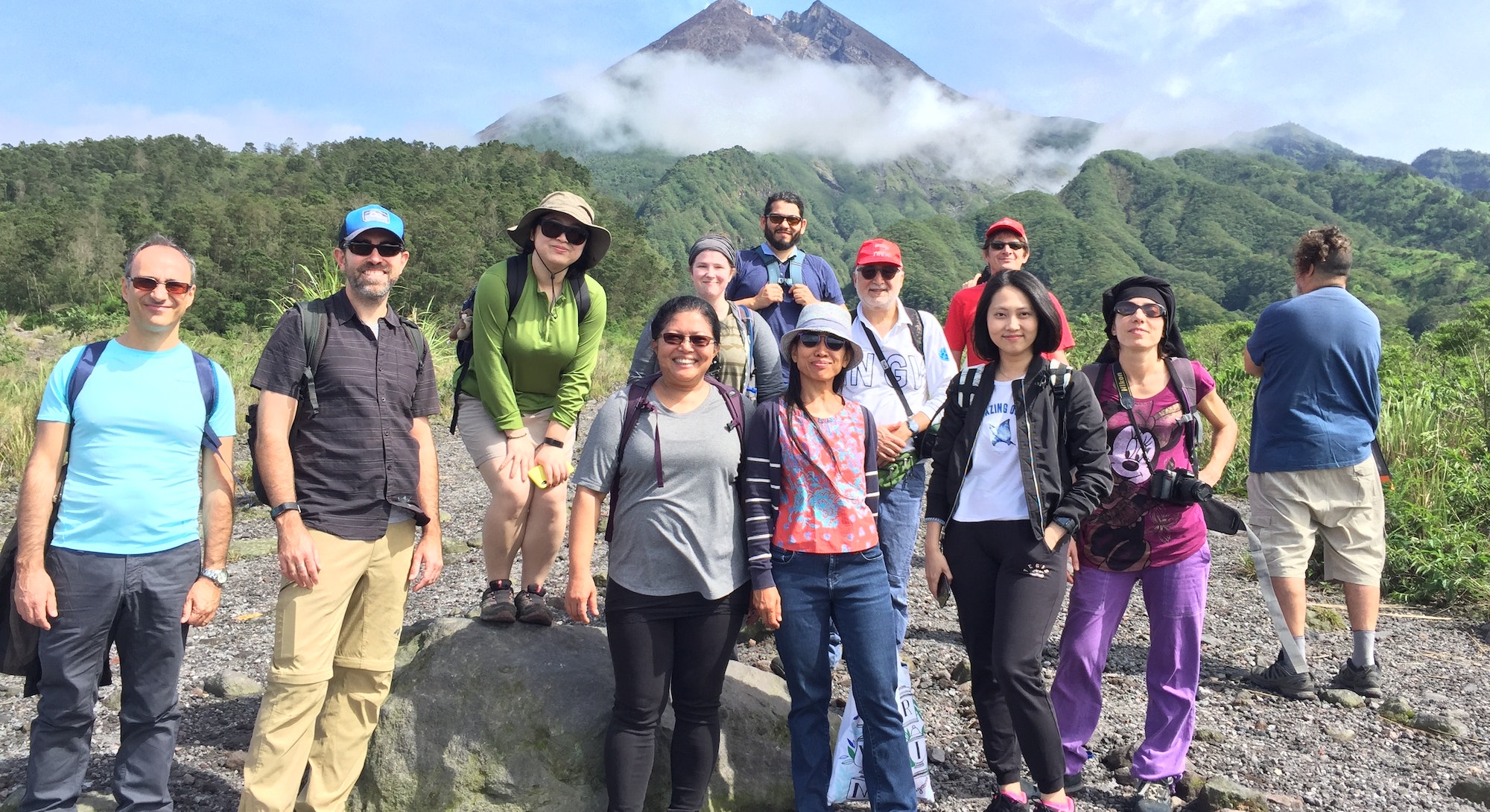 In the spring of 1980, scientists were getting nervous. Mount Saint Helens, an active volcano in Washington State, was rumbling.

Experts poured through decades of research on similar volcanoes in Russia and Japan, looking for ways to predict the damage an eruption might cause and mitigate future disaster. They combed through studies on earthquake patterns and gas chemistry buried in niche journals but found the data useless for comparison. It was tedious work, and conditions at the volcano continued to worsen.

The Mount Saint Helens eruption of 1980 was a disaster. The blast sent cascades of violent mudflows filled with debris (the USGS likens them to concrete rivers) down the volcano, destroying over 200 homes and 185 miles of road. Ash poured high into the sky for nine hours. Fifty-seven people died.

Today, the USGS calls the eruption at Mount Saint Helens an event that changed volcanology. The eruption jump-started interest in monitoring volcanoes more closely, forcing scientists from all disciplines to work together with the goal of being better prepared for the next eruption.

“In times of crisis, you want to have information like this at your fingertips.”

Volcanologist Chris Newhall was a graduate student at the time of the historic event. It inspired him to create the foundation for a more prepared future.

Today, Newhall is best known for co-creating WOVOdat, a free database of “volcanic unrest” across the world. (WOVO is short for the World Organization of Volcano Observatories.) The project has forged connections between scientists in some of the most volcanically active regions in the world.

WOVOdat reflects two essential principles, Newhall tells Inverse. Not only did scientists need to work together; they needed a tool to actually share information. The tool had to be simple, fast, and accessible enough to be useful during a crisis.

“Especially in times of crisis, you want to have information like this at your fingertips, not buried in dusty library stacks and in papers that might require translation or resizing of graphs to make episodes comparable,” Newhall says.

The dream — The idea of WOVOdat was forged during Mt Saint Helens eruption, but it was actualized after other volcanoes or calderas (large volcanic craters) started to rumble in the early '80s. In 1982, a caldera in California started showing suspicious activity, and Newhall, like the scientists before him, started searching for comparable cases.

Eventually he found them, but it took Newhall and a colleague five years to compile all the relevant information. The process, he reflects, would have been “hard to do in crisis mode.”

The laborious research was a reminder that WOVOdat, Newhall’s idea as a graduate student, was still a necessity. He took early, exploratory steps towards WOVODat by establishing ties with like-minded scientists. One expert, Steve McNutt, now at the University of South Florida, was even working on his own volcano database. Still, it was just a start and far from as comprehensive as Newhall envisioned. WOVOdat wouldn’t truly take off until 2009.

Today, WOVOdat is “a little bit like A.I. and doctors,” Fidel Costa, the current project leader for WOVOdat and a researcher at the Earth Observatory of Singapore, tells Inverse. Highly trained A.I. can look at a mammogram and, using a past library of similar scans, diagnose conditions like cancer in early stages — at times more accurately than a human.

With WOVODat, the volcano is the patient and the data is the scan. Scientists might be able to input the “symptoms” of a local volcano — the frequency of earthquakes around it or types of gas spewing from the top, for instance — and find similar patterns in other volcanoes around the world. Eventually, the scientists might use that data to make a diagnosis of how tumultuous an eruption might be based on similar cases.

The more data contained within WOVOdat, the better those predictions will be, which is why Costa and his team are working to forge deep connections with observatories around the world.

“That's why we need to increase the number of cases in the database. It has to be big to be able to do statistical analysis that's meaningful,” Costa says.

The team — When WOVOdat was created, communicating was a much bigger issue than it is today, Newhall says. “In the height of the Cold War, you couldn't just ring up your Russian colleague to ask about Bezymianny,” he says.

Still, Newhall managed to make some of WOVOdat’s first inroads between 1980 and 2000. He reached out to Dan Dzurisin, a USGS scientist he had collaborated with while researching caldera activity in the late '80s. The digital side of the equation was supplied by WOVOdat’s first international collaborator, Hiromu Okada, a scientist at Japan’s Usu Volcano Observatory.

Okada developed the first simple prototype of a database showcasing volcanic unrest throughout the world. But the project soon became sidetracked. Both Newhall and Okada had more pressing, funded work to do. (WOVODat was an unfunded passion project at the time.)

WOVOdat’s big break came in 2009, when the Earth Institute of Singapore, co-founded by Newhall, both funded and provided a full-time staff for WOVODat. By 2010, the site was live.

Now the project has a dedicated team, with Costa at the helm and an international steering committee of 15 scientists. By 2013, Newhall took a step back when his contract with the Earth Institute of Singapore ended but still considers himself a “godfather” to WOVODat.

How they stayed connected — The bulk of observatories regularly contributing to WOVOdat are based in Southeast Asia, specifically in Papua New Guinea, Indonesia, and the Philippines — though there is historical data from volcanoes all over the world. It’s a good place to start, Costa explains, as Indonesia is one of the most volcanically active countries in the world.

Costa has learned that WOVOdat’s success hinges on building relationships in person. WOVOdat’s team, based in Singapore, might go to a volcano observatory for a week and talk tactics. “We discuss, and we have coffee or tea,” Costa says. “People need to get relaxed with you.”

Meeting people in person, he says, can help break down barriers that stand in WOVOdat’s way. Sometimes, says Costa, teams may be reluctant to share data, especially with strangers. Not only are observatories busy and their data hard-won but the stakes are incredibly high. An overlooked detail or a missed eruption can cost people their lives.

Opening up data to multiple interpretations also raises the possibility that someone else might pinpoint an overlooked detail. “When there are sad stories, then there’s a lot of questioning. Did the people do the right job or did they miss something?” Costa says.

The hope is that collaboration would help assuage those fears and prevent further mistakes. But that requires developing trust between parties who may not see one another in person. WOVOdat can be the go-between.

Communication is key — WOVOdat is entrenched in the jargon of volcanologists. But they have had to learn to speak in a common language: data.

Data even gleaned from just one volcano can be messy because volcanoes themselves are chaotic environments. One eruption can destroy a critical instrument that measures activity. The replacement instrument may have new electronic settings or quirks. Individual observatories might also recalibrate instruments after a few years, which leads to slightly different measurements.

Constantly changing instruments and data collection styles make it hard to compare data across years for just one volcano (let alone volcanoes across the world). “What we have done is to have these data in a standardized format, and in a comparable format, because this is what you need,” Costa explains.

They’re refining the numerical language scientists use to describe volcanoes with the hope that wildly different observatories might be able to speak to one another.

Preventing catastrophe — Until every volcano observatory is contributing regularly, WOVOdat’s work won’t be done, but it’s making headway in a critical place. Mount Merapi, a volcano in Indonesia, has been in a “state of crisis” for two years, says Costa. It’s becoming a proving ground for WOVOdat.

It has already erupted once in 2021, creating a blast that could be heard as far as 18 miles away. In early January, about 500 people living near the volcano were evacuated.

Costa and the WOVOdat team have been working with the Merapi Observatory team for two years to clean and analyze 20 years of earthquake data. That data is good enough to help scientists estimate the probability that an eruption will happen if a certain amount of tremors are felt.

It’s still not clear how well their model works on upcoming eruptions, but it works well enough to predict past ones (a good sign that their analysis is accurate and could be used in the future), including a major eruption in 2018. “We actually were able to establish when the eruption would happen,” says Costa.

As WOVOdat continues to perfect its technology, it's never been more clear that they’re working against time. Newhall is the creator of the volcanic explosivity index: a rating of one to eight that describes the pure volume of material that comes out of a volcano. The Mount Saint Helens eruption that inspired its creation was a five on that scale — and an estimated 166 of these events have occurred in the last 10,000 years.

But Newhall has continuously warned that the world isn’t ready for a blast that’s a seven or eight on the scale. Earth hasn’t had to deal with the fallout of an explosion of that size for two centuries, and the last one was catastrophic. In 1815, Mount Tambora in Indonesia killed at least 10,000 people. All vegetation on the island was destroyed and the temperature in Europe dipped by almost a full degree due to the release of sulfur from the volcano.

“The next VEI-7 eruption could occur within our lifetimes, or it could be hundreds of years down the road,” Newhall told Nature in 2018. WOVOdat is just one way we might know when it’s coming — if they can get enough people to contribute.

What’s next – The future of WOVOdat hinges on a willingness to collaborate, and one major barrier to collaboration is time — particularly when observatories are operating in crisis mode. Lack of time, Newhall says, is the number one reason data doesn’t end up on WOVOdat. Costa agrees.

“[People running observatories] are putting out fires. And so when they put one fire out, there is another one coming, and they don't have time to really reflect upon how to do it better,” Costa says.

“There’s just not the bandwidth.”

WOVOdat is tasked with helping scientists around the world put out those fires with ease. Putting out small fires is no small goal because it leaves more time to get ready for the bigger ones.

If a massive eruption Newhall forewarned does happen within our lifetimes, we might actually see it coming.