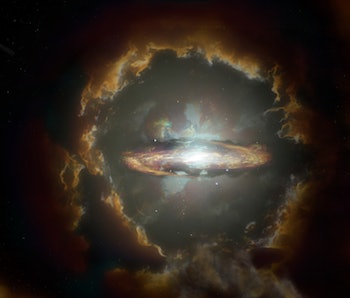 Shortly after the Big Bang, space was a hot mess of neutrons, electrons and protons. The early universe was defined by chaos , and astronomers believe that galaxies did not form till billions of years into cosmic existence.

However, a recent observation of a massive rotating disk galaxy that formed only 1.5 billion years after the Big Bang disputes the leading theory of how galaxies form, suggesting that some may take a lot less time to come into their final, massive form.

The discovery was made by the Atacama Large Millimeter/submillimeter Array (ALMA) observatory in Chile, and detailed in a study published Wednesday in the journal Nature.

The newly discovered galaxy was dubbed DLA0817g, and nicknamed "Wolfe Disk" after the late astronomer Arthur Wolfe, and is located about 12 billion lightyears away from Earth. The universe formed around 13.5 billion years ago, which makes the Wolfe Disk the most distant rotating disk galaxy every observed, formed in the early chaos of the universe.

"We were amazed that it showed characteristics of what we thought was rotation," Marcel Neeleman of the Max Planck Institute for Astronomy in Heidelberg, Germany, and lead author behind the new study, tells Inverse. "We were expecting more chaotic movement, stuff moving around in random motion."

The team of astronomers was targeting galaxies in the very distant universe when they stumbled upon Wolfe in what was initially a brief observation and saw hints of a rotating disk. Most spiral galaxies, like our own Milky Way, have a flat, rotating disk that contains stars, gas, and dust.

Through initial observations of the galaxy's disk, and the way it was rotating, the scientists could tell that the galaxy had already formed. And considering that the universe itself had only formed 1.5 billion years before this galaxy was observed, it did so in record timing.

"We always assumed that galaxies formed from a big ball of gas that would collapse, and while it collapses the gas gets heated up, then it would cool down and form stars," Neeleman says. "And that process takes a long time."

Most galaxy formation models have shown that it would take approximately 6 billion years after the Big Bang for a galaxy disk to form.

So how did the Wolfe Disk form? The Wolfe Disk must have formed a different way, collecting gas in another method without it being heated up.

The study suggests that the Wolfe Disk formed through the steady accretion of cold gas, whereby cold gas sneaks in and gets funneled into the center of the galaxy without heating up.

Therefore, although galaxies form continuously in the universe, there may be two methods whereby galaxies form, one taking billions of years longer than the other.

Observing galaxies in the early universe while they're still young helps astronomers form a better understanding of how these massive bodies that house millions of stars, and possible worlds orbiting those stars, form in the first place.

Even the origins of a galaxy like the Milky Way remains somewhat mysterious.

One thing that scientists do know about the Milky Way is that it is on a collision course with a neighboring galaxy, Andromeda, where the pair will eventually merge in about 4 billion years or so to form a larger galaxy.

More like this
Science
5.18.2022 7:00 PM
Look: ESA captures remarkable images of a “hedgehog” structure on the Sun
By Jennifer Walter
Science
5.13.2022 6:00 PM
Once a year, we get closer to NASA's Voyagers — here's why
By Elizabeth Howell
Science
5.20.2022 12:00 PM
The most controversial alien sci-fi movie on Amazon Prime explores a murky theory on the origin of life
By Tara Yarlagadda
Related Tags
Share: