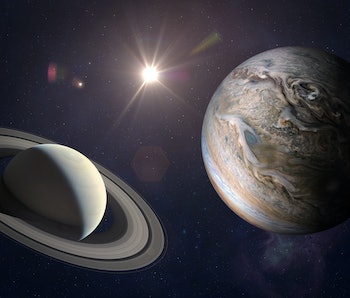 As they orbit around the Sun, planets often meet together in the night sky to create a spectacular visual effect.

On Monday, Jupiter and Saturn are scheduled for a rare rendezvous that hasn't taken place in nearly 400 years. The two will grace our night skies briefly after sunset, creating a memorable, and literally once-in-a-lifetime, view.

What is a planetary conjunction?

Monday's encounter is known as a planetary conjunction, which is when two planets' orbits align from our view here on Earth.

Jupiter is the fifth planet from the Sun, and is therefore closer to us while Saturn is slightly further away as the sixth planet. However, it takes Jupiter 12 years to complete a full orbit around the Sun, and Saturn takes a much longer 29 years.

However, every now and then, the two will line up perfectly in space, appearing as though they are right next to each other.

During their conjunction, Jupiter essentially laps Saturn, catching up with the gas giant in their respective trips around the Sun.

Jupiter and Saturn meet this way once every 20 years. But this year's rare alignment is the closest they will be since 1623.

And even then, the planet's alignment took place during the daylight and so it was hard to view in the sky. The last time Jupiter and Saturn met this close to one another during the nighttime was in the year 1226, meaning this rare sight was last seen by people nearly 800 years ago.

However, the physical distance between the two planets will not have changed. Instead, it's merely an optical effect.

The planets are not on a perfect orbital plane, and their respective orbits around the Sun are slightly inclined to one another. This year's planetary conjunction between Jupiter and Saturn is rare because the orbital planes of Earth, Jupiter and Saturn have all aligned to create this illusion from our view on Earth that Saturn and Jupiter are right next to each other.

Jupiter will appear as a bright star and be easily visible, while Saturn will be a little less bright, visible slightly above and to the left of Jupiter.

This rare alignment happens to take place on the night of winter solstice, the shortest day of the year that officially marks the beginning of winter season. This night makes for perfect viewing conditions as it is marked by shorter daylight, and so the two planets can be seen briefly after sunset.

How to see the Jupiter Saturn conjunction?

To view this spectacular display in the sky, look towards the southwest about an hour after sunset.

You must also have a clear view of the sky as the two planets are setting, so it is best to get as high up as you can and not have any tall tree tops around.

Jupiter and Saturn will be visible to the naked eye. However, a pair of binoculars or a small telescope will allow you to view these two gas giants in more detail, even getting a glimpse of Jupiter's larger moons as they orbit the planet.

The pair will appear as a double planet, separated by 1/5th the diameter of the full Moon.

The next time these two planets will appear this close in the night sky will be on March 15, 2080 so you don't want to miss this rare and exquisite display of these celestial beings tonight.

More like this
Science
Sep. 15, 2022
“Tantalizing” Mars rocks strengthen the idea the Red Planet once hosted life
By Doris Elín Urrutia
Science
23 hours ago
Mars’ ancient lakes could help discover life on the Red Planet
By Matt Williams and Universe Today
Science
19 hours ago
We’ve dumped over 15,000 pounds of trash on Mars
By Cagri Kilic and The Conversation
Related Tags
Share: