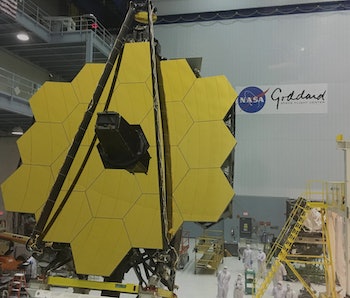 The multi-billion-dollar space telescope that has been more than 20 years in the making will be on its way to its perch 1 million miles away from Earth.

But the reality is, despite decades of work and billions of dollars, a successful launch — assuming it goes off as planned — is still just the beginning of the final stretch for the James Webb Space Telescope. It’s not headed for Earth orbit like the venerable Hubble Space Telescope, but will fly directly to Lagrangian point 2 (L2), a spot 1 million miles away where Earth and the Sun’s gravity cancel out, allowing the Webb to orbit the Sun with our planet permanently at its back.

Along the way, dozens of tiny things still have to go just right before NASA can officially begin science observations, and they all must take place far away from any human help in the cold dark recesses of deep space.

The first hours of Webb— So you’ve successfully launched your rocket and it didn’t blow up. Congratulations! It’s only additional perils from here on out, beginning with the rocket placing the Webb telescope into space, are:

The first week of Webb—

The second week of Webb—

But that’s not all she wrote — weeks of travel and calibration remain before the Webb can begin doing any science.

The third week of Webb—

The fourth week of Webb—

The next five months of Webb— Once Webb is safely in orbit at L2, all its components will have fully deployed, and its instruments are cold as hell. Can we do science yet?

Nope. The telescope’s mirror segments must be further aligned to ensure it can take sharp images by focusing on a distant star, which will take about two weeks.

Then the mirror segments must be further adjusted, this time taking into account each of the four scientific instruments on the telescope, another weeks’ worth of careful effort by operators on the ground.

Then, once the optics are finally aligned, months of instrument checks remain, ensuring that the instruments can receive and process the images focused by the mirrors.

It’s summer: Finally, we can science!— Finally! All has gone well, everything checks out, and a 20+ year journey is finally at its end: Scientists can start using their time on the Webb to image the faintest galaxies in the Universe, stare at exoplanets and even produce stunning images of planets in our Solar System.