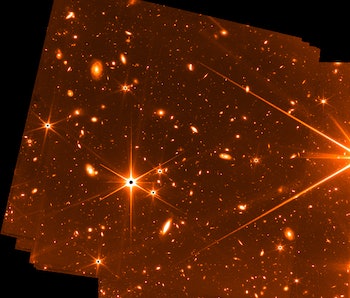 The Webb telescope’s engineering team wasn’t trying to break an astronomical record when it tested the telescope’s Fine Guidance Sensor in early May. But stuff happens.

In fact, the Fine Guidance Sensor isn’t even designed to look at faint objects in the distant reaches of the universe; it’s essentially Webb’s targeting camera. But during an 8-day test of the camera’s ability to stay locked onto a target while the telescope performed a barrel roll in space, the sensor stunned its operators with a record-setting view of the universe.

Nearly every object in this mosaic of overlapping images is a galaxy. The background is filled with thousands of them, and many are so distant and so old that the sensor’s operators didn’t expect it to be able to capture their extremely faint light. The bright objects with dark centers and six long, pointy spikes are stars in the Milky Way Galaxy (2MASS 16235798+2826079 is blazing at the right-hand edge of the image), but every other spot of light in the image is a galaxy. It is, according to the Canadian Space Agency in a recent statement, “for now, the deepest image of the infrared sky.”

NASA and ESA didn’t design Webb’s Fine Guidance Sensor for science. Unlike the telescope’s four science instruments, the targeting camera has no color filter, which means it can’t separate light into its individual wavelengths in a precise enough way for scientists to use the data. Webb doesn’t usually bother to send Fine Guidance Sensor images back to Earth. But this test image suggests that the Fine Guidance Sensor may have a scientific career ahead of it anyway.

“Given what we now know is possible with deep broad-band guider images, perhaps such images, taken in parallel with other observations where feasible, could prove scientifically useful in the future," said Neil Rowlands, program scientist for Webb's Fine Guidance Sensor, in a recent statement.

The image above results from 72 exposures taken over eight days in early May. If you look closely, you can see the overlapping edges of the frames where they’ve been pasted together into a single image. The stars get their six long spikes thanks to the way Webb’s six-sided mirror segments diffract their light, and their centers appear eerily dark because their brightness overwhelms the telescope’s detectors.

Usually, Webb would shift its aim to point at a few nearby spots around the star to get a full view, without the diffraction and the dark spots, but for the target image, that wasn’t considered necessary.