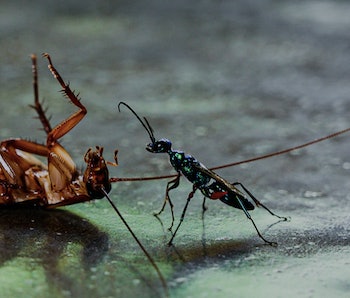 Most people recognize a wasp as those stripy insects that ruin our summer picnics. They live in huge societies, much the same as the honeybee. You might even have a nest in your loft or shed. But there’s a lot more to wasps than these socialites. In fact, the vast majority of wasp species (almost 99 percent) prefer to go it alone and don’t live in colonies.

These are solitary insects: the adults are assassins, and the young feast on the bodies of the living.

Sound gruesome? That’s because it is. Here are five of my favorite examples from the world of solitary wasps.

The infamous emerald jewel wasp turns its prey, the American cockroach, into a brainless zombie. The prey is several times larger than the wasp, so it cannot drag the victim to its nesting burrow. Two stings are all it needs: the first is a crude stab to the thorax, hitting the nerve cord and paralyzing the front legs. This makes it easier for the wasp to deliver the second, more precise sting into the brain to deliver a neurotoxin that blocks the receptors of the neurotransmitter involved in motor control, like walking.

The roach is transformed into a zombie slave that can still walk, fly, and run. Yet it cannot resist the commands of its assassin, who leads it by its antenna to its underground tomb. Here, the mother wasp deposits a single egg on the paralyzed roach and buries it alive. When the egg hatches, the wasp larva will consume its nursery mate, organ by organ.

Not all solitary wasps bother to transport their prey to a burrow. Some spider-hunting wasps hunt pregnant spiders and deposit an egg onto their abdomen. The spider recovers and goes about its business, oblivious to the wasp egg attached to its backside. When hatched, the wasp larva chomps its way through the spider’s behind, selecting the less essential parts first.

The mother wasp planned its baby’s first meal and positioned its egg to be in exactly the right place so the hatching baby could dive straight in and munch on the spider eggs. Only when the wasp larvae are ready to pupate does the spider keel over: all that remain are claws and mouthparts. Grim, yes. But this assassination is painless for the spider and all over in a few hours.

Unusually for solitary wasps, some species of sphecid (or thread-waisted wasp) lay several eggs in the same nest. All the eggs are laid on the first prey victim, such as a grasshopper. The nest is then packed with several more live but paralyzed grasshoppers before the mother plugs it shut with moss and abandons it forever. Life in a communal nursery is no fun, especially if you hatch later than your siblings. New research showed larger wasp larvae would snack on their siblings if their mother hadn’t provided enough food. Three-quarters of wasp larvae in nests end up as food for their siblings.

Sibling cannibalism is common in nature. Ladybirds happily cannibalize their smaller siblings. And when birds lay two eggs, the first hatchling will often consume the second. Social wasp workers also “recycle” excess brood by feeding them to larger siblings. In the case of these sphecids, the mother has made a cruel calculation. Laying eggs takes less energy than hunting prey.

Burying offspring with paralyzed prey poses serious hygiene challenges for solitary wasps: paralyzed prey are breeding grounds for bacteria and fungi lethal to baby wasps. The beewolf, which hunts honeybees, has a cunning solution. Before burying it, the beewolf embalms her prey by licking it all over to form a waterproof coat which minimizes fungal growth inside the cocoon. She then exudes bacteria from her antenna into the cocoon, lacing prey and brood with the antibiotic streptomycin (the second most medically useful antibiotic after penicillin). To top it off, the beewolf egg releases nitric oxide into the cocoon: the very same chemical we use to fumigate fungi that damage plants.

Wasp venom and other secretions are potential sources of antibiotics, fungicides, and perhaps even cancer treatment. My new book, Endless forms: The secret world of wasps, shows solitary wasps are medicine cabinets with untapped potential for medical science.

Not all solitary wasps have stings. Around 70,000 species have a long ovipositor instead — a tubular organ they use to deliver an egg to a host. Some of these wasps carry a symbiotic virus (both the virus and the wasp benefit from living together) which is injected into the host caterpillar with the egg and venom. The virus suppresses the caterpillar’s immune system, preventing it from attacking the wasp egg. It also alters the saliva of the caterpillar such that the immune systems of the plants they eat are suppressed, allowing the caterpillar to grow into a fatter, juicier meal for the wasp larva.

The wasp and virus integrate their genomes (DNA instructions within a cell), producing a new kind of virus. The grisly bit is that the changes in caterpillar saliva also induce the plant to send out chemical signals (pheromones) which attracts a second wasp species (a hyperparasitoid), which lays its eggs on the developing virus-vector wasp larva.

It is the very nature of their shocking life histories that makes solitary wasps so important. They play a crucial role in ecosystems, helping regulate populations of other insects and arthropods.

Non-stinging parasitoid wasps can be farmed on an industrial scale to defend crops against pests like the fall armyworm. And the hunting prowess of social wasps is yet to be harnessed for agriculture. They may well be unloved due to their stings, but if we can look beyond that, we may be able to appreciate the benefits they offer to the planet.

This article was originally published on The Conversation by Seirian Sumner at UCL. Read the original article here.

More like this
Science
6.27.2022 11:00 AM
Letting your cat go outside could spread “life-threatening” parasites — new research
By Amy Wilson, Scott Wilson and The Conversation
Science
6.16.2022 3:58 PM
8 rare species thought to be extinct that actually aren't
By Jennifer Walter
Science
8 hours ago
Heat dome: The United States is baking under this powerful weather phenomenon
By William Gallus and The Conversation
Related Tags
Share: