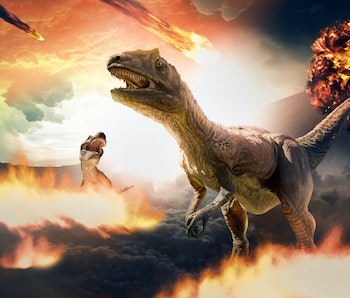 The story we’re told in school is that tens of millions of years ago, an asteroid hit the Earth and the dinosaurs went extinct. To our childish brains, it was as if someone had snapped their fingers, and *boom* — T.Rex and all his scaly (or feathered) friends were gone in a flash.

Thanks to the techniques of paleontology, we know that’s not really what happened — the mass dinosaur demolition was quick on the scale of cosmic time but slow on the scale of human lifetimes.

But something else we have known for a while now, too, is that this mass extinction was not caused by just one asteroid. Rather, they were made extinct through a cascade of disaster — not one, but multiple asteroids are in truth to blame for the obliteration of most of these monsters from the Earth.

What’s new — Now, a new discovery forces us to once again reframe the way we think about this time. A paper published Friday in the journal Science Advances reveals that the mass extinction of the dinosaurs didn’t happen the way we believed — specifically, it debunks the double impact hypothesis. This was a theory that two asteroids hit Earth one after the other, obliterating many of the dinosaurs and other life on Earth. The larger, more famous asteroid is known by the name of the impact crater, Chicxulub.

Turns out the pair of catastrophic space rocks may have had a very different combined effect on our planet.

“There was some work that suggested that Boltysh had actually happened before Chicxulub,” Annemarie Pickersgill, the paper’s lead author and a researcher at the University of Glasgow, tells Inverse.

Here’s the background — We hear you: Two asteroids, you say? OK. So first, we have the Chicxulub impact crater in Yucatan, Mexico. This infamous crater was carved out by an asteroid about 66 million years ago. The gouge measures 93 miles across and 12 miles deep and is now hidden underground — rock sediment tends to build up over millions of years, obscuring these scars on the Earth’s surface.

But scientists can drill down to find the rock layers dating to the time of Chicxulub’s formation, and they use methods like isotope dating to approximate the rock’s age.

Chicxulub is a result of the asteroid that’s generally been believed to have annihilated 75 percent of plant and animal life on Earth some 66 million years ago, including flightless dinosaurs.

In fact, the event was so defining in world history that the crater represents what’s known as the Cretaceous-Paleogene boundary, meaning that the event acts like a bookend on the Cretaceous period and the start of the subsequent Paleogene period.

And then in Ukraine, there’s the Boltysh impact crater. It’s only 15 miles wide and less than half a mile deep. Compared to Chicxulub, it’s a puddle. The two impacts occurred about 500,000 years apart, which on the planetary scale is not a very long time.

Why it matters — The fact that Pickersgill’s evidence shows that Boltysh came after Chicxulub supports the notion that the mass extinction was really the combined result of several different disasters, not just one. Initially, Pickersgill had been trying to home in on the precise period of time that Boltysh occurred using a dating method that involves tracing the decay of radioactive isotopes. Because the two impacts occurred so close together in time, it’s difficult to tell which came first — this paper puts the question to rest.

“What we are developing is this picture of Earth’s history around 66 million years ago,” Pickersgill says.

Even more interesting: the Boltysh impact coincided with a hyperthermal period, or a warming period, in Earth’s history. That included a lot of extreme volcanic activity in what is now India, in addition to the several asteroid impacts. It is possible the impacts may have fed or triggered the volcanic activity, Pickersgill speculates.

“A question we ask,” Pickersgill says, “is whether or not it was possible that a relatively small impact could have pushed it over the edge to cause this hyperthermal [period]?”

To be clear: this is a correlation. Pickersgill says there isn’t enough evidence to know whether there’s a causal relationship between the asteroid impacts and the volcanic activity.

Digging into the details — One of the most curious results from this study is embedded in the rock sediment of the impact crater itself.

Boltysh’s rock sediment tells an interesting story. Pickersgill’s co-author David Jolley analyzed the pollen record in the sediment layered right on top of the impact. Jolley is a professor of geology at the University of Aberdeen.

“Because when [the crater] formed, it would have locally wiped out all of the plants and everything,” she says.

So what we think of as the Great Extinction really may have been a series of smaller extinctions, with life struggling to find a way back after each one. According to Pickersgill, it takes between 2,000 and 5,000 years for life to start recovering on a sustainable scale.

What’s next — These findings hold water, according to Brian Huber, a research geologist at the Smithsonian National Museum of Natural History, who was not involved in the study. A good next step would be to model it and test the assumptions in order to get a clearer picture of this catastrophic period of Earth’s history.

“It’d be great if somebody modeled this so that you have to make all these assumptions that go into the model. And then vary those assumptions just to sort of a range of predictions, and see what the outcome is.”

The next step, Pickersgill says, is just that: To take this real-world data to researchers to build numerical simulations so they can model the climate at the time.

As easy as it is to believe that this is all ancient history and that humans are the superior life forms and the planet is ours for the taking and we are invincible, that just isn’t true. We stand to learn some critical lessons for survival by understanding how life persisted in the past.

“The Yellowstone volcano is gonna erupt, that’s gonna have a heck of an effect on an economy,” Huber warns. “So people go about their lives.”

“I think, ‘Well, I want to live my life to the fullest.’ Because you never know when the next impact’s around the corner,” he says.

Abstract: Both the Chicxulub and Boltysh impact events are associated with the K-Pg boundary. While Chicxulub is firmly linked to the end-Cretaceous mass extinction, the temporal relationship of the ~24-km-diameter Boltysh impact to these events is uncertain, although it is thought to have occurred 2 to 5 ka before the mass extinction. Here, we conduct the first direct geochronological comparison of Boltysh to the K-Pg boundary. Our 40Ar/39Ar age of 65.39 ± 0.14/0.16 Ma shows that the impact occurred ~0.65 Ma after the mass extinction. At that time, the climate was recovering from the effects of the Chicxulub impact and Deccan trap flood volcanism. This age shows that Boltysh has a close temporal association with the Lower C29n hyperthermal recorded by global sediment archives and in the Boltysh crater lake sediments. The temporal coincidence raises the possibility that even a small impact event could disrupt recovery of the Earth system from catastrophic events.