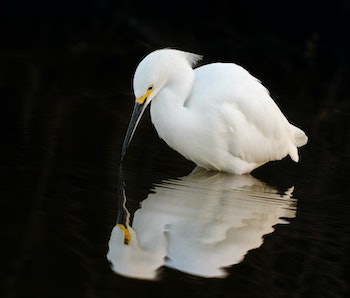 The climate crisis is taking an enormous toll not only on our species but also on our animal friends.

Scientific evidence shows animals have adapted to the stressors of the climate crisis in various ways, such as birds laying eggs earlier in the spring. Researchers even think some of these animal adaptations could help us save life on planet Earth.

But one recent study demonstrates how animals are taking takes this adaption to new extremes, changing their very bodies to survive climate change.

A study published this September in the journal Trends in Ecology & Evolution found certain animal body parts are “shapeshifting” — they are growing larger in response to a warming planet.

“Animals can use their appendages to regulate their body temperature, by letting go of excess body heat,” lead author Sara Ryding, a researcher at Deakin University’s Center for Integrative Ecology, tells Inverse.

As a result, animals from Australia to the Arctic are evolving “proportionately larger appendages in response to climate change and its associated temperature increases,” the study team writes.

Larger appendages can help animals better regulate their body’s temperature — an advantage in a warming world.

Ryding’s team honed in on four animal appendages that have adapted remarkably well to our rapidly changing world.

The researchers write: “In some animals, such as rabbits and mice, ears and tails, respectively, are linked to heat exchange.”

“We have also seen evidence of tails getting longer, in shrews,” Ryding says.

According to the study, “unfeathered or unfurred legs in birds and mammals are linked to thermoregulation.”

The researchers wanted to know whether leg size would be affected by climate change. In turn, they discovered that some shrews have evolved to have larger leg sizes. This helped with an adaption to warmer temperatures.

However, this adaption was less common compared to changes seen in beak and ear sizes.

This study suggests animal appendages are more likely to increase in size if they use them for heat regulation.

The researchers found that the following animals increase ear size in response to warmer temperatures:

Bird bills adapt to seed sizes — but now researchers know they are adapting to temperature, too.

“So, for example, when a bird gets warm, it can let go of this extra body heat through its beak,” Ryding says.

The researchers analyzed how finches with different beak sizes are surviving in the changing temperatures of the Galapagos islands.

Not surprisingly, the scientists found that birds with smaller beak sizes weren’t able to regulate their body temperatures as well in warm years, impacting their survival and increasing the likelihood that birds with larger beaks would go on to reproduce. That’s evolution in action.

The beaks of other birds, such as house sparrows and certain kinds of parrots, also became larger as the avians adapted to rising temperatures.

“Larger beaks means that there is more surface area for them to let go of body temperature from,” Ryding concludes.

This study shows how animals can shapeshift in response to climate change, but we’re still figuring out the mechanisms behind this shapeshifting behavior.