Astrophysicists may be on the brink of a massive alien breakthrough 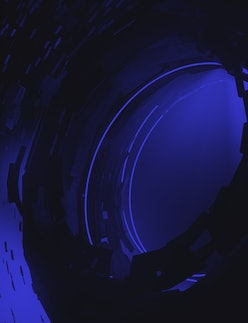 Signs of advanced extraterrestrial civilizations may be all around — if only we looked for them.

That’s the conclusion of a new paper penned by a team of researchers at the Search for Extraterrestrial Intelligence Institute. Pennsylvania State University astronomer Jason Wright and his colleagues argue that technological clues could be both common and easier to detect in space than biological signatures.

Technosignatures include radio signals, spacecraft activity, reflected light from construction, and pollution in the atmosphere of an exoplanet. All of these could tip off scientists on Earth to a far-away alien civilization, scientists not involved in the paper tell Inverse.

What's New — Wright and his colleagues argue that the raw mathematics of the search for intelligent life on other worlds might be less daunting than we’ve long assumed. If he and his colleagues are correct, the number of planets — or even star systems — where astronomers might find technosignatures could actually be larger than the number of planets where they might find signs of biological life.

The paper lays out a hypothesis that tech-savvy extraterrestrials may be easier to spot from Earth than myriad other inhabited worlds, even if they are teeming with life. An intelligent lifeform, the theory goes, could feasibly build radios, lasers, and spacecraft (not to mention things like theoretical mega-structures like Dyson spheres). If they can do these things, then it follows that they might also spread their technology across several planets, perhaps even star systems.

Like artificial products here on Earth, this technology could hang around longer than the civilization that built it, radiating technosignatures out into space or leaving unmistakable traces of life on exoplanets (like trash on Earth).

“We aren’t that far from being able to outline how machines might self-repair and even reproduce without any human input, so it’s also easy to imagine that technology might become self-sufficient and outlive its creators that way,” Wright tells Inverse.

This is a two-way street: Our own machines spread throughout our Solar System and beyond could give away our position in the cosmos to an intelligent alien lifeform, too.

Why it matters — Life can drastically change the chemical makeup of a planet’s atmosphere — but only on the world or worlds where it lives.

Wright and his colleagues point to our own Solar System. Only one planet (that we know of) hosts life. We can use what we know to infer signs of biology on other planets — the presence of water, for example. But it is hard to know how — if ever — we will be able to use these signals to definitively conclude there is life on another world without going there ourselves.

Conversely, our species has managed to spread its technology to Venus, Mars, and Jupiter, not to mention the Voyager crafts hurtling in interstellar space.

In theory, our orbiters and rovers have already been noticed by an alien listener on the right frequency and a sensitive enough receiver pointed in the right direction.

In turn, imagine our future: An extraterrestrial astronomer looking at our Solar System 200 years from now might notice traces of our technology on several worlds long before you noticed the chemical fingerprints of life in our single planet’s atmosphere.

Technology can also outlive its creators. SETI Institute astronomer Jill Tarter, who was not involved in the study, tells Inverse the Lageos satellites, a pair of laser reflectors in very stable orbits 5,900 kilometers above Earth, are a case in point.

“The Lageos satellites will probably continue to orbit the Earth long after the planet becomes uninhabitable,” she says.

Digging into the details — Wright and his colleagues put the problem of finding aliens in mathematical terms — and this isn’t a new idea. In 1961, astronomer Frank Drake proposed an equation to estimate how many alien civilizations might have a chance of communicating with us (on purpose or not) across the vastness of space.

According to the Drake Equation, if we know how many habitable planets there are, how often life arises when given the chance, and how often life evolves into a species that can build advanced technology, we can estimate the number of “communicating” alien civilizations in our galaxy. And if we know how long such high-tech cultures survive, we can estimate how many of them might be around at the right time to notice (or be noticed by) us.

Intuitively, you might expect each term of the equation to be smaller than the last: Life won’t always lead to a tool-using species. Not every advanced species will invent lasers or telescopes.

On Earth, ancient humans like Neanderthals and Denisovans didn’t make it that far. Rather, the Drake Equation suggests we’ll find signs of life, like oxygen and methane in a planet’s atmosphere, much more often than radio signals or Dyson spheres.

Not necessarily so, Wright says. Part of the reason why — Tarter points out — is that technology can last and keep pinging signals out into the cosmos long after the life that built it has moved on or died out.

“Often people believe that Lt [the term that represents how long a technologically-inclined species is “online” and able to communicate] is the age of the technologists, not the length of time the technology continues to operate, which might be much longer,” Tarter says.

That means we should take the search for technosignatures seriously, but it doesn’t mean we should give up on biosignatures — or throw out the Drake Equation.

“Wright's team is not arguing that we should throw out the Drake Equation,” Breakthrough Listen project scientist Steve Croft, who was not involved with the study, tells Inverse.

What’s next — Ultimately, Wright’s work might help bridge the rift between astrobiologists and SETI researchers.

“SETI has until recently been a very small field, and many of its practitioners have come from outside of astrobiology in fields like electrical engineering and radio astronomy,” Wright says.

As a result, researchers in the two fields tend to use different jargon and publish in — and often read — different journals.

If more astrobiologists considered technosignatures a viable way to find extraterrestrial life, Wright and his colleagues argue, then scientists from both fields could work together to plan sky surveys to up the odds that someone involved will spot something — whether it’s an atmosphere full of methane and oxygen or a radio signal leaked from an alien news broadcast.

“I don’t show up to work expecting that today will be the day I’ll find aliens.”

Collaboration could also help both scientific communities prepare to handle a potential breakthrough — or a big disappointment.

“From claims of phosphene on Venus to the [Breakthrough Listen Candidate 1] detection of a signal while a telescope was pointed at Proxima [Centauri], both communities are wrestling with standards of evidence and how to communicate ambiguity and uncertainty to their peers and the press,” Wright says.

Things are starting to change; the SETI Institute itself is now home to several astrobiologists, and recent Astrobiology Science Conferences have included sessions on both biosignatures and technosignatures. Alongside privately-funded projects like Breakthrough Listen, NASA is also starting to show more interest in investing in the search for technosignatures.

By 2026, the Breakthrough Listen project will have searched 1 million stars and the bright centers of 100 nearby (in cosmic terms) galaxies.

Earlier in April 2022, crews at the National Science Foundation’s Very Large Array (VLA) radio telescope in California set up a system to send the telescope’s data to the SETI Institute to look for technosignatures while the VLA scientists concentrate on other astronomical research. The project, dubbed COSMIC, goes online in 2023.

Further in the future, in 2027, the Square Kilometer Array (a network of radio telescopes in Australia and South Africa starts listening to the sky, too. It will search for the earliest building blocks of life in the regions around newborn stars. It will be powerful enough to pick up unintentional radio “leaks” from alien civilizations — hopefully.

“I don’t show up to work expecting that today will be the day I’ll find aliens,” Croft says. “But I do show up to work, so I guess I’m cautiously optimistic about our chances of success.”