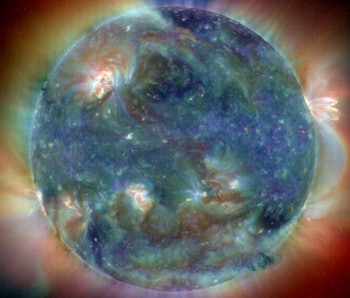 This weekend, summer shall officially commence with the celestial event known as the summer solstice.

Saturday, June 20, will mark the longest day of the year as the Earth arrives at a point in its orbit where the North pole is at its maximum tilt towards the Sun, and a day that is used to kick off the summer season. The season will be marked with long days, more sunlight, and shorter nights.

To understand how we arrive at a point where the Sun is seen at its height every day in the Northern Hemisphere, we must first backtrack in order to understand what controls the seasons on Earth.

Understanding the seasons means understanding the Earth's tilted axis. The Earth's axis is an imaginary line that runs through the center of the planet from the top to the bottom and is always tilted 23.5˚ with respect to the Sun. The Northern and Southern Hemispheres trade places every six months: one side receives more direct sunlight and warmth, with either side being a little bit more tilted towards the Sun during those six months.

The word solstice is Latin for 'Sun stands still,' as the Sun appears to stop moving once it reaches its position in the southern or northernmost part from the equator, and the angle between the Sun's rays and Earth's plane appears to stand still.

The summer solstice typically occurs between June 20 and June 22 when the Sun reaches the northernmost point from the equator.

In Ancient Egypt, the summer solstice also marked the beginning of the new year as it took place at the same time as the rise of the water levels of the Nile River.

The opposite takes place during the December solstice, marking the beginning of the winter season in the Northern Hemisphere.

The solstice takes place at the same time for everyone on Earth, kicking off at 9:44 p.m. Universal Time Coordinated or 5:44 p.m. Eastern Time in North America.

Afterward, the Sun appears to reverse its course and slowly head back in the opposite direction until the next solstice in December, when the Northern Hemisphere will once again be tipped furthest away from the Sun.

More like this
Science
Feb. 4, 2023
The Milky Way Galaxy May Be a Unique Heavyweight in One Weird Way
By Evan Gough and Universe Today
Science
14 hours ago
What Mysteries is the Universe Hiding from Us? A Cosmologist Weighs In
By M. Mitchell Waldrop and Knowable Magazine
Science
Feb. 4, 2023
Astronomers May Be on the Cusp of a “Potentially Revolutionary” Cosmological Breakthrough
By Universe Today and Matt Williams
LEARN SOMETHING NEW EVERY DAY.
Related Tags
Share: