Every day could be the day we hit it big. Real big. 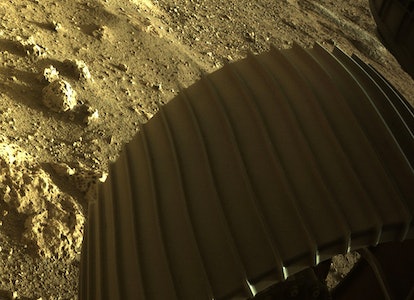 The speedy, drill-equipped Perseverance Rover has been peering into the Martian landscape over the last year as NASA scientists plan their continued exploration of the planet’s geological treasure trove.

Its six wheels recently broke a Martian land speed record, carrying Perseverance across the bed of a crater at a speed of a tenth of a mile per hour. This is faster than any of its rover brethren before, speeding toward its new home at Three Forks, where it arrived last Wednesday. Three Forks is the ancient meeting place of a long-dried river and a lake, and the start of Perseverance’s second science chapter which JPL personal are calling the Delta Front Campaign.

The official second campaign kicked off Monday. This week, the rover is in scouting mode, driving to the southwest and then west, getting progressively farther away from its landing site to find the staging area for its new assignment.

According to a Tuesday announcement about the new campaign, this precursor trip will help NASA scientists select the best route to ascend the delta, which rises above the crater floor by about 130 feet (40 meters).

Perseverance is looking for rocks with signatures of ancient Martian organisms, using onboard instruments for on-site measurements while also storing interesting samples for later retrieval and return to Earth.

The 3.9 billion-year-old Jezero Crater has been home for Perseverance since the mission’s epic landing on February 18, 2021. The region was likely home to ancient bodies of water, the key ingredient to life as we know it. If there were microbial life flourishing on Mars in the distant past, the dynamic aquatic environment of the region would have transported rocks and dropped them here, providing an excellent spot for scientists to investigate the history of several nearby corners of the planet at once.

“So these interesting rocks will arrive somewhat randomly to us as we explore the delta … every day of the year-long ‘Delta campaign’ will be exciting for every scientist on the team, because every day could be the day we hit it big. Real big,” Adrian Brown, deputy program scientist for Perseverance at NASA Headquarters, wrote in an April 15 mission blog post.

The science team needs to ascend the delta to reach an ideal excavation spot and is deciding between two routes. Whichever way they pick to ascend the delta — currently a toss-up between Cape Nukshak and Hawksbill Gap — once Perseverance is there, it can look at sediments that came from upstream. This site allows NASA scientists to see rocks from places the rover itself won’t physically reach.

As the river in Three Forks ran its course, it picked up bits of rocks and sand here and there and carried them along its route, much as rivers transport sediments on Earth. When a river meets a standing body of water, like a lake, the water slows down and drops its rocky parcels. These deposits formed a delta, which billions of years later can be explored with robotic ingenuity to pick apart and sift for pieces that came from miles away long ago.

The delta is “like a book with pages, which one can turn over each day to learn more about the history of Mars,” Brown wrote.

Some of these rocks might contain evidence of ancient life on the Red Planet and be a “veritable geologic feast,” Thomas Zurbuchen, the associate administrator of NASA’s Science Mission Directorate in Washington, commented in the Delta Front Campaign announcement.

NASA expects the rover to take about eight samples during the Delta Front Campaign for future retrieval. The campaign will last about half an Earth year.