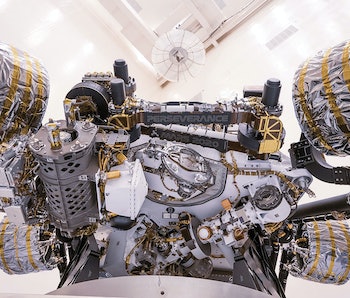 As NASA's Perseverance rover counts down the weeks until its trip to Mars this summer, the space agency is putting it to the test, to make sure it can have a safe landing on the Red Planet.

NASA released a video this week that shows the team of engineers at the Kennedy Space Center in Florida conducting a series of crucial tests on the rover to ensure that its center of gravity and balance are on point.

The testing process began on April 6, and lasted for three days.

In the video (see above), the rover is lifted onto a special test fixture, and slowly rotated around its x-axis, or the imaginary line that runs from its tail to its front, sort of like roasting a giant, robot pig.

This test helps determine Perseverance's center of gravity relative to its axis.

The likely dizzy robot was then moved onto a spin table, where it busted out some breakdancing moves: This part of the test was to determine the rover's center of gravity in relation to its z-axis, which extends from the robot's bottom to the top, and y-axis, which extends from its left side to its right. The team of engineers rotated Perseverance back and forth in order to calculate any imbalance in the distribution of its mass.

In order to minimize the margin of error that could result from friction, the tabletop is actually placed on a spherical air bearing that essentially levitates on a thin layer of nitrogen gas. Sort of like air hockey, but far more sophisticated.

The team of researchers then placed a weight on the rover's chassis, adding 13.8 pounds to Perseverance (which weighs 2,260 pounds), in order to bring it into balance.

Prepare for landing — This series of testing is important for one crucial element of the rover's trip to Mars, its landing. By accurately measuring Perseverance's mass properties and center of gravity, the team behind the rover's mission will ensure that the car-sized robot travels accurately during its trip to Mars, from its launch and all the way to its descent, according to NASA.

Once it lands on Mars, Perseverance will look for signs of habitability on the Martian surface and past microbial life, collecting samples of rocks and soil and setting them aside for a future mission to return them back to Earth.

The mission will also test out conditions for possible human exploration of Mars by trialing a method of producing oxygen from the Martian atmosphere, characterizing environmental conditions such as water and dust on Mars, and looking for resources.

Perseverance rover is set to spend at least one Martian year on the planet — the equivalent of 687 days on Earth.

Despite ongoing concerns regarding the spread of the novel coronavirus, and how it may affect upcoming missions to space, NASA is set to launch the Perseverance rover during its designated July-August, 2020 launch window. If it misses the window this summer, it won't be able to launch until September 2022, which is the next time Earth and Mars are aligned for an optimal journey.

Perseverance is expected to land on Mars' Jezero Crater on February 18, 2021.