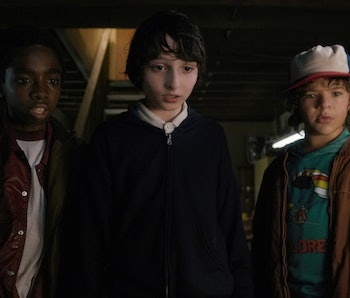 Scientists generally assert that it’s not a great idea for older people to have kids. In addition to the added stress that a new child could add to an already-exhausted person’s life, there’s also the concern of genetic mutations building up over time, increasing the risk of disease in offspring.

But King’s College London researchers recently questioned that common belief by arguing that older dads have one important advantage.

In an article published in the journal Translational Psychiatry, they reported that older fathers were more likely to have “geeky” sons. These kids, as defined by the researchers’ “geek index,” tend to have higher IQs, are more focused in school, and are less concerned with “fitting in” than their peers. The researchers go on to say that those geeky kids are more likely to be successful in life, so, therefore, dads who can father children later in life might have an evolutionary advantage.

But that research — a hit with self-proclaimed geeks wondering about their inheritance — was fraught with holes and logical gymnastics. Here are two points that should give wondering readers some pause.

There’s Probably Not a “Geekiness Gene”

In the paper, the researchers claim that geekiness was “57 percent heritable” and that this provides insight into the molecular and genetic effects of an older father having children.

Their argument relies on the children’s “geek index” score, which was calculated on the basis of the personalities of the kids they studied. These measurements were based on the Twin Early Development Study (TEDS), a survey of 7,781 British twins in which parents assessed the characteristics of their 12-year-old children via questionnaire. Geeks, according to the index, had a high IQ, were socially aloof, and focused on things intensely. The index also emphasized geeks’ engagement in repetitive behaviors, a hallmark sign of autism spectrum disorders. (Interestingly, the researchers excluded people with ASD from their study.) When these characteristics in kids were assessed against parental age, there was a correlation between old dads and geekier kids. While that obviously suggests that inherited genes play a role, the extent of its importance is vague at best.

Many aspects of personality can be influenced by genetics, but this paper doesn’t mention which genes or which personalities. In fact, there’s no mention of genetic research or microbiology anywhere in the paper.

The researchers sum up their explanation as such: “Both familial, additive genetic effects and de novo mutations — including those accumulating in paternal sperm with age — likely contributed to this measure of heritability.” In other words, those genes might have been passed on through the generations (suggesting that geekiness runs in a family) or might just be mutations resulting from old age.

More important to consider is that the older parents of the geeky kids just happened to raise them a certain way. It’s possible it had nothing to do with the parents at all.

In an interview with The Guardian, the study’s lead author Magdalena Janecka, Ph.D., said: “If you look at who does well in life right now, it’s geeks.” In the paper, the researchers argue this point by comparing geeky kids with another data set comprising the kids’ standardized test scores, and the number of technical subject tests in STEM, and art subjects they took when they were 16.

The paper extrapolates that. Because STEM fields tend to pay better than others, high schoolers who do better in these fields will then go on to find success as engineers or in other professions. However, in the data, there’s hardly a difference between some of the different groups for whom they measured geekiness indexes. The graph below, for example, shows that students with high IQs took the same amount of STEM and art subject tests as the geeks, regardless of social aloofness and repetitive behaviors.

The paper authors admit that this indirect correlation is a particular weakness in their research: “Although we could show that GI was strongly associated with measures of educational attainment in STEM subjects, which has been previously shown to strongly predict future income, we could not test these effects directly because cohort members are young.”

The researchers made some questionable choices on inclusion.

The researchers fully conceded in their paper that they weren’t sure why they didn’t see an impact in the father’s age on daughters – according to their genetics logic that could mean that there’s a biological difference in how having and older dad affects genders differently. They also mention that it could just be that people don’t know how geekiness manifests in women. But that sounds like the sort of logic you would hear from those guys who refuse to believe that women play video games and read comics.

However, it is true that scientists know very little about how autism spectrum disorders affect girls and women. An upsettingly-small amount of science has been done on gender differences in that regard, and it’s possible that the lack of results on women found in this paper is a result of that disparity.