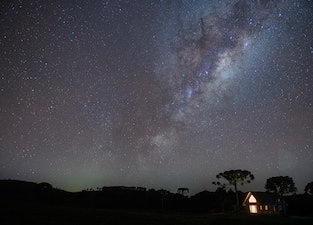 New telescopes could be built in North America

The iconic Very Large Array telescope in New Mexico has been at the forefront of astrophysical research since its dedication in 1980. The Y-shaped configuration of 27 radio astronomy dishes has made critical discoveries about the cosmos while becoming a part of pop culture in several high-profile movies.

But the aging array is due for an upgrade, one that would take advantage of advanced technology. So says the latest Decadal Survey, published by the U.S. National Academy of Sciences, which presents a consensus among researchers on the most important scientific goals and missions for the upcoming decade. (The survey and its results are colloquially known as “Astro 2020.”)

Researchers are proposing the Next Generation Very Large Array (ngVLA). As envisioned, it would be a system of 263 dish antennas spread across North America but concentrated in the U.S. Southwest. Scientists say the new array would provide dramatic new scientific capabilities to the world’s astronomers. The concept was listed as the second most crucial ground-based project, with the U.S. Extremely Large Telescope ranking first.

Tony Beasley, director at the Radio Astronomy Observatory (NRAO), says the endorsement shows that others in the astronomy and astrophysics community recognize the need, too. You might even call the reason, or need, wondrous:

“They need the ngVLA to meet the leading research challenges of the coming decades,” Beasley says. “We designed the ngVLA based on extensive advice from the research community and know it will be in high demand by scientists from around the world.

“It will be in high demand by scientists from around the world.”

“This Astro2020 outcome is a direct result of the close collaboration between NRAO and the greater astronomical community in developing both the broad, transformative science case and technical design of the ngVLA over the last five-plus years,” said Eric Murphy, NRAO’s Project Scientist for ngVLA. “All of the community’s hard work has clearly paid off, and we now look forward to continuing this collaboration as we finalize the design and move toward achieving first light with the ngVLA,” Murphy added.

The idea for the ngVLA has been in the works since 2015. The NRAO worked with numerous scientists and engineers to develop a design to support a wide area of scientific investigations over the facility's lifetime. Participants from around the world contributed suggestions and expertise regarding the design.

The heart of the new ngVLA is expected to remain at the current site of the VLA on the Plains of San Agustin in New Mexico, with several radio antennas and a signal processing center. Other antennas would be located throughout New Mexico, west Texas, eastern Arizona, and northern Mexico. More antennas will be located in clusters in Hawaii, Washington, California, Iowa, West Virginia, New Hampshire, Puerto Rico (at the site of the Arecibo Observatory), the U.S. Virgin Islands, and Canada.

Researchers will conduct operations at the VLA site and in nearby Socorro, New Mexico, with additional science operations planned to be in a metropolitan area yet to be determined.

Scientists say the ngVLA will have sensitivity to detect faint objects and resolving power more than ten times greater than the current VLA. Such capabilities could address fundamental questions in all significant areas of astrophysics. They would complement the Atacama Large Millimeter/submillimeter Array (ALMA) and other planned instruments such as the lower-frequency Square Kilometer Array. It also will complement the capabilities of the US-ELT optical telescopes and the orbiting James Webb Space Telescope, which will operate at infrared wavelengths and is scheduled for launch in December 2021.

The Astro 2020 describes the new array as a facility that “would be absolutely unique worldwide in both sensitivity and frequency coverage.”

“It is of essential importance to astronomy that the VLA and Very Long Baseline Array be replaced by an observatory that can achieve roughly an order of magnitude improvement in sensitivity, compared to these facilities.”

This article was originally published on Universe Today by Nancy Atkinson. Read the original article here.