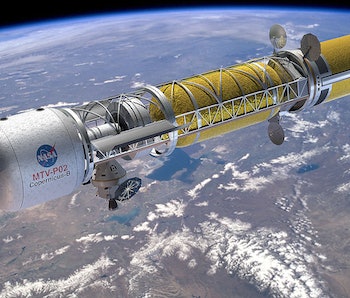 We live in an era of renewed space exploration, where multiple agencies are planning to send astronauts to the Moon in the coming years. This will be followed in the next decade with crewed missions to Mars by NASA and China, who may be joined by other nations before long. These and other missions that will take astronauts beyond Low Earth Orbit (LEO) and the Earth-Moon system require new technologies, ranging from life support and radiation shielding to power and propulsion. And when it comes to the latter, Nuclear Thermal and Nuclear Electric Propulsion (NTP/NEP) is a top contender.

The race to space

The proposal, titled “Bimodal NTP/NEP with a Wave Rotor Topping Cycle,” was put forward by Ryan Gosse, the Hypersonics Program Area Lead at the University of Florida and a member of the Florida Applied Research in Engineering (FLARE) team. Gosse’s proposal is one of 14 selected by the NAIC this year for Phase I development, which includes a $12,500 grant to assist in maturing the technology and methods involved. Other proposals included innovative sensors, instruments, manufacturing techniques, power systems, and more.

How it works — Nuclear propulsion essentially comes down to two concepts, both of which rely on technologies that have been thoroughly tested and validated. For Nuclear-Thermal Propulsion (NTP), the cycle consists of a nuclear reactor heating liquid hydrogen (LH2) propellant, turning it into ionized hydrogen gas (plasma) that is then channeled through nozzles to generate thrust. Several attempts have been made to build a test this propulsion system, including Project Rover, a collaborative effort between the U.S. Air Force and the Atomic Energy Commission (AEC) that launched in 1955.

A new era for nuclear

In 1959, NASA took over from the USAF, and the program entered a new phase dedicated to spaceflight applications. This eventually led to the Nuclear Engine for Rocket Vehicle Application (NERVA), a solid-core nuclear reactor that was successfully tested. With the closing of the Apollo Era in 1973, the program’s funding was drastically reduced, leading to its cancellation before any flight tests could be conducted. Meanwhile, the Soviets developed their own NTP concept (RD-0410) between 1965 and 1980 and conducted a single ground test before the program’s cancellation.

Nuclear-Electric Propulsion (NEP), on the other hand, relies on a nuclear reactor to provide electricity to a Hall-Effect thruster (ion engine), which generates an electromagnetic field that ionizes and accelerates an inert gas (like xenon) to create thrust. Attempts to develop this technology include NASA’s Nuclear Systems Initiative (NSI) Project Prometheus (2003 to 2005). Both systems have considerable advantages over conventional chemical propulsion, including a higher specific impulse (Isp) rating, fuel efficiency, and virtually unlimited energy density.

While NEP concepts are distinguished for providing more than 10,000 seconds of Isp, meaning they can maintain thrust for close to three hours, the thrust level is quite low compared to conventional rockets and NTP. The need for an electric power source, says Gosse, also raises the issue of heat rejection in space — where thermal energy conversion is 30 to 40 percent under ideal circumstances. And while NTP NERVA designs are the preferred method for crewed missions to Mars and beyond, this method also has issues providing adequate initial and final mass fractions for high delta-v missions.

This is why proposals that include both propulsion methods (bimodal) are favored, as they would combine the advantages of both. Gosse’s proposal calls for a bimodal design based on a solid core NERVA reactor that would provide a specific impulse (Isp) of 900 seconds, twice the current performance of chemical rockets. Gosse proposed cycle also includes a pressure wave supercharger — or Wave Rotor — a technology used in internal combustion engines that harnesses the pressure waves produced by reactions to compress intake air.

When paired with an NTP engine, the Wave Rotor would use pressure created by the reactor’s heating of the LH2 fuel to compress the reaction mass further. As Gosse promises, this will deliver thrust levels comparable to that of a NERVA-class NTP concept but with an Isp of 1400-2000 seconds. When paired with a NEP cycle, said Gosse, thrust levels are enhanced even further:

“Coupled with a NEP cycle, the duty cycle Isp can further be increased (1800-4000 seconds) with minimal addition of dry mass. This bimodal design enables the fast transit for manned missions (45 days to Mars) and revolutionizes the deep space exploration of our solar system.”

Based on conventional propulsion technology, a crewed mission to Mars could last up to three years. These missions would launch every 26 months when Earth and Mars are at their closest (aka a Mars Opposition) and would spend a minimum of six to nine months in transit. A transit of 45 days (six and a half weeks) would reduce the overall mission time to months instead of years. This would significantly reduce the major risks associated with missions to Mars, including radiation exposure, the time spent in microgravity, and related health concerns.

In addition to propulsion, there are proposals for new reactor designs that would provide a steady power supply for long-duration surface missions where solar and wind power are not always available. Examples include NASA’s Kilopower Reactor Using Sterling Technology (KRUSTY) and the hybrid fission/fusion reactor selected for Phase I development by NASA’s NAIC 2023 selection. These and other nuclear applications could someday enable crewed missions to Mars and other locations in deep space, perhaps sooner than we think!

This article was originally published on Universe Today by Matt Williams. Read the original article here.