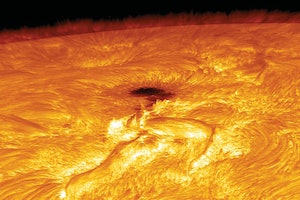 NASA: Scientists may have unraveled the mystery behind sunquakes

In July 2011, a short-lived disturbance originating from the interior of the Sun resulted in a series of unusually sharp circular ripples on the star's surface. The event was sort of like an earthquake but on a boiling ball of plasma.

This particularly powerful sunquake's ripples emanated from a rather strong solar flare. Recently, scientists tracked down the source of these powerful surface disturbances — shocked to find they stemmed from beneath the Sun's surface.

The new findings are detailed in a study published in The Astrophysical Journal Letters. This information marks a critical step toward a better understanding of the physical mechanics that govern Earth's host star.

Astronomers first observed sunquakes in 1998 while looking over data collected by NASA's Solar and Heliospheric Observatory. The 11th magnitude quake was recorded immediately after a solar flare erupted from the Sun (solar flares are an intense burst of radiation linked to the Sun's magnetic energy).

As seen in the image above, the ripples caused by the Sunquake resemble those created by a rock thrown into a pond.

Before they were able to actually observe a sunquake, astronomers predicted this solar phenomenon could occur. In 1972, a team of astronomers theorized that a powerful solar flare could raise the temperature of the Sun's interior, causing a mechanical impulse that would result in a sunquake.

However, sunquakes are still shrouded in mystery. This is because they don't appear to be caused by every solar flare that erupts from the star and are only seen in specific locations on the Sun's surface.

Understanding the magnitude and evolution of these quakes can help scientists better understand the very nature of solar flares, as well as the conditions of the Sun's interior.

Although Sunquakes were proven to exist, scientists were still unable to identify the source of these ripples.

Some believe that Sunquakes are driven by magnetic forces or heating of the outer atmosphere caused by the eruption of a solar flare. Others theorize these ripples dive down through the Sun’s surface and travel deep into its interior. However, this recent study proved otherwise.

Using data from NASA’s Solar Dynamics Observatory, scientists chased down the source of powerful ripples that followed a bright solar flare in 2011 using a technique called helioseismic holography. These ripples are essentially acoustic energy and helioseismic holography, in turn, measures the movement of this energy on the Sun's surface.

However, much to the scientists' surprise, the ripples didn't seem to be coming from above as they had previously thought. Instead, the source of the ripples was emanating from deep within the surface of the Sun.

The newly collected data showed that the acoustic source was around 700 miles below the Sun's surface rather than above the surface.

However, scientists still don't know the exact cause of the acoustic waves — only that the source is submerged.

This submerged source, it's theorized, was triggered by solar flares. Next, the study team plans on conducting further observations of future Sunquakes to find out if they share the same source.

Abstract: We report the discovery of ultra-impulsive acoustic emission from a solar flare, emission with a seismic signature that indicates submersion of its source approximately a Mm beneath the photosphere of the active region that hosted the flare. Just over two decades ago V. V. Zharkova and A. G. Kosovichev discovered the first acoustic transient released into the Sun's interior by a solar flare. These acoustic waves, refracted back upward to the solar surface after their release, make conspicuous Doppler ripples spreading outward from the flaring region that tell us a lot about their sources. The mechanism by which these transients are driven has stubbornly eluded our understanding. Some of the source regions, for example, are devoid of secondary Doppler, magnetic, or thermal disturbances in the outer atmosphere of the source regions that would signify the driving agent of an intense seismic transient in the outer atmosphere. In this study, we have applied helioseismic holography, a diagnostic based upon standard wave optics, to reconstruct a 3D image of the sources of acoustic waves emanating from the M9.3-class flare of 2011 July 30. These images contain a source component that is submerged a full Mm beneath the active-region photosphere. The signature of acoustic sources this deep in the solar interior opens new considerations into the physics that must be involved in transient acoustic emission from flares—and possibly of flare physics at large. We develop analogies to seismicity remotely triggered by tremors from distant earthquakes, and consider prospects of new insight into the architecture of magnetic flux beneath flaring active regions.

More like this
Science
Jan. 26, 2023
Lucy mission: NASA goals, mission updates, and Beatles Easter eggs
By Passant Rabie, John Wenz and Doris Elín Urrutia
Science
Jan. 29, 2023
This nuclear-powered X-ray “flashlight” may help scientists probe the Moon for water
By Andy Tomaswick and Universe Today
Science
Feb. 6, 2023
How the Webb Telescope is Rewriting What We Know About the Early Universe, One Galaxy at a Time
By Doris Elín Urrutia
LEARN SOMETHING NEW EVERY DAY.
Related Tags
Share: