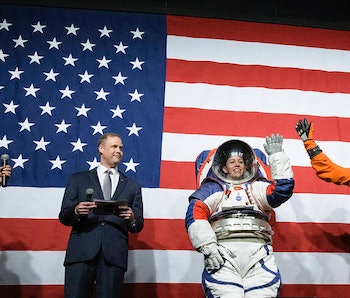 This may be the most exciting job listing of all time. NASA is looking for the next Neil Armstrong.

On Tuesday, the space agency put out a call for applications for a new generation of astronauts. The lucky few chosen will get quite the bonus: The promise of leaving their footprints on the lunar surface.

A new era of space exploration — returning humans to the Moon and sending the first humans to Mars — requires astronauts. And so NASA has opened the doors to applications from would-be Artemis astronauts that they can send to the Moon by 2024.

NASA is accepting applications between March 2 and March 31. But aside from an undying love for space, applicants have to fulfill two crucial requirements. To qualify, you must:

If you qualify, then you can apply. But know that rigorous tests lie ahead: As part of the application process, candidates undergo a two-hour online assessment, in addition to a long-duration spaceflight physical test.

The astronaut candidates will be selected by mid-2021, when they will begin their training program for Artemis — and being sent to the Moon.

Aside from lunar ambitions, the new astronauts may also board the International Space Station, located 250 miles above Earth. There they would take part in NASA’s scientific experiments, following in the space-boot steps of the record breaking astronaut Christina Koch.

Earlier in January, NASA welcomed 11 new astronauts to its pool after they completed two years of basic training. These 11 are the first class of astronauts to graduate from the agency after its lunar plans were put in place — one, or several, of them may be sent to the Moon in the next decade.

The 11 astronauts were selected from more than 18,000 applications — increasing the total number of active astronauts at NASA to 48.

“With 48 astronauts in the active astronaut corps, more will be needed to crew spacecraft bound for multiple destinations and propel exploration forward as part of Artemis missions and beyond,” NASA said in a statement.

In the past, NASA kept up to 350 astronauts on deck as part of large-scale missions like Apollo, with the candidates ready to take on the next space exploration challenge.

The new generation of astronauts will be prepped for a series of upcoming missions that will lead up to a human landing on the Moon. The astronauts will fly onboard the Space Launch System rocket and the Orion spacecraft. But the first step to the Moon is an un-crewed flight test, scheduled for the year 2021.

Following the Artemis I test mission, Artemis II will involve a manned spacecraft orbiting the Moon. Last but not least, Artemis III will take humans all the way, landing on a manned mission on the lunar surface.

By 2028, NASA hopes to establish sustainable exploration of the Moon, and build a human landing system on the lunar surface. The system will help pave the way for a future human mission to Mars, currently planned for the mid 2030’s.

NASA is also keen to send the first female astronaut to the Moon. Indeed, the mission name, Artemis, was inspired by the Greek Goddess, who was also Apollo’s sister.

Those hoping to shoot for the Moon should apply to become a next-generation NASA astronaut by following this link: http://www.usajobs.gov/.