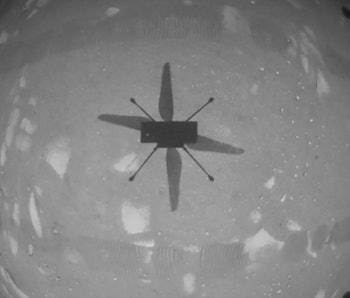 The feat took place at around 3:30 a.m. Eastern time, but for the next few hours, no one knew if it worked. Ingenuity’s team back on Earth had to wait for a data downlink from Ingenuity and the nearby Perseverance Mars rover to arrive via the Deep Space Network.

Around 6:40 a.m. Eastern time, the first sign of success came in the form of a data plot from Ingenuity’s altimeter, which showed that the little helicopter climbed to about three meters above the Martian surface and hovered there for a moment before landing.

The entire flight lasted about 40 seconds. That sounds brief, but the Wright Flyer made history by flying for just 12 seconds in 1903.

“Altimeter data confirms that Ingenuity has performed its first flight, the first flight of a powered aircraft on another planet,” said Ingenuity’s chief pilot Håvard Grip. Processing flight data isn’t usually a performance art, but Grip and his team found themselves processing Ingenuity’s first flight data in front of a live international audience at about 3:45 a.m. local time.

The first photos and video of the flight arrived soon after the altimeter data. Ingenuity sent home a black-and-white photo of its own shadow on the rocky ground of Jezero Crater, snapped with the helicopter’s downward-facing camera as it hovered. Nearby, Perseverance recorded a brief video of the flight with Mastcam-Z, the high-resolution camera atop the rover’s mast.

NASA Ingenuity: Why flying a helicopter on Mars is a major challenge

Flight on Mars presents special challenges because the Martian atmosphere is only about one percent as dense as Earth’s. To generate enough lift to fly, a Martian aircraft like Ingenuity needs to be very light, with relatively large wings — or rotor blades — for its size.

Ingenuity weighs just four pounds here on Earth and 1.5 pounds on Mars, but its two pairs of 1.2 meter-long rotor blades have to spin at over 5,000 RPM to get the helicopter into the air. Here on Earth, a helicopter of the same size would have smaller blades, and they would need to spin at only a few hundred RPM.

While waiting for the first flight data to arrive on Monday morning, she revealed that the new software allowed the helicopter to successfully transition to flight mode about 85 percent of the time – which means that when the big moment came Monday morning, there was a 15 percent chance that Ingenuity would shut itself down again and wait for another attempt.

Instead, everything went smoothly. Other data from the helicopter’s onboard systems reported that after landing, the rotors had safely spun to a stop. Ingenuity is now sitting safely on the ground, awaiting its next flight.

What’s next for the Mars Ingenuity helicopter?

Over the next month, Ingenuity will make a series of five flights, each higher and farther than the last. The series of flights will culminate in Ingenuity flying about 300 meters across the Martian ground at an altitude of about 4.5 meters. That final flight will last around 90 seconds, which is as long as Ingenuity’s solar-charged lithium-ion battery can power the helicopter without landing for a recharge.

The team will have to make the most of the time before Perseverance moves on to explore Jezero Crater, taking Ingenuity’s communications link to Earth with it. In a preflight briefing last week, Aung hinted that as time runs out, Ingenuity’s flight plans are likely to take a few more risks and push the limits of flight on Mars.

“We've been talking so long about our Wright brothers moment on Mars, and here it is,” said Aung. “History does tell us that soon after that first flight, Wilbur and Orville went right back to work.”

More like this
Science
Feb. 1, 2023
65 Years Ago, America Launched Its Most Pivotal Space Mission Ever
By Jon Kelvey
Science
Jan. 29, 2023
NASA-funded study to research if bacteria could help form building materials on Mars
By Matt Williams and Universe Today
Science
Jan. 22, 2023
This nuclear-powered rocket could get humans to Mars in less than 2 months
By Universe Today and Matt Williams
LEARN SOMETHING NEW EVERY DAY.
Related Tags
Share: