Milky Way's comets baffle scientists with a "so unlikely" discovery

“Everybody likes a good mystery.” 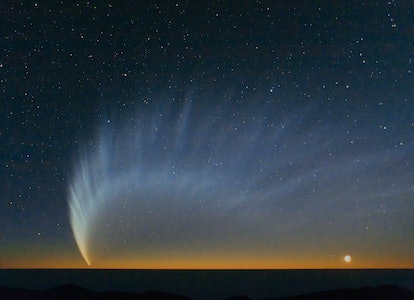 Cue the Slayer: It turns out that comets are low-key metal.

For the first time ever, astronomers have identified iron and nickel vapor in the atmospheres of comets from our Solar System and beyond, a result that is baffling researchers.

“Everybody likes a good mystery,” Auburn University physics professor Dennis Bodewits tells Inverse. “Once you know they’re there, you can’t miss them. But they were so unlikely you wouldn’t expect them.”

A pair of papers published Wednesday in Nature describes a strange commonality between the interstellar comet 2I/Borisov and comets within our Solar System. The finding — the first-ever detection of iron and nickel in the coma of comets — has no easy explanation and shows that researchers still have a great deal more to learn about these fluffy ice balls.

What’s new — That there are metallic compounds in comets isn’t itself surprising. Comets are the icy leftovers of the Solar System’s creation, and rocky bodies — including Earth — are full of metallic materials.

Decades of watching these space rocks plunge into or graze the Sun have allowed researchers to suss out the chemicals within comets. So far, they have identified elements like iron, nickel, copper, cobalt, and manganese in the comets’ interiors.

But iron and nickel require temperatures greater than 725 degrees Celsius to become vapor, making their detection in chilly comet atmospheres all the more unusual. Astronomers simply don’t know exactly how these elements were able to make it into a gaseous form.

Because this seems true of Solar System comets but also an interstellar object, the researchers suggest this phenomenon may be a critical aspect of comets, whether they originate from near, far, and very, very far from Earth.

How they did it — Using archival data going back to 2002 from the European Southern Observatory’s Very Large Telescope (VLT) in Chile, a team of researchers spotted nickel and iron sputtering from the surfaces of 20 diverse comets. These comets typically live in the outer reaches of the Solar System. All were spotted while passing through the inner Solar System on their extremely long-term orbits, with the most distant one seen when it was around 480 million kilometers from the Sun — near to the orbit of Mars.

As detailed in the first paper, the 20 comets all appeared to be shedding these improbable metals — as much as a gram of material per second in some cases. This is a teensy quantity compared to the roughly 100 kilograms of water per second that spurts from most comets as they bask in the Sun’s warmth, but then comets largely consist of frozen water and other ices.

The other of the two papers describe comet 2I/Borisov, an icy object discovered in 2019 which came from somewhere beyond our Solar System. It, too, appears to have nickel vapor spurting from its surface, adding more intrigue to the saga of this interstellar enigma.

So, what’s causing these metals to leak out? Steven Bromley, a postdoc at Auburn University and co-author with Bodewits, says that it’s a mystery.

“The short answer is we don’t know,” Bromley tells Inverse. There are some theories, however.

But the fact that similar leakage seems to be happening on 2I/Borisov suggests that whatever chemical processes are happening in the comets of our local neck of the universe, they are also happening elsewhere, Bodewits says.

What’s next — Astronomers, including Bodewits and Bromley, are now hoping to comb through other archives to see if they can find additional evidence for metals, or other interesting results.

“These observations were hiding in plain sight,” Bromley says. “Who knows what else is hidden in that data?”

Comets are of increasing interest as our robotic explorers become ever more able to explore these icy space rocks. For instance, the European Space Agency’s Rosetta mission orbited and surveyed comet 67P/Churyumov–Gerasimenko from 2014 to 2016. Engineers at both NASA and ESA have plans for future missions that could bring samples from a comet back to Earth, potentially allowing scientists to get a better handle on where these metals are coming from.

But until that happens, researchers are left with a lot of exciting questions.

“This is a really nice mystery,” Bodewits says. “We don’t really understand the physics or the chemistry.”

Abstract: In comets, iron and nickel are found in refractory dust particles or in metallic and sulfide grains. So far, no iron- or nickel-bearing molecules have been observed in the gaseous coma of comets. Iron and a few other heavy atoms, such as copper and cobalt, have been observed only in two exceptional objects: the Great Comet of 1882 and, almost a century later, C/1965 S1 (Ikeya–Seki). These sungrazing comets approached the Sun so closely that refractory materials sublimated, and their relative abundance of nickel to iron was similar to that of the Sun and meteorites. More recently, the presence of iron vapour was inferred from the properties of a faint tail in comet C/2006 P1 (McNaught) at perihelion, but neither iron nor nickel was reported in the gaseous coma of comet 67P/Churyumov–Gerasimenko by the in situ Rosetta mission. Here we report that neutral Fe I and Ni I emission lines are ubiquitous in cometary atmospheres, even far from the Sun, as revealed by high-resolution ultraviolet–optical spectra of a large sample of comets of various compositions and dynamical origins. The abundances of both species appear to be of the same order of magnitude, contrasting the typical Solar System abundance ratio.