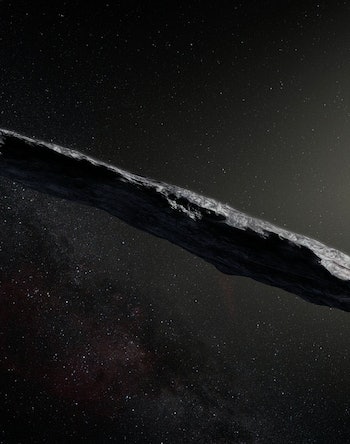 On September 9, 2017, a rocky, elongated body (sort of shaped like a cigar) slingshotted past the Sun at a speed of 196,000 miles per hour. The object, named Oumuamua, was the first known interstellar visitor to our Solar System — essentially, an alien comet.

Two years later, amateur astronomer Gennady Borisov discovered a second alien comet in the sky above Crimea on August 30, 2019. Comet Borisov and Oumuamua are interstellar curiosities — and, curiously, they happened to appear in our skies within a relatively short window of time.

Their appearance is something of a cosmic mystery. Astronomers have long believed that comets are the leftover scraps from early formation o the Solar System. The theory went that during that time, comets were scattered into our Solar System’s outer regions as the giant planets grew bigger and bigger.

But a new study, published in the Monthly Notices of the Royal Astronomical Society, proposes a different origin theory for these traveling bodies.

If the theory holds, there could be more of these alien comets orbiting the Sun that we just don’t know about yet. If we do observe them, they could provide a unique opportunity for astronomers to study the composition of planetary bodies that form outside of our Solar System.

The comets that we observe in our sky are believed to come from two sources. Long period comets, which take more than 200 years to orbit around the Sun, are thought to come from Oort Cloud, a shell of icy objects in the outermost region of the Solar System. Those that take less than 200 years to orbit the Sun, or short period comets, come from the Kuiper Belt, a region of the Solar System beyond Neptune.

But the researchers behind the new study believe that some of the comets we see may actually be interstellar comets that have been captured by the Sun’s gravity as they travel through the cosmos.

The team created simulations of 400 million comets as they traveled towards the Sun and Jupiter. The simulations were based on data gathered from the GAIA mission, a space observatory that was launched in 2013.

In some cases, the team observed that the trajectory of the comets was altered by Jupiter, causing them to be bound to the inner Solar System.

“Although the capture probability is small, there could be anywhere from a few hundred to hundreds of thousands of these alien comets orbiting the Sun,” Tom Hands, a researcher at the University of Zurich, Switzerland, and co-author of the study, said in a statement.

Together, Comet Borisov and Oumuamua give scientists a new perspective on these mysterious bodies, made up of ice, dust and gases.

“Imagine in your lifetime, the first and second object that we’ve ever known [were discovered].” Keith Noll, chief for the Planetary Systems Laboratory at NASA’s Goddard Space Flight Center, who was not involved in the study, tells Inverse.

Comets can help scientists answer some of the most pressing questions on planetary formation, how planets came to be and what they are made of.

“A lot of the research effort is trying to understand how did we get to where we are, on Earth or other planets. Comets might be able to tell you that,” Noll says.