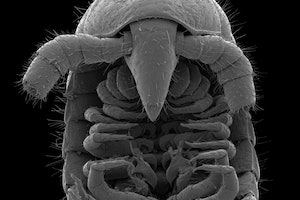 Eumillipes persephone is a creature unlike any other: It uses the pulsing rings on its body to burrow deep underground, where it keeps cool from the scorching Australian sunshine.

What’s new — Eumillipes persephone is the first true millipede ever discovered. In a study published Thursday in the journal Scientific Reports, researchers reveal they found the ostentatiously limbed creature in a mining excavation site in western Australia. The discovery brings us one step closer to understanding these elusive creatures, which may be at risk of extinction.

“Here we report the discovery of E. persephone, the first super-elongated millipede known from Australia, and the new world record holder of the animal with greatest number of legs,” the scientists proudly declare in the paper.

How the discovery was made — In August 2020, scientists identified a “pale, thread-like millipede” in the Goldfields region of Western Australia — an arid place known for surface mining — hidden 60 meters below the surface in a drilling hole.

It turns out there were more millipedes lurking in other nearby drilling holes — the scientists used special traps called trogtraps baited with moist leaves to snare the leggy creatures, collecting eight millipedes in total.

Afterward, the scientists extracted and sequenced DNA from the specimens. Finally, they observed the millipedes under a microscope, confirming that they were, indeed, the first true millipedes.

What they found — The new species of millipede, Eumillipes persephone, is the first millipede known to have more than 1,000 legs —1,306, to be precise. Even though “millipede” translates to “a thousand feet,” no millipede with more than 750 legs has been discovered before.

The scientists’ analysis also yields intriguing clues into how this creature survives. It is “super elongated,” which means it is composed of more than 180 segments that help it move underground. The scientists found a whopping 330 segments on one of the female specimens.

Sliding rings on the creature’s “super-elongated” body, along with its 1,306 legs, help propel the millipede forward. This motion enables it to tunnel through the soil. Its legs may be shorter than other millipedes, but the quantity may be more important than quality in this case.

“The increase in leg number likely contributes more pushing power to force through small crevices and openings,” the researchers write.

The scientists also identified a “striking morphological similarity” between E. persephone and I. plenipes — the previous record-holder millipede from California that has up to 750 legs. The findings are a curious example of convergent evolution, which occurs when two species in different locations evolve a similarly beneficial trait — a whole lot of legs, in this case.

Why it matters — This discovery might not seem like a big deal to non-millipede enthusiasts, but this finding provides unique insight into one of Earth’s most ancient animal lineages.

Millipedes have lived on Earth for more than 400 million years and are likely one of the “earliest animals to breathe atmospheric oxygen,” according to the research. They help decompose plant and fecal matter in many ecosystems.

But despite their significance, “primary knowledge of millipede diversity lags tremendously behind other animal groups,” the scientists write. So, scientists are still trying to figure out the sheer number and kinds of different millipedes, though this latest discovery brings them one step closer.

This new species is especially intriguing because scientists aren’t entirely sure how E. persephone wound up underground.

But the researchers have a hunch: One theory proposes that, as temperatures became too hot and dry in ancient Earth, millipedes and other cool-adapted animals burrowed underground, where temperatures were more stable.

“These underground habitats, and their inhabitants, are critically understudied, despite their ecological importance in filtration of groundwater and screening of environmental toxins,” the scientists add.

What’s next — Sadly, the discovery may come too late to save the world’s “first true millipede.”

The area where it was discovered — the Goldfields-Esperance region in western Australia — remains a hotbed of surface mining explorations. Much of Australia’s gold, nickel and other minerals are extracted from this region.

Mining underground involves drilling holes that disrupt the habitat and threaten the survival of E. persephone. The world’s first millipede may disappear soon after its discovery if humans don’t act quickly to protect it.

As the researchers grimly conclude: “threatened by encroaching surface mining, documentation of this species and conservation of its habitat are of critical importance.”

Abstract: The name “millipede” translates to a thousand feet (from mille “thousand” and pes “foot”). However, no millipede has ever been described with more than 750 legs. We discovered a new record-setting species of millipede with 1,306 legs, Eumillipes persephone, from Western Australia. This diminutive animal (0.95mm wide, 95.7mm long) has 330 segments, a cone-shaped head with enormous antennae, and a beak for feeding. A distant relative of the previous record holder, Illacme plenipes from California, it belongs to a different order, the Polyzoniida. Discovered 60m below ground in a drill hole created for mineral exploration, E. persephone possesses troglomorphic features; it lacks eyes and pigmentation, and it has a greatly elongated body—features that stand in stark contrast to its closest surface-dwelling relatives in Australia and all other members of its order. Using phylogenomics, we found that super-elongation (>180 segments) evolved repeatedly in the millipede class Diplopoda. The striking morphological similarity between E. persephone and I. plenipes is a result of convergent evolution, probably for locomotion in similar soil habitats. Discovered in the resource-rich Goldfields-Esperance region and threatened by encroaching surface mining, documentation of this species and conservation of its habitat are of critical importance.