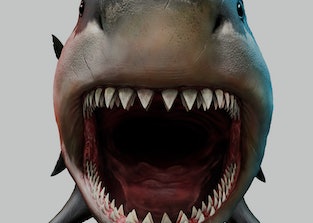 The largest shark baby ever born

Megalodon: This ancient predator gave birth to babies the size of adult humans

The Megalodon has terrified the hearts and captivated the minds of scientists — and movie lovers — for ages.

But for all the curious interest, we're still piecing together information about the ancient beast that lived some 3.6-15 million years ago. Did a supernova kill off the Megalodon or was their demise simply due to competition over scarce resources? And just how massive was this monster shark, exactly?

Most of the research to date has focused on the Megalodon's frightening teeth, but a new study published in the journal Historical Biology turns to a surprising part of the monster shark for research: its spine.

It turns out there is a surprising amount of data hidden in the Megalodon's vertebrae, including its immense size as a baby.

CT technology revealed that these vertebrae contain 46 bands. In living sharks, each band marks a year of growth, so researchers assume that the same would apply to the ancient Megalodon. Therefore, scientists conclude that the shark was 46 years old at the time of death.

They back-dated the shark's approximate body length at each band (i.e., how long was the shark at band 45, 44, and so on).

Through this approach, the scientists gathered that the baby shark was 6.6 feet at birth. By comparison, the average adult man in the U.S. is 5' 9". That's the size of Johnny Depp, Sylvester Stallone, or Jamie Foxx.

Based on the existing literature, the Megalodon quite possibly gave birth to the largest shark babies in the world — past or present.

This big size would have allowed the Megalodon to survive in a hostile marine environment, giving it a competitive edge from birth.

Study co-author Martin Becker says in a press statement: “My students and I examine spiny dogfish shark anatomy in class and to think that a baby Megalodon was nearly twice as long as the largest adult sharks we examine is mind-boggling.”

Digging into the details — Given the baby's large size, the study confirms that the Megalodon, gave birth live, just like many sharks.

The study also offers some insight into just how this baby shark got so big. It has to do with the shark's unique ovoviviparous reproductive system. This system is a sort of hybrid between egg-laying (oviparous) behavior and viviparous behavior, which is when the mother nurtures the embryo inside her body.

As it turns out, baby lamniform sharks — like the Megalodon — often engage in a gruesome, cannibalistic practice known as oophagy. Oophagy — literally meaning "egg eating" — occurs when growing embryos consume their unhatched egg siblings while still in the womb.

So, the Megalodon literally ate its siblings to become the massive beast of myth and legends.

But despite the Megalodon's impressive size at birth, it maintained a fairly moderate annual growth, increasing by an average of 6.1 inches per year.

The study also provides an insight into the Megalodon's maximum lifespan. According to the study's rough calculations based on a growth model of the vertebrae, the Megalodon could have theoretically lived to be 500 years old.

But before you get too excited, the study offers a huge caveat: this finding probably isn't accurate. After all, the scientists can only chart the Megalodon's lifespan based on the 46-year-old specimen they have. Estimating the shark's lifespan beyond that gets a little complicated.

When adjusting for these factors, the scientists conclude that the Megalodon had a maximum life expectancy of at least 88-100 years.

Why it matters — The study offers a ground-breaking first look at the Megalodon's size and life history through its spine.

“Results from this work shed new light on the life history of Megalodon, not only how Megalodon grew, but also how its embryos developed, how it gave birth and how long it could have lived," says Becker.

But if you're not as obsessed with the Megalodon as those of us at Inverse, then why should you care about this finding?

Due to its massive size and predator status, the Megalodon undoubtedly impacted its marine environment. It's also a member of the Lamniformes shark family, which includes the menacing great white shark of Jaws fame.

Understanding the Megalodon can help us research the impact of big predators in marine ecosystems today.

Kenshu Shimada, a paleobiologist at DePaul University in Chicago and lead author of the study, says in a press statement: "As one of the largest carnivores that ever existed on Earth, deciphering such growth parameters of O. megalodon is critical to understand the role large carnivores play in the context of the evolution of marine ecosystems."

What's next — As exciting as this new research may be — or frightening, depending on your perspective — there are still plenty of lingering questions about the report's methodology.

For example, the study authors acknowledge that their study rests on the application of their technology to a single Megalodon specimen, limiting the extent to which we can use these findings to answer bigger questions about the monster shark.

But it's still worth keeping an eye on Shimada and company, whose previous studies greatly expanded our knowledge of this ancient super predator. Their newest work is just the latest entry in a long line of research.

The study states, "Nonetheless, our study is the first of its kind for the iconic species, taking the science of O. megalodon one step further."

Abstract: The extinct megatooth shark, Otodus megalodon (Lamniformes: Otodontidae), is known primarily from its gigantic teeth in the late Neogene marine fossil record. It is known to reach at least 14.1‒15.3 m in length, but its reproductive biology and ontogenetic growth pattern have remained largely in the realm of speculation. Here, we examined incremental growth bands in fossil vertebrae of a 9.2-m-long individual O. megalodon, revealing that the shark was born large, 2 m in length, and died at age 46. This large size at birth is characteristic of lamniform sharks and is indicative of live-bearing reproduction along with embryos’ intrauterine cannibalism behaviour in the form of oophagy. The trajectory of the generated growth curve beyond the age of death and the maximum length (about 15 m) calibrated from the largest known teeth of O. megalodon suggest that the species had a lifespan of at least 88–100 years with an average growth rate of about 16 cm/yr at least for the first 46 years. As one of the largest carnivores that ever existed on Earth deciphering such growth parameters of O. megalodon is critical to understand the role large carnivores play in the context of the evolution of marine ecosystems.

More like this
Science
6.22.2022 8:26 PM
Yes, there are mites living on your face — and they can poop, a new study finds
By Allison Parshall
Science
7.5.2022 12:00 PM
The greatest dinosaur sci-fi franchise ever reveals a problematic genetics debate
By Andrew Maynard and The Conversation
Science
7.2.2022 12:00 PM
Why is my cat scratching furniture? The answer might surprise you
By Tara Yarlagadda
Related Tags
Share: