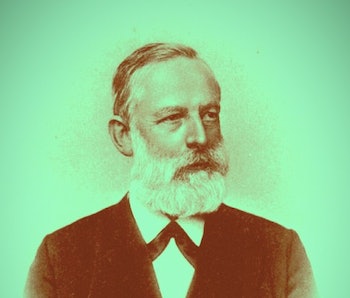 It’s Julius Lothar Meyer’s day to shine. The scientist, one of two to independently create a modern periodic table, often rests in the historic shadow of Dmitri Mendeleev. But Meyer, who has been highlighted by Google through a Google Doodle today, actually created a critical system first. He later made advances that play into how periodic tables are seen today.

A time of great upheaval — Meyer and Mendeleev share more than a common quest. The two actually shared the same teacher — Robert Busen, famous in his own right — at the University of Heidelberg a mere five years apart. By 1860, the two young scientists both attended the first-ever international gathering of chemists, known as the Karlsruhe Congress.

At Karlsruhe, Meyer was introduced to the concept of measuring atomic weights. The 1850s and 1860s were decades of vast, exciting scientific discoveries: Just a year before Karlsruhe, Charles Darwin had published his seminal On the Origin of Species, shattering old concepts with the idea of evolution. The next year, Bunsen would help make breakthroughs in the field of spectral analysis.

As discoveries progressed, a need came to help organize them. That's where Meyer comes in.

The big breakthrough — Meyer spent this time as an educator, working at the University of Tübingen in southern Germany. In 1864, he released his own textbook, Die modernen Theorien der Chemie, or Modern Chemical Theory, which he dedicated to Bunsen. Here, Meyer worked out ideas that both science and industry were craving: how to map out and identify the properties of elements, in hopes of understanding them and creating new mixtures.

Looking at how atomic weights and how they related to the properties of the elements, Modern Chemical Theory proved to be popular in Germany and was revised several times. The textbook included Meyer’s version of periodic table, including 28 elements split into 6 families, based on similarities in physical and chemical composition.

Modern Chemical Theory placed a special emphasis on valence or combining power. Valence looks at many hydrogen atoms that can form with any given element. The compound ammonia provides a good example—composed of nitrogen and hydrogen, with three nitrogen atoms and a singular hydrogen, nitrogen has a valence of three. Meyer demonstrated that, as integral valence changes, the atomic weight of elements increases.

Mendeleev's moment — In Russia, Mendeleev was on a similar path. Working on a chemistry textbook that would eventually be published in 1871, Mendeleev published early papers relating to periodic tables in 1869.

Mendeleev’s work had substantive differences from Meyer’s, some of which would influence future fame. Mendeleev’s work did not just organize all the world’s known elements — it predicted some as well, a stance Meyer was unwilling to take. As the decades and centuries passed, Mendeleev’s predictions would be proven accurate, growing his legend.

In 1870, Meyer published his own table. While lacking in predictions, it showed the same breadth of Mendeleev’s work — and was published a year before Mendeleev's. Meyer was able to make some substantive contributions uniquely, with graphic demonstrations of the relationship between atomic volume and atomic weight.

A life of steady achievement — There appears to have been no serious rivalry between the two men: content with his own contributions and his work as a professor, Meyer never challenged Mendeleev or his followers over who was “first” to the idea of a periodic table. He would spend the last twenty years of his life at Tübingen a respected figure throughout the world of chemistry, if a little anonymous anywhere else.

But the long journey back from anonymity could begin with a single Google Doodle.

This article was originally published on Aug. 19, 2020