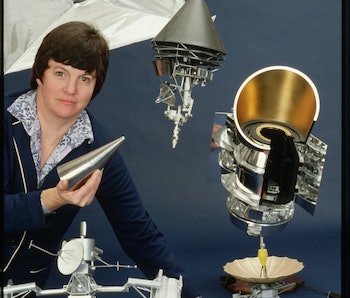 You can think of NASA’s James Webb Space Telescope (JWST) observatory as offering the greatest view of all time. From the big space telescope’s vista point about 1 million miles behind Earth, it has brought us incredible images of swirling galaxies, nebulae resplendent with newborn stars, and some of the most ancient galaxies in the universe.

Those images, that view, are all courtesy of JWST’s beryllium mirrors and exquisitely tuned sensors and instruments, all focused on viewing the cosmos in infrared light. And it could have been very different.

If you step back 40 years ago, infrared astronomy was in its infancy, and the idea of a NASA flagship mission dedicated to infrared photography was all but unthinkable. But on January 25, 1983, the Infrared Astronomical Satellite (IRAS), the very first infrared space telescope, launched from Vandenberg Air Force Base, and changed everything.

There’s a direct line, technically, and spiritually, from IRAS to JWST. What began as almost a Hail Mary pass in 1983, grew into a focused and funded NASA flagship mission in the 2020s. And it all started in the late 1960s.

In the late 60s and early 1970s, “infrared [astronomy] was still very much a nascent field,” Caltech professor of physics Thomas Soifer tells Inverse. “People could build a new kind of detector, put it on a telescope, and point it at anything and make fantastic discoveries.”

Researchers at Caltech had led the Two-Micron Sky Survey, which published the first catalog of infrared sources in the sky in 1969, for instance, and detected stars completely occluded in cocoons of stellar dust for the first time, Soifer says.

“Before then, virtually all of astronomy had been done in visible [light] with photographic plates,” he says.

But infrared astronomy is difficult to do on the ground. The infrared portion of the spectrum includes light of longer wavelengths than the rainbow of visible wavelengths visible to the human eye, and infrared light corresponds to thermal energy (heat). To look for faint heat sources in the far reaches of the universe with a telescope based on the ground, well, “it’s like doing visible astronomy in the middle of the day,” Soifer says — possible, but not ideal.

So when calls for proposals for new missions came down from NASA in the early 1970s, Soifer and a group of other astronomers proposed doing a survey of the sky in the infrared — from outer space. NASA accepted the proposal, and work began on what would become IRAS.

A new design for infrared in orbit

IRAS was a collaboration between NASA and researchers and engineers from the UK and the Netherlands and officially kicked off in 1976, according to Soifer.

“We thought we were going to launch in 1981,” he says, but “there were substantial technical difficulties.” This included figuring out how to cool the IRAS satellite down to below -452.47 Fahrenheit so the satellite wouldn’t blind itself with its own radiant heat. They eventually settled on embedding the satellite in a liquid helium-filled cryostat, but then had to figure out how to keep the liquid in, but allow it to vent over time, according to Soifer.

There was also significant work to be done on developing the infrared detectors for IRAS, in adapting beryllium mirrors from US Air Force missile systems for use in the satellite, and then troubleshooting problems that arose during vacuum chamber testing of the completed IRAS satellite.

“A capacitor failed in this test, and the failure analysis revealed that the problem with the capacitor was a systemic problem in a batch of capacitors that was spread out through the entire satellite,” Soifer says. “What do you do? Do you tear it apart and replace all the capacitors? Or do you just plow ahead and hope that it works?”

The team plowed ahead, but not without a delay which meant it was January 25, 1983, before IRAS sat on the launch pad. Nerves were a tad frayed.

“There was a real fear that the satellite, when it was launched, would be a failure,” Soifer says.

There were fears that it might never make it off the ground. A series of unusual storms sweeping through California kept pushing the launch date until a short clearing of the weather allowed for the launch to go forward.

“And then, shortly thereafter, another storm came through,” Soifer says. “So the skies parted, miraculously for IRAS to be launched. And then astonishingly, to everybody’s surprise, it worked magnificently.”

Unlike the Hubble Space Telescope, which famously required on-orbit modifications to its flawed optics before it could produce usable images, IRAS got to work almost immediately after reaching earth orbit.

“It had to because it was cooled by liquid helium, which is expendable,” Werner says. “So you couldn't afford to waste much time.”

That liquid helium would last for 10 months, during which IRAS identified around 350,000 sources of infrared light in the sky and discovered six comets, among many other discoveries, including that of “infrared, luminous galaxies with radiated 90 to 95 percent of their energy in the infrared,” Werner says.

IRAS also discovered discs of dust and debris around other, typical stars, “and we interpreted that as the residuals from the formation of a planetary system around this star,” Soifer says. “Debris discs were one of the early discoveries that I think really excited the astronomical community.” This included debris discs at Beta Pictoris and Epsilon Eridani, which are now known to have exoplanets; Vega, which has a candidate exoplanet; and Fomalhaut, which has returned ambiguous planetary evidence over time.

But in some sense, the biggest discovery of IRAS was the discovery that there was really something — a lot of something in fact — to see out there in the infrared, assuming you could pop something out of the atmosphere to look.

“The most important legacy was that the infrared wavelengths were definitely worthy of the massive investments,” Soifer says. “If IRAS hadn't worked, then technically, one would have said, ‘well, this is a lost cause.’”

The legacies of IRAS

IRAS was not a lost cause. Instead, it was a trailblazer, and almost immediately so.

The European Space Agency was also deciding what next missions to undertake, and during a meeting in 1983, a fairly IRAS-like proposal called the Infrared Space Observatory (ISO) came up for discussion.

“This happened to be occurring, like literally almost the day, or the day after the cover was popped on IRAS,” Soifer says. “And one of the leaders pushing for this ISO mission came running into this meeting showing the data right after the cover had popped on IRAS showing that there really were objects in the sky that IRAS was seeing.”

Launched in 1995, ISO would go on to discover water vapor in far reaches of the universe, and signs of star formation in distant galaxies.

Then in 2003, NASA launched the Spitzer Space Telescope, for which Werner was the project scientist. The Spitzer telescope would go on to observe the first direct light of an exoplanet, a huge and hidden ring around Saturn, and the presence of the soccer ball-like carbon molecules known ad “Bucky Balls” in outer space, among many other discoveries.

“IRAS laid the groundwork for ISO and Spitzer both technically and scientifically,” Werner says.

ISO and Spitzer made use of infrared detector technology pioneered during the development of IRAS, while Spitzer, like IRAS made use of a beryllium mirror. Beryllium is light and will hold its shape despite wild swings in temperatures, according to Soifer, which is why NASA made use of the material for the now iconic golden honeycombed primary mirror of JWST.

JWST does not rely on a limited quantity of liquid helium to stay cool like Spitzer, ISO, or IRAS, instead relying on radiative cooling and flying a million miles from the warmth of Earth to keep its sensors cold. But JWST does share one other piece of the IRAS legacy: a commitment to sharing data publicly and rapidly.

“Our plan — and this was, I think, one of the real advances — was to process the data and make it available on a rapid timescale to the entire scientific community,” Soifer says, noting his role on the IRAS team was to develop the data system for the project. “In my mind, we were a very revolutionary project.”

“The IRAS database was the first genuine archive made publicly available for research by the community,” instead of remaining in the hands of the team that developed the research project, Werner adds. It foreshadowed the way JWST results are now seized upon by researchers around the blog, who process and share them on Twitter almost at the pace they get beamed down by the space telescope.

It’s a tremendous jump to take in 40 years, to go from the low-hanging fruit of scientific discovery by pointing an infrared telescope in basically any direction to the engineering marvel of JWST looking deeper into the dark of the cosmos than ever before. But it’s a leap that began with IRAS, the legacy of which means infrared astronomy is not only here to stay, it could be the source of some of the most revolutionary discoveries of the next 20 years.

More like this
Science
Feb. 1, 2023
65 Years Ago, America Launched Its Most Pivotal Space Mission Ever
By Jon Kelvey
Science
15 hours ago
How the Webb Telescope is Rewriting What We Know About the Early Universe, One Galaxy at a Time
By Doris Elín Urrutia
Science
Jan. 26, 2023
JWST captures Chariklo’s rings and more: Understand the world through 8 images
By Robin Bea
LEARN SOMETHING NEW EVERY DAY.
Related Tags
Share: