Every second, a star dies in the vast universe.

As it ends its life, the star sheds its material in a massive explosion contorted by the gravity of the stellar being, resulting in bright fireworks of gas and light: A supernova.

Each supernova is unique, depending on the size and type of star. But perhaps none are quite as unique as SN 1987A, one of the brightest supernova ever observed.

A team of scientists recently recreated this supernova in all its three-dimensional glory, finally determining the mysterious origin of this beautiful explosion. And now you can chart its course, too.

Astrophysicists at the RIKEN Institute in Japan have released their 3D simulation of the supernova SN 1987A in action.

The simulation shows the ejected material from the supernova, as it explodes in jets away from the core of the star. The result looks like a cosmic jellyfish floating off into the universe. 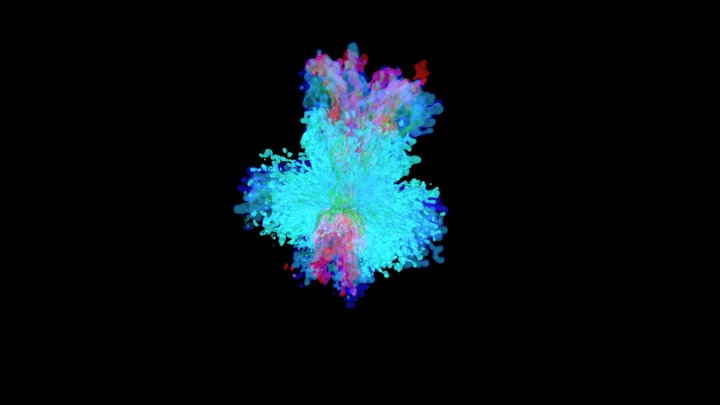 You can observe, and play around with, the 3D model here.

The model accompanies a study investigating the origins of supernova SN1987A.

The research determines that this stunning explosion originated in what is known as a compact blue supergiant, formed by the merger of two stars, a red supergiant and a main-sequence star.

Scientists first observed SN1987A in February, 1987, although the explosion actually took place 160,000 years ago, far away in the universe. That's just how long the light from the supernova took to reach us here on Earth.

The supernova took place in the Large Magellanic Cloud, one of our galaxy's closest neighbors. Due to its proximity, it remained visible in the sky for a few months, reaching peak brightness in May, 1987, and provided astronomers with a rare opportunity to study a supernova up close.

At the time, it was assumed that the origin of the supernova was a red supergiant star, as is the case with most supernovae of that scale. But the data reveal it was actually a blue supergiant.

The findings are detailed in a study published earlier this year in the Astrophysical Journal.

In order to further examine the origin of SN1987A, the team of scientists behind the new study created four different simulations of the supernova explosion from different types of origin star.

Their results show that the origin star behind this particular supernova was the result of a violent merger between two stars. Stars are often pulled together through their gravitational pull, and they eventually merge together as one star.

As they merged, a larger red supergiant star stripped the material of its smaller companion. The material then spiraled inwards towards the larger star's belly, forming a rapidly rotating, blue, supergiant star.

That star was the origin star behind SN1987A.

But mysteries remain regarding the history of SN 1987A — like what happened after the supernova took place.

Following a supernova, the core of the star is compressed by the gravity and often results in the birth of a neutron star. But perhaps surprisingly for such a large object, the resulting neutron star from SN 1987A has eluded scientists' for more than 30 years, leading them to believe it may have been kicked away as part of the ejected material from the supernova.

But armed with this same simulation model scientists could finally be close to locating this missing neutron star. If it is anywhere near as beautiful as the supernova that preceded it, we can't wait to see it, either.