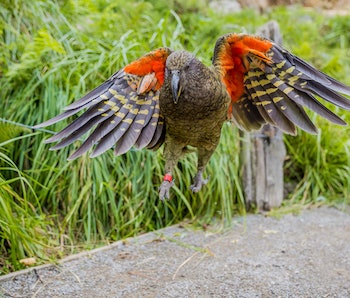 Their brains may be tiny, but parrots can add a new cognitive feat to their list of incredible intelligent abilities — one that allows them to claim greater smarts than some humans.

In a new study, researchers show that kea, an unusual parrot species native to New Zealand, are shockingly good at predicting future outcomes of an event — a skill previously studied only in great apes and humans. In other words, parrots may be able to understand probability.

In a video accompanying the study, the researchers reveal that these parrots appear to outperform monkeys — and perhaps even human infants — on certain probability tasks.

“Kea look very intelligent, and they behave very intelligently,” Amalia Bastos, lead author and a graduate student at the University of Auckland, says in a video demonstrating the experiment. “I just didn’t expect them to perform quite as well as chimpanzees do.”

The researchers tested six male kea, named Blofeld, Bruce, Loki, Neo, Plankton, and Taz. All except Bruce, a wild bird, were bred in captivity. And all were between four and six years old — rather young for a kea, which can live to be 50 years old.

Bastos says she and Alexander Taylor, associate professor and study co-author, wanted to know if the kea could understand an event even with incomplete information.

“Could they fill in the gaps?” Bastos asks.

The research was published Tuesday in the journal Nature Communications.

Here’s how the experiment works: Using wooden pegs, the researchers taught the kea that black pegs can be exchanged for food. Then, the researchers filled two jars with different color pegs, took a handful from each jar, and had the kea pick a hand without showing them what was inside.

One of the jars has a higher concentration of the valuable black pegs, so pulling one up out of this jar was more likely. The hand that picks from this jar is the smart choice — and the kea knew it. The kea almost always chose the jar with the higher concentration of black pegs, providing the first scientific evidence that birds can predict the future based on probabilities.

In a second experiment, the researchers added a horizontal barrier in the jars. But they failed to throw off the kea: the birds ignored the barrier and made their decision based on the top portion of each jar that they could see.

And in a third scenario involving two researchers, the scientists teach the kea that one of the pickers is more likely to pull out black pegs. But once again, the kea got the ruse. The birds selected that researcher’s choice over the other's — even when the concentration of black pegs was the same in each jar.

The findings, the researchers say, provide new insights on animal intelligence. There is a difference between learning an isolated skill or task, called domain-specific intelligence, and learning a broad skill and then applying it to different situations, or domain-general intelligence.

Humans are blessed with the latter, which is why we believe we are so smart — but it looks like kea are right up there with us.

“Reasoning under uncertainty is a central part of human decision-making,” the researchers write in the study. In the experiment, kea “show true statistical inference” and “mirrored the performance of infants and chimpanzees.”

The results also suggest that kea can learn and understand social cues from other animals (in this case, us), using these coded signals to make decisions that benefit them — another skill once thought the preserve of humans and our closest animal relatives.

“We were very surprised that kea can use social cues, even from humans, to make these judgments,” Bastos says in the video.

The findings pave the way for further research about how smart bird brains really are, she says.

“I can’t wait to see what kea do next,” Bastos says. “They keep surprising us.”

Abstract: One key aspect of domain-general thought is the ability to integrate information across different cognitive domains. Here, we tested whether kea (Nestor notabilis) can use relative quantities when predicting sampling outcomes, and then integrate both physical information about the presence of a barrier, and social information about the biased sampling of an experimenter, into their predictions. Our results show that kea exhibit three signatures of statistical inference, and therefore can integrate knowledge across different cognitive domains to flexibly adjust their predictions of sampling events. This result provides evidence that true statistical inference is found outside of the great apes, and that aspects of domain general thinking can convergently evolve in brains with a highly different structure from primates. This has important implications not only for our understanding of how intelligence evolves, but also for research focused on how to create artificial domain-general thought processes.