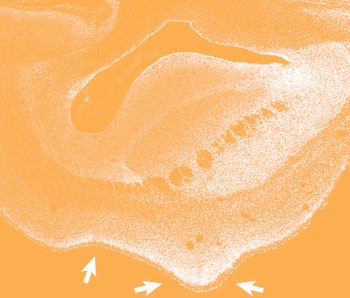 Our big brains set us apart from other primates. Why we have these impressive crania may come down to a specific gene, according to new research. For the first time, that gene has shown the same brain-enlarging effect in a non-human primate.

Researchers in Germany and Japan introduced a human-specific gene to the fetuses of common marmosets, Callithrix jacchus. In turn, that gene, displayed at typical human levels, caused the monkeys' brains to grow larger than usual. This extraordinary finding was published Thursday in the journal Science.

"We had certain hopes — what the gene, ideally, could do and should, if it had the function that we had postulated it should have," lead study author Wieland B. Huttner tells Inverse. Huttner is the director of the Max Planck Institute of Molecular Cell Biology and Genetics.

"The very satisfying answer is that the gene did exactly everything that you could have hoped for."

Huttner breaks the results down into four parts. Inserting the gene:

Essentially, the gene did everything in the marmoset fetus that you might expect an evolutionarily important gene to do: It's as if the researchers re-created the same evolution that happened in the brains of ancient Homo sapiens. That genetic evolution, researchers believe, is part of the basis for the brains we have today.

Turning to primates — In past experiments, researchers have examined the same human gene's effect on the brain sizes of mice and ferrets. The brains did grow larger — but in those experiments, the team used an over-expression of the gene, rather than the typical human levels. So the effect could have been due to another hidden factor rather than the gene itself.

Plus, crucially, mice and ferrets aren't primates — so they can't tell us how the introduction of the gene may have changed the brains of our modern ancestors.

"The idea for this study was to achieve gene expression that is comparable to the expression that you have in the human brain," study co-author Michael Heide tells Inverse. Heide, who works in Huttner's lab, traveled to Japan to do the experiments in monkeys.

Primates are particularly interesting to researchers because — before now, they didn't know if the genes in humans would trigger the same response in our relatives. The scientists say that this is the first evidence of any human-specific gene, put into a non-human primate, that makes the brain physiologically bigger.

"This shows, basically, that the gene — and its expression in humans — is sufficient to expand and to fold the primate, or the monkey, brain," Heide says.

Ethical considerations — Designing any study with primates raises ethical concerns, and introducing a human gene is all the more reason to be careful when conducting research.

Huttner, Heide, and colleagues collaborated with longtime colleagues at the Central Institute for Experimental Animals and Keio University in Japan. After traveling to Japan to set up the experiment, the monkey fetuses grew in place. When they were ready, the fetus samples were shipped to Germany — with great care and lots of paperwork — for their analysis.

When it comes to working across institutions and international borders, it's crucial that researchers are able to work with colleagues that can agree to the same ethical framework, Huttner says.

That's important because the researchers need to agree on the ethical boundaries of their experiment before they set out.

In this case, those boundaries included stopping these experiments in the fetal phase: The fetuses were taken out by C-section after growing for about 100 days. Bringing new human-gene-influenced monkeys into the world would step over the ethical line, Huttner says.

The researchers assumed that there would be a change to the fetuses, based on past examples — but they didn't know exactly what would happen, either.

"To let them come to be born, in my opinion, would have been irresponsible as a first step," Huttner says, "because you don't know what kind of behavioral change you'll get."

Abstract: The neocortex has expanded during mammalian evolution. Overexpression studies in developing mouse and ferret neocortex have implicated the human-specific gene ARHGAP11B in neocortical expansion, but the relevance for primate evolution has been unclear. Here, we provide functional evidence that ARHGAP11B causes expansion of the primate neocortex. ARHGAP11B expressed in fetal neocortex of the common marmoset under control of the gene's own, human, prometer increased numbers of basal radial glia progenitors in the marmoset outer subventricular zone, increased numbers of upper-layer neurons, enlarged the neocortex, and induced its folding. Thus, the human-specific ARHGAP11B drives changes in development in the non-human primate marmoset that reflect the changes in evolution that characterize human neocortical development.