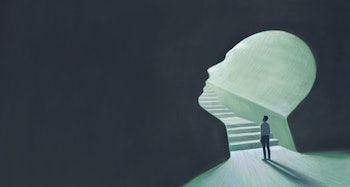 A roaring sound fills the air and a small object zips through the sky. People in a crowd look up, and three voices shout, “Look! Up in the sky! It’s a bird!” “It’s a plane!” “It’s Superman!”

It’s the same object, the same sky. It’s even the same roar. So why do three people witnessing the same event reach different conclusions?

The answer to this question lies in how our brains are hardwired to think. We experience and interpret the world around us based on what we already know, even though sometimes what we know is flawed.

The world is a confusing and busy place. Our brains must make sense of it by processing a never-ending stream of information. Ideally – because it would be most accurate – our brains would analyze everything thoroughly. However, they cannot, because it is too impractical.

Thinking takes time, and our decisions must often be fast. You must immediately know to cross a road quickly – even run – when you hear a car rapidly approaching.

Thinking also uses energy – or brainpower – and our brains have only a limited supply. Analyzing everything would quickly deplete our energy stores.

These limitations represent a thinking problem: Our brains simply do not have enough resources to understand the world without taking some mental shortcuts.

Our brains find shortcuts to overcome the thinking problem by relying on thoughts already stored in our minds, called schemas. Schemas do the processing for the brain, like auto-fill, but for thinking.

Using schemas is more efficient than analyzing every aspect of every moment. They allow our brains to process more information with less effort, saving brain power for other important thinking and problem-solving.

Our brains as libraries

Schemas are like books in your mind telling you what different objects are and what they do. A bird schema, for example, might say that birds are “small animals,” “have wings” and “can fly.” Together, all the objects you know form a collection of books that fill the shelves of a library in your mind.

Our brains trust what these books or schemas tell us when we try to understand objects in our environment. Doing so is much quicker and easier than analyzing their features anew, and the conclusion is usually – but not always – the same.

Do I see things differently than you do?

Whether our judgments are accurate depends on the schemas or books available in our mental libraries.

When our brains try to understand unfamiliar objects, they must rely on a schema for a different but similar object because the correct schema is unavailable. If the object and chosen schema closely match, our brains effortlessly – but inaccurately – assume the two objects are the same.

A person who has never seen a bat might assume a bat is a bird because the features of the bat and their schema for a bird are similar: Both are small animals with wings and can fly. Our brains accept occasional inaccuracies.

For the two people who thought Superman was a bird or a plane, neither had seen Superman before, so neither had a Superman schema available to rely on. Their brains effortlessly chose schemas for a bird and plane instead because those schemas were the closest match to the object in the sky.

Their brains made quick assumptions based on imperfect knowledge. The human brain “thought” it saw one thing but, in the interest of thinking quickly and efficiently, it made a mistake. There is no harm in thinking Superman is a bird or a plane, even though he is not. It only takes one encounter with Superman to create a new schema and change your thinking forever.

This article was originally published on The Conversation by Tyler Daniel Anderson-Sieg at the University of South Carolina. Read the original article here.