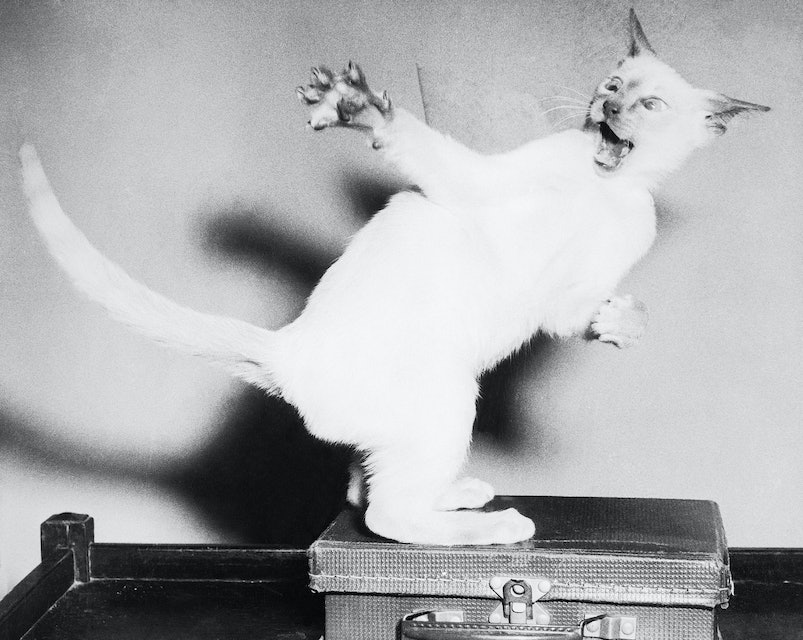 How would you navigate a floor covered in a maze of cups? If you were a cat, the answer might be unpredictable — evidenced by a new viral video and feline behavioral science.

The video in question is a TikTok made by Danil Chernyy exhibiting three different cats maneuvering their way around a floor neatly stacked with transparent, blue, and red plastic cups. As of Thursday, 9.3 million people on TikTok had “liked” it — showing how an unexpectedly hilarious ending, and strange cat behavior, confuses and fascinates us in equal measure.

Some background — Two of the cats, simply introduced as Cat 1 and Cat 2, swiftly and delicately navigated the obstacle. Cat 2 knocked over only a few cups, and Cat 1 managed to dodge all of them.

Cat 3, however, took stock of the situation and came up with a very different solution: blitz right through the obstacle and scatter the cups in every direction.

Why the difference? Cat experts Inverse spoke with say the answer may come down to two contrasting explanations: skittishness or over-familiarity.

A TikTok by user Danil Chernyy, demonstrating the very different cat reactions to an obstacle.

How agile are cats?

Irina Beloozerova, a research scientist at Georgia Tech, tells Inverse this ability gives cats an upper hand when it comes to navigating environments that require nimble balance and flexibility. Beloozerova authored a 2017 study on cat strategies for navigating complex environments published in the Journal of Neurophysiology.

“Regarding biology and evolution, the only thing that I can say is that this kind of a challenge is very natural for cats, as it is for most terrestrial animals,” Beloozerova says.

In other words, cats’ natural agility is well-suited for this sort of delicate navigational exercise.

“They certainly mastered their ability to step accurately through various obstacles in evolution as well as during individual's life,” she says.

How fast are cats?

House cats run at speeds of up to 30 miles per hour, which is approximately the same speed as Jamaican sprinter Usain Bolt.

So, it’s safe to say that, that slow speed is not a factor in the challenge. But it’s also not necessarily helpful when navigating a maze — as we see from the speedy, rushed behavior of Cat 3.

How do cats avoid obstacles?

“Cats have several ways to detect obstacles in their environment, including vision and tactile — they have whiskers not just on their faces, but also on the backs of their paws — that can help them navigate,” Delgado explains.

Meanwhile, Beloozerova’s research suggests cats prefer to circumvent, or walk around, obstacles in their path. They also generally prefer to change their muscle movements as opposed to their speed of movement when it comes to avoiding obstacles.

If that is not an option, then the cats will step over the obstacle, as we see with Cat 1 and Cat 2 in the video (though Beloozerova cautions that her findings may not apply to the video’s obstacles — disposable cups).

However, it’s hard to fully explain Cat 3’s behavior without knowing the context behind the video, Beloozerova explains. Why are the cups these colors? Have these cats seen the cups before?

Beloozerova suspects the cats may have had prior exposure to the cups, which could explain their varying behavior to the obstacle — including Cat 3’s surprising reaction.

“I can guess that this cat is very familiar with the cap challenge,” Beloozerova says. “It knows for sure that it is ok, and even fun, to jump through rather than try to avoid the caps.”

She also hypothesizes Cat 3 had different experiences with the cups compared to Cat 1 and 2, which explains its seemingly erratic behavior.

However, there are still few takeaways from the video about the strategies cats use to navigate obstacles — especially when it comes to using prior learning cues about the environment to avoid obstacles.

“Certainly, the video tells us that there are different ways by which cats can get through obstacles,” Beloozerova. “In addition to looking, I am sure that they use their prior experience about anything similar to what they see at any given moment.”

Why is my cat so skittish?

However, Delgado has a different take on Cat 3’s skittish behavior. She reasons it may have to do more with an emotionally turbulent state of mind rather than a failed obstacle avoidance strategy.

“I wouldn't really frame this around a cat's ability to navigate around obstacles,” Delgado says. “In the case of Cat 3, [it’s more to do with] their ability to cope with an unexpected change in their environment.”

Unlike Beloozerova, Delgado suspects Cat 3 is not familiar with the cup challenge. She hypothesizes the sudden change in the cat’s environment may have frightened it.

“The cat is likely used to passing through this area without anything in his or her way, and became frightened or panicked when things were different,” Delgado says.

Some cats are better able to cope with unexpected situations, stress, and change than others, she explains. This may have to do with genetics, maternal influence, and socialization.

Delgado believes Cat 1 and Cat 2 were probably able to do just fine because they were already accustomed to the environment, and so weren’t as stressed or perplexed by the unusual obstacles.

Do cats always land on their feet?

Cats are known to fearlessly leap around — especially to and from great heights. Cats can reportedly jump to spots that are up to six times their own height.

If your own cat can’t jump that height, don’t fret. According to a 2002 study in the Journal of Experimental Biology, both body fat and the length of a cat’s hind legs can significantly affect “takeoff” speed when jumping. Chubby kitties and cats with shorter hind limbs may have a harder time.

But even when their jump is a little shaky, most cats still manage to land on all four feet, according to a National Geographic video that uses high-speed photography to explain the phenomenon.

First, the cat receives messages from the inner ear and eyes, enabling the cat to appropriately orient its head. Second, the cat twists its spine and aligns its rear legs. Finally, the cat arches its back to soften the impact of landing.

We can take away one important lesson from Cat 3: It’s okay if you get off to a rocky start — so long as you land on your feet.

Are cats more agile than dogs?

A video demonstrating how cats stack up against dogs in a cup obstacle challenge.

Cats’ agility is so well known that there are entire tournaments dedicated to exploring their nimbleness and navigating obstacles. There are dog agility tournaments too, but it’s difficult to contrast and compare — little research has been conducted on the subject. A 2012 study exploring dog-related sports injuries did find that dog agility poses considerably bodily risks for dogs.

What we do have is a 2020 video posted by YouTube user Goldenland, which informally pitted cats against dogs in a similar obstacle challenge involving plastic cups. The dog competitors were, let’s say, not the cat’s meow.