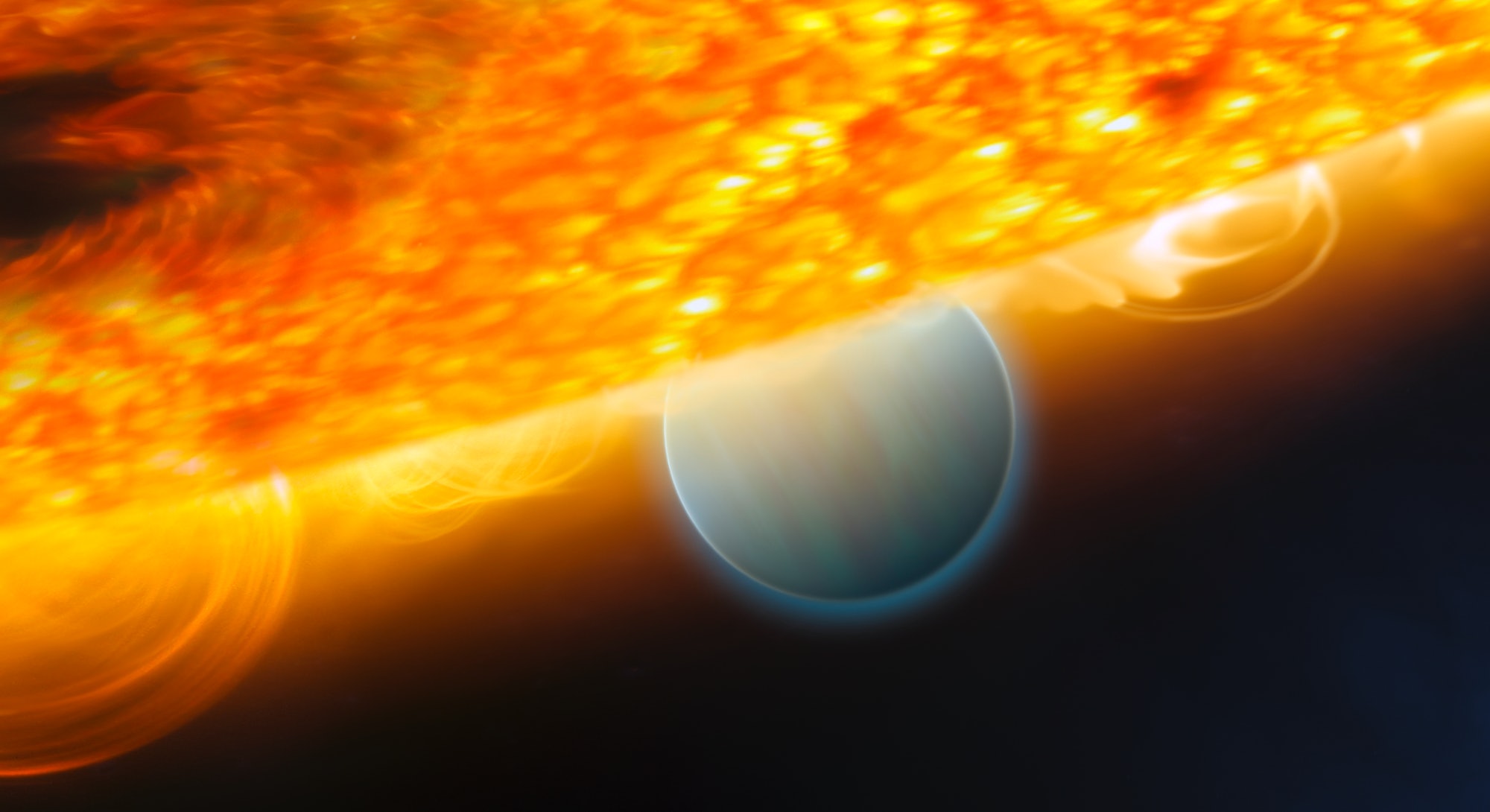 At first glance in the NASA exoplanet archive, it might appear that two planets at PSR 1257+12 were the first confirmed exoplanets. But both orbited the same pulsar, which are the dense remains of a star that went supernova. Those planets were followed in 1995 by 51 Pegasi b, an exoplanet about half the size of Jupiter that was so close to its sun-like star that its orbit was a mere 4.2 days — the first found around a Sun-like Star. The scientists who identified 51 Pegasi b were awarded the Nobel Prize in Physics for this discovery.

However, there’s one exoplanet whose discovery predates 51 Pegasi b by seven years — but a winding series of circumstances meant the planet never got to be considered the first. It would take until 20 years ago today for astronomers to finally believe it was real.

Gamma Cephei A b: The first exoplanet?

Gamma Cephei A b was first identified by astronomers Gordon Walker of the University of British Columbia and Stephenson Yang and Bruce Campbell of the University of Victoria in a paper published in The Astrophysical Journal in 1988. The trio took a look at 12 nearby stars using a technique called the radial velocity method that they had improved themselves to remove systematic errors.

Fundamentally, the radial velocity technique takes advantage of the Doppler effect, where if a star is moving towards the observer it will have a blueshift and the observable wavelengths emitted by the body will be shorter, whereas if it moves away it will experience a redshift where it emits longer wavelengths. If a planet is orbiting a star, the two bodies both are moving around a center of mass called a barycenter, so the planet actually makes the star move a little bit, which produces a Doppler effect. Then, using Kepler’s law, the velocity variations can be fit to determine the mass and orbital parameters of the planet.

At the time, Walker explains, there were many scientists (in particular, astronomers measuring the apparent motion of stars in the sky) looking for exoplanets with no success, or spurious detections, so the subject was already met with a lot of skepticism. At the time, theoreticians widely thought that the star system configuration necessary for an exoplanet would need to be similar to our own Solar System, so a planet large enough to spot, like Jupiter, would have an orbit of 10 - 12 years. This meant scientists searching for exoplanets largely scheduled their times at observatories around this assumption.

Walker, Campbell, and Yang took turns observing a few nights spread out over a year at the Hawaii Canada France telescope on Mauna Kea in Hawaii. Despite the laborious and ineffective scheduling, they began to make progress.

“There was an American Astronomical Society meeting in Vancouver and the press kind of got hold of our work. Bruce was probably over encouraged to suggest that we looked like we were getting somewhere, that maybe we were beginning to see traces of planets and so forth,” Walker tells Inverse. “It was unwise because the press loved it; but of course, astronomers hated it, because they don't like that kind of thing. So, it just added to the level of skepticism.”

Skepticism was high due to a series of high-profile retractions of previous exoplanet candidates, including at nearby Barnard’s Star.

“But then Bruce (Campbell) did find the candidate for us. The velocity of this star we could see was changing very markedly, obviously, due to a faint stellar companion that had to be something as massive as the star,” Walker adds. “And that's not unusual, because you'd get very red, barely visible objects. But superimposed on that was a small wiggle. He correctly thought that maybe it's an extrasolar planet.”

Walker and Campbell included that finding in their first paper, which summarized all of their observations up to that time. During that period, the discovery of the first exoplanet “was an extraordinary claim, and extraordinary claims require extraordinary evidence” as Carl Sagan once said, paraphrasing LaPlace’s principle that “the more extraordinary a fact is, the more it needs to be supported by strong evidence.”

The downfall of Gamma Cephei

If Walker and Campbell correctly identified the first exoplanet, what went wrong? William Cochran, a research professor of astronomy at University of Texas and the McDonnell Observatory, who was also involved in the confirmation of the Gamma Cephei planet in 2002, recalled that given the climate of the field at the time, the pressure to consider alternative explanations for that little wobble was huge.

Following their paper, Walker went on sabbatical and Campbell had a temporary position at University of Victoria. Walker said they were communicating over email and trying to discern if their observation was, in fact, an exoplanet or a process inherent in the primary star itself.

In 1992, the original paper was withdrawn, and it was indeed suggested that while an exoplanet in the binary Gamma Cephei system was a possible culprit, the observations were more likely a product of the star’s rotational period.

Artie Hatzes, a professor at the Friedrich Schiller University of Jena and director of the Thuringian State Observatory in Germany who has observed Gamma Cephei A, tells Inverse, “After they discovered it, in 1992, Walker published a paper where they looked at some of these activity indicators; it just measures if there spots on the surface of the star. And he convinced himself that he wasn't seeing a planet, but just the rotation of the star.”

This ordeal likely played a role in Campbell’s subsequent departure from academia and astronomy. He now works as a tax consultant.

Hatzes put this decision into perspective. As is the case in our Solar System, the Sun has a solar cycle, or sunspot cycle, that lasts approximately 11 years, which is similar to the orbit of Jupiter. This sunspot cycle is how the rotation of the Sun can be measured. For a hypothetical astronomer in another solar system trying to distinguish the sun’s rotation from Jupiter’s orbit, this would prove difficult, but not impossible. If the measurements were nearly identical every orbital period, it would suggest that there is a planet, whereas if the signal fluctuates more, it is more likely there is a solar process happening.

Gamma Cephei seemed not to have a planet after all, and 51 Pegasi b became the first confirmed planet around a Sun-like star — but Gamma Cephei’s story wasn’t over.

The return of Gamma Cephei

In 2003, a group of astronomers took a fresh look at Gamma Cephei. Between 1992 and 2003, around 87 exoplanets had been identified. Almost all of them had periods far below that of Jupiter.

Hatzes recalls a conversation with Walker. A colleague at Walker’s observatory looked at the noisy data from the activity indicators and saw that they had the same period as the planet.

“But then he said,” recalled Hatzes, “and this was what stuck in my mind, something like, ‘you know, the real reason was, I asked every theorist, and they all told me, it was impossible to have a Jupiter-sized planet in a two-and-a-half year orbit, which is what this planet was, it's impossible to form these.’ And he said, ‘I was looking for a way out and the rotation seemed to be the way out.’”

Hatzes, University of Texas astronomer William Cochran, and colleagues took a fresh look at the star system once the ability to differentiate between an exoplanet and a star’s rotation or evolutionary process came into its own.

“As we continued to follow this star from McDonald Observatory, I told Bill [William Cochran], you know, we're still seeing this signal after 20 years,” Hatzes says. “It's hard to imagine, it could be spots, because spots come and go. They're not fixed. You know, you look at the Sun, sometimes they're there, and sometimes they're not. I did a more careful analysis of these what are called activity indicators and I concluded it wasn't due to rotation.”

“In retrospect, it turns out that (Walker, Campbell, and Yang) were right, that it was indeed a planet orbiting the star,” Cochran tells Inverse. “And so, you know, I always give them credit for finding the first exoplanet.”

Walker was listed as a co-author on the paper with Hatzes, Cochran, and other astronomers that confirmed that Gamma Cephei did have a planetary companion, confirmed 20 years ago today, presented at the Divsion for Planetary Sciences of the American Astronomical Society conference in October 2002, and fully published in 2003.

Repeating a sentiment that Walker sensed before the original detection of Gamma Cephei A b, Hatzes recalled a story that reflected the strong paradigm in the astronomy community that may have suppressed the Gamma Cephei A b from ever earning it’s title as the first discovered exoplanet. Hatzes recalled that he had recently moved to Germany and Walker was visiting him. As he was showing the observatory to Walker, Hatzes lamented that Walker had found it — the first exoplanet; if Walker had done the analysis they did in the later paper, they would have found it wasn’t the star’s rotation.

The hive mentality over the so-called correct configuration for an exoplanet seems to have had a resounding effect on Walker.

“That's the whole point about science: it's about doubt, not about certainty,” Walker says after sharing his belief that young children have a much easier time to understand and accept these things; something he really picked up on after teaching classes to them during the pandemic when there was no school.

New technology, like that used on NASA’s now-departed Kepler space telescope (of which Cochran was a co-investigator) and currently-operational Transiting Exoplanet Survey Satellite (TESS), can detect thousands of additional exoplanets by measuring changes in a star’s brightness as an exoplanet transits in front of the star as it passes through the telescope’s line of sight.

While in the 1990s the identification of exoplanets were much rarer than they are today, Gamma Cephei A b and 51 Pegasi b illustrated that exoplanets can exist in previously unthinkable configurations — periods of just a few days, multi-star systems, even stars so small they’re at the borderline of brown dwarfs. Exoplanets, emphasized Hatzes, Cochran, and Walker, will form anywhere they can.

Cochran said of Gamma Cephei A b, “I think that it's an example that planets can really occur just about everywhere. Don't expect all the planets to look like our solar system. Nature is far more imaginative than we are. I guess there's a line from Alice in Wonderland or something that anything that is not forbidden is mandatory, unless you can think of an excellent reason why it can't exist. That with 200 billion stars in this galaxy, it exists somewhere.”