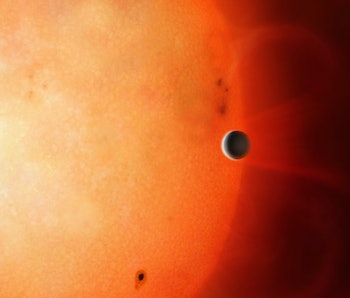 Since 2018, NASA's Transiting Exoplanet Survey Satellite (TESS) has scoured the skies to search for strange alien worlds spread out in different parts of the universe. But, until now, it's never seen anything like TOI 849 b.

That's because TOI 849 b is not really a planet. Instead, it's likely an exposed core of a planet — a frail skeleton that either lost its atmosphere over time or never fully formed to become a planet in the first place.

The discovery of the exoplanet was detailed in a study published Wednesday in the journal Nature. It offers astronomers a rare glimpse into the insides of other worlds and what planets are made of for the first time.

The exoplanet's core was found orbiting a star located around 730 light-years away, circling within the so-called Neptunian Desert. A Neptunian Desert refers to an area around a star where no Neptune-sized planets are found. Because this region receives strong radiation from the host star, planets are unable to retain their atmosphere over time.

TOI 849 b, however, is "strangely close to its star," lead author David Armstrong, a researcher at the University of Warwick, says. While it takes Earth a full year to orbit around its star, it takes TOI 849 b just 18 hours to complete a full orbit.

The planet core itself is thought to have a mass that is two to three times higher than Neptune and is incredibly dense with all of its material stuffed into an object of the same size. TOI 849b is about 40 times heavier than Earth, but its radius is just 3.4 Earth radii.

“TOI 849 b is the most massive terrestrial planet — that has an Earth-like density — discovered," Armstrong says.

Due to its mass, Armstrong and his colleagues expected to measure large quantities of hydrogen and helium, which the planet would have accreted when it formed and grew into a planet that was once similar to Jupiter. However, there were no traces of those gases. This indicated that this was an exposed planetary core.

“This is the first time that we’ve discovered an intact exposed core of a gas giant around a star,” Armstrong says.

The researchers believe its fate was determined by one of two scenarios.

The first is that the exoplanet was a gas giant similar to Jupiter, but lost its outer gas over time through either tidal disruption. This is when a planet is ripped apart from orbiting too close to its host star, or through colliding with another planet.

The second possible scenario is that TOI 849 b is a failed gas giant, meaning that it never formed an atmosphere at all. This may be due to something failing with the surrounding disc of material that planets draw from when they are forming, either there was a gap in the disc or the disc ran out of material.

“One way or another, TOI 849 b either used to be a gas giant or is a ‘failed’ gas giant," Armstrong explains. “It’s a first, telling us that planets like this exist and can be found. We have the opportunity to look at the core of a planet in a way that we can’t do in our own solar system."

The research team hopes that studying the core of the exoplanet will offer new information on the interior of planets and their composition.

"Because TOI 849 b is so close to the star, any remaining atmosphere around the planet has to be constantly replenished from the core," Armstrong says. "So if we can measure that atmosphere then we can get an insight into the composition of the core itself.”

Abstract: The interiors of giant planets remain poorly understood. Even for the planets in the Solar System, difficulties in observation lead to large uncertainties in the properties of planetary cores. Exoplanets that have undergone rare evolutionary processes provide a route to understanding planetary interiors. Planets found in and near the typically barren hot-Neptune ‘desert’1,2 (a region in mass-radius space that contains few planets) have proved to be particularly valuable in this regard. These planets include HD149026b3 , which is thought to have an unusually massive core, and recent discoveries such as LTT9779b4 and NGTS-4b5 , on which photoevaporation has removed a substantial part of their outer atmospheres. Here we report observations of the planet TOI-849b, which has a radius smaller than Neptune’s but an anomalously large mass of 39.1 −2.6 +2.7 Earth masses and a density of 5.2 −0.8 +0.7 grams per cubic centimeter, similar to Earth’s. Interior-structure models suggest that any gaseous envelope of pure hydrogen and helium consists of no more than 3.9−0.9 +0.8 percent of the total planetary mass. The planet could have been a gas giant before undergoing extreme mass loss via thermal self-disruption or giant planet collisions, or it could have avoided substantial gas accretion, perhaps through gap opening or late formation6. Although photoevaporation rates cannot account for the mass loss required to reduce a Jupiter-like gas giant, they can remove a small (a few Earth masses) hydrogen and helium envelope on timescales of several billion years, implying that any remaining atmosphere on TOI-849b is likely to be enriched by water or other volatiles from the planetary interior. We conclude that TOI-849b is the remnant core of a giant planet.