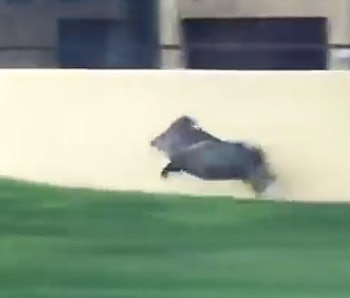 This week, a viral video of a javelina at full sprint, bounding down a boulevard in Tuscon, Arizona wooed Twitter. It was a matter of time before someone did the decent thing and set it to music, and the footage is just as captivating paired with Led Zeppelin as it is The Beach Boys.

In a new study, evolutionary researchers explain the science behind why wild boars like the javelina are so darn speedy compared to their domesticated cousins.

In the new study, archaeologists discover that, during domestication, wild boars' muscles and bones evolved to develop differently to suit a life in captivity. The captive boars appear to be more muscular, while their wild peers are faster on their feet.

The research sheds light on how humans can influence animal evolution to the extent that it changes their very bones.

“This study tells us that when you remove a wild animal from its natural habitat to grow into an environment where he can't fully express its locomotor behavior, its skeleton will change,” study lead author Thomas Cucchi, a researcher at the French National Centre for Scientific Research, tells Inverse.

Naturally, this calls to mind the javelina video. In case you haven't seen the original:

This great runner galloping effortlessly down the street is mesmerizing. In fact, the cadence of the pig's leaps and bounds are so even that the clip works with any song.

This now-famous ability to run, though, is lost on wild boars — cousin to javelinas — when they are raised in captivity.

Cucchi had not seen the video before Inverse turned him on to it and its subject's grace, but he is now a fan.

“It shows how these animals are super athletes that can run fast and for a very long time,” Cucchi says. “Pigs selected for their big muscles would not stand a chance in a race with their wild relatives.”

By studying wild boars and boars raised in captivity, Cucchi’s team found that captive boars have a differently shaped calcaneus to their wild cousins. The calcaneus is a bone found in the boars' heels.

In the study, researchers compared modern boar bones with bones from the skeletons of pigs living more than a century ago.

Bones are a “plastic tissue,” Cucchi tells Inverse. They change according to the “functional demand” of their environments. Because domesticated boars grow up in a very different environment than their wild counterparts — one that requires less sprinting away from predators, for example — it makes sense that their bones would be different, too.

“The big surprise was that the wild boars that grew in a captive environment show more muscular force than the wild caught wild boars,” Cucchi says.

Instead of taking shape as lean runners, domesticated boars bulk up, putting on heftier muscles.

“The big surprise was that the wild boars that grew in a captive environment show more muscular force than the wild caught wild boars,” Cucchi says.

Instead of taking shape as lean runners, domesticated boars bulk up, putting on heftier muscles.

The findings were published in a study Tuesday in the journal Royal Society Open Science.

The findings are slightly counterintuitive: It is reasonable to think boars would develop better muscles out in the wild, fending for themselves. So why does captivity produce bulkier boars?

Animals’ behavior in captivity may lead them to develop a different type of muscle to their wild peers, specifically muscles that are “stronger and bigger,” Cucchi says.

Diet may play a role here, too: Wild boars in captivity eat feed that cover all of their nutrient needs, while wild boars fending for themselves may have less stable diets.

The study enables archaeologists to determine just how fast these kinds of changes evolve in animals when humans breed them in captivity.

The research could also improve programs to breed animals in captivity before reintroducing them to the wild, the scientists say.

Humans affecting the way animals move is one of the earliest parts of “the long continuum of interaction between humans and animals” that happens during domestication, Cucchi says.

The new research “could provide archaeologists with a new way to explore the early step of animal domestication," he says.

It also gives us a chance to watch this wild video, over and over — for science.

Abstract: Deciphering the plastic (non-heritable) changes induced by human control over wild animals in the archaeological record is challenging. We hypothesized that changes in locomotor behaviour in a wild ungulate due to mobility control could be quantified in the bone anatomy. To test this, we experimented the effect of mobility reduction on the skeleton of wild boar (Sus scrofa), using the calcaneus shape as a possible phenotypic marker. We first assessed differences in shape variation and covariation in captive reared and wild caught wild boars, taking into account differences in sex, body mass, available space for movement, and muscle force. This plastic signal was then contrasted with the phenotypic changes induced by selective breeding in domestic pigs. We found that mobility reduction induces a plastic response beyond the shape variation of wild boars in their natural habitat, associated with a reduction in the range of locomotor behaviors and muscle loads. This plastic signal of captivity in the calcaneus shape differ from the main changes induced by selective breeding for larger muscle and earlier development that impacted the pigs’ calcaneus shape in a much greater extent than the mobility reduction during the domestication process of their wild ancestors.

More like this
Science
7.31.2022 1:00 PM
How do cats co-exist with each other? The answer may lie in their gut
By Tara Yarlagadda
Science
8.10.2022 3:00 PM
Watch sea sponges sneeze out stringy mucus in slow motion
By Jennifer Walter
Science
8.1.2022 10:30 AM
These 6-million-year-old teeth may be from Europe’s last panda species
By Elana Spivack
Related Tags
Share: