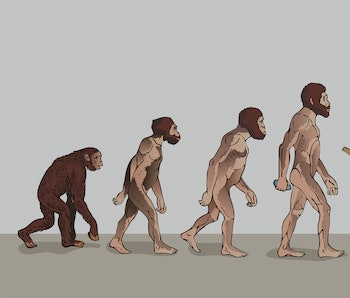 Evolution explains how all living beings, including us, came to be. It would be easy to assume evolution works by continuously adding features to organisms, constantly increasing their complexity. Some fish evolved legs and walked onto the land. Some dinosaurs evolved wings and began to fly. Others evolved wombs and began to give birth to live young.

Yet this is one of the most predominant and frustrating misconceptions about evolution. Many successful branches of the tree of life have stayed simple, such as bacteria, or have reduced their complexity, such as parasites. And they are doing very well.

In a recent study published in Nature Ecology and Evolution, we compared the complete genomes of over 100 organisms (mostly animals), to study how the animal kingdom has evolved at the genetic level. Our results show that the origins of major groups of animals, such as the one comprising humans, are linked not to the addition of new genes but to massive gene losses.

The evolutionary biologist Stephen Jay Gould was one of the strongest opponents of “the march of progress”, the idea that evolution always results in increased complexity. In his book Full House (1996), Gould uses the model of the drunkard walk. A drunkard leaves a bar in a train station and clumsily walks back and forth over the platform, swinging between the bar and the train tracks. Given enough time, the drunkard will fall in the tracks and will get stuck there.

The platform represents a scale of complexity, the pub being the lowest complexity and the tracks the maximum. Life emerged by coming out of the pub, with the minimum complexity possible. Sometimes it randomly stumbles towards the tracks (evolving in a way that increases complexity) and other times towards the pub (reducing complexity).

No option is better than the other. Staying simple or reducing complexity may be better for survival than evolving with increased complexity, depending on the environment.

But in some cases, groups of animals evolve complex features that are intrinsic to the way their bodies work, and can no longer lose those genes to become simpler - they become stuck in the train tracks. (There are no trains to worry about in this metaphor.) For example, multicellular organisms rarely go back to become unicellular.

If we only focus on the organisms trapped in the train tracks, then we have a biased perception of life evolving in a straight line from simple to complex, mistakenly believing that older lifeforms are always simple and newer ones are complex. But the real path to complexity is more tortuous.

Together with Peter Holland from the University of Oxford, we looked into how genetic complexity has evolved in animals. Previously, we have shown that the addition of new genes was key to the early evolution of the animal kingdom. The question then became whether that was the case during the later evolution of animals.

Studying the tree of life

Most animals can be grouped into major evolutionary lineages, branches on the tree of life showing how the animals alive today evolved from a series of shared ancestors. In order to answer our question, we studied every animal lineage for which a genome sequence was publicly available, and many non-animal lineages to compare them against.

One animal lineage is that of the deuterostomes, which includes humans and other vertebrates, as well as sea stars or sea urchins. Another is the ecdysozoans, comprising the arthropods (insects, lobsters, spiders, millipedes), and other molting animals such as roundworms. Vertebrates and insects are considered some of the most complex animals. Finally, we have one lineage, the lophotrochozoans, that includes animals such as mollusks (snails, for example) or annelids (earthworms), among many others.

We took this diverse selection of organisms and looked to see how they were related on the tree of life and what genes they shared and didn’t share. If a gene was present in an older branch of the tree and not in a younger one, we inferred that this gene had been lost. If a gene wasn’t present in older branches but appeared in a younger branch, then we considered it a novel gene that had been gained in the younger branch.

The results showed unprecedented numbers of genes lost and gained, something never seen before in previous analyses. Two of the major lineages, the deuterostomes (including humans) and the ecdysozoans (including insects), showed the largest number of gene losses. In contrast, the lophotrochozoans show a balance between gene novelties and losses.

Our results confirm the picture given by Stephen Jay Gould by showing that, at the gene level, animal life emerged by leaving the pub and making a large leap in complexity. But after the initial enthusiasm, some lineages stumbled closer to the pub by losing genes, while other lineages drifted towards the track by gaining genes. We consider this the perfect summary of evolution, a booze-induced random choice between the bar and the train track. Or, as the internet meme says, “go home evolution, you are drunk."

More like this
Science
Sep. 17, 2022
3 huge reasons why mosquitos want to eat you
By Jonathan Day and The Conversation
Science
Sep. 15, 2022
This tiny reptile roamed with the dinosaurs — and could solve an evolutionary mystery
By Jennifer Walter
Science
Sep. 25, 2022
Whale evolution isn’t completely understood — but genes reveal part of the story
By Amber Dance and Knowable Magazine
Related Tags
Share: