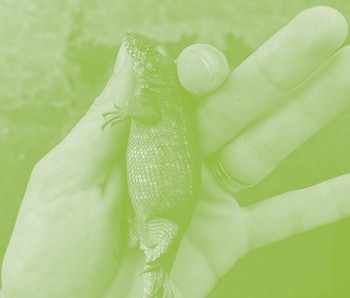 Feasting on greasy pizza comes with its consequences for humans, but for a curly-tailed lizard on the eastern beaches of Florida, the results were especially crappy.

The female curly-tailed lizard in question, technically known as a Leiocephalus carinatus, was living near a beach-side pizza shop. This, unfortunately, meant that she developed the proclivity for chomping down on leftover pizza grease, as well as sand. This diet was supplemented by a more traditional meal for curly-tailed lizards — bugs.

A team of University of Florida herpetologists came across the lizard while tracking down reptile samples in Florida's Cocoa Beach. Their recent analysis of her revealed something strange: Buried inside the lizard was an unusually large fecal bolus, colloquially known as a ball of poop.

By the time the researchers found the lizard, the bolus had grown to account for 80 percent of the lizard's entire body mass. It's the largest bolus, relative to body size, ever discovered in a living animal.

This finding was revealed in a note published this week the journal Herpetological Review.

Natalie Claunch, a Ph.D. candidate, was part of the team that found this lizard. Claunch tells Inverse that before the discovery, she had a hunch they might find something strange in the area: The previous year, her team found a similar lizard with a fecal mass comprising 40 percent of its body. She warned her teammates that "they were probably in for a big surprise."

And big it was.

When the chunky lizard was first caught, it was assumed she was simply ready to lay eggs. But, when felt for eggs, none were there. So they took her in for a CT scan. This revealed that her body was absolutely filled with feces. Her bolus-to-body mass ratio shatters the previous record: a Burmese python with a bolus that took up 13 percent of its body mass.

While shocking, the finding is a tragic one: It doesn't bode well for any animal to break this record. Her situation, the team says, "must have been very uncomfortable."

"We are unaware of any records from wild or captive animals that approach our finding," Claunch says.

"We hope for the sake of the individual animals that there are not any out there!"

Invasive species with a strange appetite — Curly-tailed lizards, which are an invasive species in Florida, are "bold and curious lizards," Claunch says. They burrow in the ground to avoid heat and cold, and curl their tails above their body — possibly using that skill as a signal to other lizards.

In their natural habitats, they "eat just about anything that moves," Claunch explains. That seems to be true in Florida, where the species have established populations throughout the state. Living near humans has seemingly suited the reptiles, who are known to hitch rides on cars and in shipments — sometimes making it as far north as North Carolina or Michigan from Florida, Claunch says.

Sand is likely the part of this lizard's diet that caused the bolus to become so large — and the lizard probably ate the sand because it had something tasty mixed in, like pizza grease, Claunch says. This touches on an on-going issue: The access, and reliance, wild animals have on human food.

Curly-tailed lizards are a "perfect" species to study to better understand what traits make an invasive species successful, Claunch says. But, unfortunately for the lizards, because they aren't native to the area, when they're captured for research they can't be released back into the wild. Like other specimens, the lizard with the giant, un-passable bolus was euthanized in the lab after she was examined.

Dissecting the lizard gave the researchers a look at what the over-stretched gut looked like on the inside.

It's not all that unusual for a curly-tailed lizard to drop a sizable load, the researchers say. Healthy lizards can still have impressively large bowel movements:

In a competitive field of lizards who poo big, it's especially impressive that the lizard from pizza shop was able to top the charts with its massive achievement. As a lizard, if you're going to go down in the scientific record — you might as well smash a record while you're at it.

Note Excerpt: At 1041 h on 21 July 2018, we captured an adult female Leiocephalus carinatus (Florida Museum of Natural History [UF] 185239: 87 mm SVL, 28 g) in Cocoa Beach, Brevard County, Florida, USA (28.32751°N, 80.61065°W; WGS 84) with a visibly distended abdomen, dense upon palpation (Fig. 1). The animal was euthanized. Dissection revealed a giant, putty-like mass similar to that previously described in this species (Claunch and Crowe-Riddell 2018. Herpetol. Rev. 49:118–119). The other internal organs had visibly atrophied, notably the liver and ovaries. The fecal bolus was weighed intact in the GI tract at a mass of 22 g. This fecal bolus weighed approximately 78.5% of the animal’s total body mass (Fig. 1), and to our knowledge, represents the largest feces to body mass ratio recorded in a living animal. In comparison, in Python bivittatus—a species which regularly take large food items—a fecal bolus of 13% body mass was recorded (Boback et al. 2016. Bioinvasions Rec. 5:197–203).