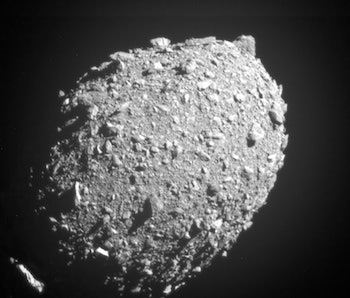 It worked. NASA’s Double Asteroid Redirection Test (DART) successfully moved an asteroid, space agency officials confirmed on Tuesday, October 11. This is the first time humanity has knowingly changed the orbit of another planetary object and the first test of a system designed to protect our planet from a future extinction-causing asteroid impact.

“This is a very exciting and promising result for planetary defense,” Nancy Chabot, the DART coordination lead from the Johns Hopkins Applied Physics Laboratory (APL) in Laurel, Maryland, told reporters at a press conference for Tuesday’s announcement.

Dimorphos is the small moon of a much larger rock, Didymos. Until that high-stakes Monday night, as DART’s camera live-streamed the spacecraft’s perilous final moments careening into Dimorphos’ alien surface, no one knew what either asteroid looked like. These rocks are so far from Earth and so close to one another that astronomers had previously learned about their partnership purely by their single twinkling light.

The same technique — measuring how often the asteroids’ collective point of light dimmed as the smaller asteroid eclipsed the larger one from Earth’s perspective — proved critical to today’s announcement, too. These observations helped confirm that DART shortened Dimorphos’ orbit by 32 minutes — representing a large-scale change in its orbital trajectory and path.

The orbital period change of 32 minutes is within the range of models the team has studied on the ground. The “refrigerator-sized” DART spacecraft, as NASA Chief Bill Nelson described it on Tuesday, nudged Dimorphos ever-so closer to Didymos and shaved down Dimorphos’ orbit of 11 hours and 55 minutes to a new period of 11 hours and 23 minutes.

Why did NASA crash an asteroid?

NASA performed the DART test alongside APL and the Italian Space Agency (ASI) to proactively find a solution to the potential for a future doomsday asteroid to threaten Earth. While no asteroids appear to be on a collision course with Earth, history tells us that these planet-wrecking rocks have emerged from space to annihilate most life on Earth in the past. It could, feasibly, happen again.

But NASA’s test shows that DART is surprisingly effective, though astronomers still need to find out exactly how it achieved its mission goals.

The test observations so far are “definitely indicating that you’re getting an enhanced deflection due to the amount of ejecta, that rocky material, that’s being thrown off in DART’s collision,” Chabot added.

“I think it’s also important to put this into perspective of a kinetic impactor technique if you wanted to use this in the future to potentially deflect an asteroid. This is a four percent change in the orbital period of Dimorphos around Didymos. And it just gave it a small nudge.”

“If you wanted to do this in the future, it could potentially work,” Chabot said, referring to a real mission rather than a test. “But you would want to do it years in advance. Warning time is really key here.”

NASA monitors the space around Earth to track asteroids and other space rocks. These near-Earth objects are cataloged and followed intensely by scientists here on Earth using trackers like NASA’s Center for Near Earth Object Studies. In general, scientists can track most objects that come within hundreds of millions of kilometers of Earth as they travel around the Sun. In the case of the NASA Center, it tracks objects’ trajectories up till the year 2200. But there is always a very small potential that our observatories might spot a new object on a more worrying approach toward Earth in the future.

What’s next — The scientists need to spend time deciphering Dimorphos’ new orbit. Together with observations from the future European Space Agency mission HERA, which will launch toward the asteroid duo in 2024, astronomers will investigate DART’s aftermath.

According to DART program scientist Tom Statler, the researchers want to refine the math of the collision. They seek to understand what direction the material that ejected from Dimorphos went, the mass of the ejecta plume, the shape of its orbit, and if DART induced a wobble to Dimorphos’ orbit. All of this information can help refine our models for future asteroid-moving missions — and perhaps save the Earth from catastrophe.

More like this
Science
November 20, 2022
Scientists are looking into this last-minute strategy to save the planet from asteroid disaster
By Universe Today and Matt Williams
Science
1 hour ago
NASA’s Artemis I mission just beat a 52-year-old spaceflight record
By Doris Elín Urrutia
Science
November 26, 2022
An iconic nearby astronomical object has been stealing stars from other galaxies
By Evan Gough and Universe Today
Related Tags
Share: