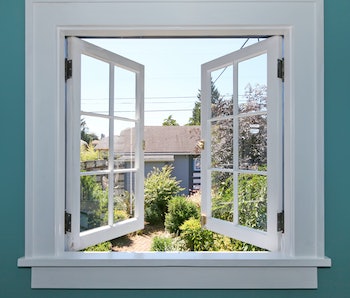 Over 200 scientists, including myself, signed a letter that was published in the journal Clinical Infectious Diseases on July 6 2020 saying that COVID is not only spread by touch and droplets sprayed from the mouth and nose but, importantly, via a third route too.

The third infection pathway is in very tiny airborne particles of liquid and material, known as aerosols, that stay suspended in the air for a long time. If the virus attaches to these tiny particles, it can float on the air and spread much further. An effective way to reduce this spread is to purge the air containing those aerosols from rooms by simply opening the windows, as shown below.

This illustration shows that by opening a window to let the virus escape, the amount of it in a room can be reduced, leading to a lower risk of infection.

Three days after our letter was published in Clinical Infectious Diseases, the World Health Organization admitted that aerosol transmission can’t be ruled out, given the growing evidence of disease spread in poorly ventilated venues such as restaurants, nightclubs and places of worship.

Aerosol spread was shown in late January in Guangzhou, China, where ten people fell ill with the novel coronavirus after eating lunch in a fifth-floor restaurant without windows. The virus had probably been spread in aerosol form by an air conditioner – although the study has yet to be peer-reviewed.

To prevent COVID from spreading:

Very few of the above groups even mention the importance of simply opening windows, or the added benefits of the thermal, emotional and sensual delight of a cooling breeze on the skin on a warm day. Or the relief of clean, fresh air pouring into a stuffy room.

Building designers today often don’t understand that they have been cheated by not being taught how to ventilate buildings naturally. Modern, fast, cheap, design has three key drivers. One, the architectural fantasy that their main professional contribution to society is in sculptural art. Two, what the building regulations require. And three, the limits imposed on designers by the almost universal use of flawed building simulation models that steer designers away from naturally ventilating buildings.

Building regulations are written largely by HVAC engineers, including in the US and the UK. HVAC engineers are typically paid according to the amount of HVAC equipment that goes into a building, which is a conflict of interest issue that needs to be addressed globally.

Given that engineers write the rules, it is hardly surprising that buildings are required to have ever more machinery installed in them to comply with those rules. No wonder architects now earn less than HVAC engineers, bricklayers, plumbers and even scaffolders.

If you are sitting in an overheated, stuffy room, with windows that don’t open, or are finding it difficult to pay for the rising air-conditioning bills, don’t worry. Things are about to change.

The future will have to be about buildings that are naturally ventilated for as much of the year and the day as possible, for many excellent reasons, including energy costs, carbon emissions and the basic health and safety of occupants.

Windows must be a life-saving feature of safer, better buildings in a less predictable future – never more so than during a pandemic when the power grid fails.

This article was originally published on The Conversation by Susan Roaf at Herriot-Watt University. Read the original article here.