"To see a black hole, we would need a telescope the size of the entire Earth." 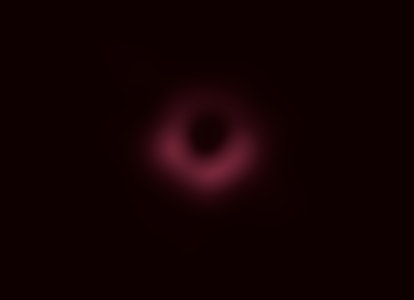 Supermassive black holes lurk at the center of myriad galaxies like spiders at the center of their web. Yet these cosmic behemoths are invisible to our Earthly instruments — we "see" them only via the effect they have on their surroundings.

But in 2019, a group of more than 200 astronomers from all over the world managed the inconceivable: They captured the first image of a black hole, rendering the invisible visible.

Katie Bouman, a computer science professor at Caltech was one of those astronomers. Before she came on the team, she admits she didn't believe it was possible to capture an image of a black hole.

"Ideally, to see a black hole, we would need a telescope the size of the entire Earth," Bouman tells Inverse. "We had to come up with a computational telescope that size."

And so, in a testament to human ingenuity and cooperation, they did.

Specifically, they built a telescope network on a staggering (one could even say 'cosmic,') scale, a feat detailed in a new documentary streaming now on Apple TV titled Black Hole: The Edge of All We Know. The film grants the viewer unprecedented insight into how science can triumph over disbelief, and bring us one step closer to understanding the inner workings of the universe.

April 10, 2019: This was the day scientists unveiled the first image of a black hole ever taken. The black hole they captured on camera is not the Milky Way's own black hole, Sagittarius A*, but the one at the center of the galaxy Messier 87, known as M87.

The image revealed the silhouette of the black hole surrounded by a glowing halo of fiery gas. Nicknamed a “ring of fire,” the hot gas formed a circular shape around the black hole's event horizon. True to their nature, the black hole itself is a central dark point from which no light escapes.

The documentary, which premiered March 2, began filming in April 2016. The filmmakers, led by director Peter Galison, focused on the team of scientists who together ran a global network of telescopes known as the Event Horizon Telescope. This array is composed of eight telescopes located on five continents. And together, they were all aimed at the black hole at the center of the galaxy Messier 87, which is located 55 million light-years away from Earth.

The team essentially synchronized the telescopes together to gather the data needed to compose the image. The data-processing computers acted like a “lens” for the virtual telescope, Bouman explains, helping form the image from bits, pieces, and glimpses taken across the network.

Bouman, for her part, helped to develop the computer code which spotted telltale signs of the black hole among the outpouring of data collected. She joined the project in 2013.

Over seven days in April 2017, the all eight telescopes turned as one toward M87. Synchronized by custom-made atomic clocks, they collected incoming radio signals from the distant black hole and logging the data on super-fast data recorders built for this one task.

In all, the telescoped gathered 5 petabytes, or 5,000 terabytes, of data, with around 350 terabytes collected every day of the observation period.

The astronomers then broke off into four separate teams to work in isolation for 7 weeks. The idea was for each team to use the data to create their own image of the black hole. A large portion of the documentary follows the process by which each team worked on developing their own image, and then, how the final, single image came together.

"The absence is what you detect rather than the presence."

Incredibly, the four final images only showed slight differences on a pixel-by-pixel basis, but the overall structure of the black hole as imaged by all four teams matched up. They had done it.

Here's the background — Black holes were first predicted to exist by scientist Karl Schwarzschild in 1916. At the time, he was looking for solutions to Einstein’s theory of general relativity. Since then, scientists have come to understand black holes as a region of space with such a strong gravitational tug that nothing, not even light, can escape from them.

Astronomers have long inferred the existence of black holes by measuring their effects on their surroundings, but had never been able to capture an image of the region around the “event horizon.” This horizon is considered a kind of point of no return for matter from the clutches of a black hole.

"By definition, they are sort of nothingness," Priyamvada Natarajan, astronomy professor at Yale University, tells Inverse. Natarajan was not involved in the EHT.

"It's like the absence is what you detect rather than the presence, and the best that you can do is to see the indirect effect of the strong gravity that they exert right around the vicinity."

"You don't actually expect to really come this up close and personal to a black hole," she says.

Capturing this emotional component in the science Natarajan hints at is one of the triumphs of this documentary. Black holes are among the most massive and powerful objects in the universe, but they are also central to our understanding of the physical laws which govern the cosmos, and, by extension, ourselves.

"Seeing the image was really quite remarkable," Natarajan says.

"I have been personally quite fascinated with rendering the invisible visible."

Drawing back the veil — Before she joined this project, Bouman had not studied black holes, per se. She was drawn in for the computational imaging challenge the quest to picture a black hole presented.

"Everything I've learned about black holes has come from my experiences working with my great team of collaborators on the project," Bouman says.

Bouman is a computer scientist by trade. She previously worked on creating computer images from large sets of data. She joined the black hole project as a 23-year-old junior researcher, and was tasked with designing an algorithm to interpret the telescopes' data and condense it into a single picture.

The first image of the black hole reaffirmed scientists' theories about these cosmic objects, from their sheer size to the ring of light that surrounds them.

"The image ratifies our conceptual models," Natarajan says. "We have very strong supportive evidence for the models that we have been assuming to be correct."

What's next — Work on the Event Horizon Telescope didn’t stop with the M87 image. The team has since turned its attention to capturing a video of the black hole at the center of the Milky Way — Sagittarius A*. Unlike a single image, a video would be able to show the movement around the black hole.

"It's our own black hole so there's something fun about imaging our own Milky Way's supermassive black hole, but also we know a lot more about [Sagittarius A*]," Bouman says.

Don't expect the video of Sagittarius A* to drop anytime soon — it’s still in the works as a longterm project, according to Bouman. Although Sagittarius A* is 4.6 million times the mass of the Sun, the visible region of the black hole is still relatively small when we point our telescope at it from Earth.

"It's about the same size in the sky as if I had a grain of sand in New York, and I was viewing it from Los Angeles," Bouman says. "So that's how tiny it is.”

Black Hole: The Edge of All We Know is streaming now on Apple TV.