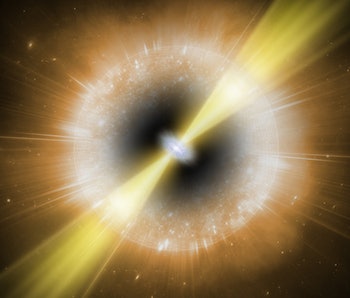 On June 16, 2018, an unusually bright glow suddenly appeared in the sky. The blast came from a faraway galaxy 200 million light years away. Astronomers officially dubbed it AT2018cow, but it’s commonly referred to as the “Cow.”

The Cow was 10 times as bright as a regular supernova and stayed bright and hot for nearly three weeks. Astronomers from all over the world pointed their telescopes at the signal to try and figure out where it was coming from, but it remained a mystery until now.

A team of scientists from the Massachusetts Institute of Technology may have just solved this longstanding cosmic mystery, suggesting that the source of the signal was the result of a dying star that gave birth to a small black hole or a neutron star — but with a twist.

The team detailed its findings in a study published Monday in Nature Astronomy.

Dheeraj “DJ” Pasham, a research scientist at MIT’s Kavli Institute for Astrophysics and Space Research and lead author of the study, heard of the debate over the origin of the Cow from a colleague of his and immediately thought of a way to settle it.

“So the idea is pretty basic,” Pasham tells Inverse. “A timescale converted to a physical science.” In other words, look at the actual times events took place, and apply astrophysics know-how to winnow down the list of suspects.

NICER is an X-ray monitoring telescope onboard the International Space Station, which observed the Cow for about five days after its initial detection.

The data revealed a vibrant pulse of high-energy X-rays. They were then able to trace hundreds of millions of X-rays back to the source of the signal, tracing every single photon to when it hit the detector by 100 nanoseconds.

They found that these X-ray pulses flickered once every 4.4 milliseconds for 60 days.

Using that information, the team determined the size of the object from which these pulses originated. The object could be no more than 1,000 kilometers wide with a mass of less than 800 suns, which means that it’s incredibly compact.

The only two objects that could hold that much mass in a small body are a newly birthed neutron star or a black hole. Pasham admits that while he was initially disappointed that the object turned out to be small, he was satisfied with the final result.

“I was pleasantly surprised because this is even a cooler result,” Pasham says.

The findings suggest that the Cow signal was likely produced after a star died and gave birth to a neutron star or black hole after collapsing onto itself. This baby black hole or neutron star then continued to devour the star from the inside, eating up surrounding material, and producing a sudden burst of energy.

HERE’S THE BACKGROUND — The Cow is one of about a dozen fast blue optical transient (FBOT), which are bright, short-lived events of an unknown origin.

The event came from galaxy CGCG 137-068, located 200 million light years away in the constellation Hercules. Astronomers first discovered it at the ATLAS-HKO telescope in Hawaii, and they later classified it as a Type Ib supernova.

But the signal was 10 times brighter than a regular supernova, which confused astronomers as to what event may have caused it.

Supernovae occur when a star nears the end of its life, collapsing under the weight of its own gravity. More massive stars leave behind a black hole — a tremendous amount of matter packed into a tight area of space — while the remnants of slightly smaller stars create neutron stars, an extremely dense, dead core of a star.

The latest findings give astronomers new prospects of possibly finding baby black holes, potentially leading them to understand better how these mysterious objects form and evolve over time.

WHAT’S NEXT — The findings not only identified the possible source for the mysterious cosmic Cow, but they also demonstrated a new way to study black holes by analyzing the X-ray bursts of FBOTs.

“With X-rays, you can probe back to the source of the pulses,” Pasham says.

Last week, NASA launched the Imaging X-ray Polarimetry Explorer, a new space telescope that will provide data on events like the Cow explosion and help astronomers find out more about what goes on within them.

Abstract: The brightest fast blue optical transients (FBOTs) are mysterious extragalactic explosions that may represent a new astrophysical phenomenon1. Their fast time to maximum brightness of less than a week, decline over several months, and atypical optical spectra and evolution are difficult to explain within the context of the core collapse of massive stars, which are powered by radioactive decay of 56Ni and evolve more slowly2,3. AT2018cow (at a redshift of 0.014) is an extreme FBOT in terms of rapid evolution and high luminosity4–7. Here we present evidence for a high-amplitude quasiperiodic oscillation of AT2018cow’s soft X-rays with a frequency of 224 Hz (at a 3.7σ significance level or false alarm probability of 0.02%) and fractional root-mean-squared amplitude of >30%. This signal is found in the average power density spectrum taken over the entire 60-day outburst and suggests a highly persistent signal that lasts for a billion cycles. The high frequency (rapid timescale) of 224 Hz (4.4 ms) argues for a compact object in AT2018cow, which could be a neutron star or black hole with a mass less than 850 solar masses. If the quasiperiodic oscillation is equivalent to the spin period of a neutron star, we can set limits on the star’s magnetic field strength. Our work highlights a new way of using high-time-resolution X-ray observations to study FBOTs.