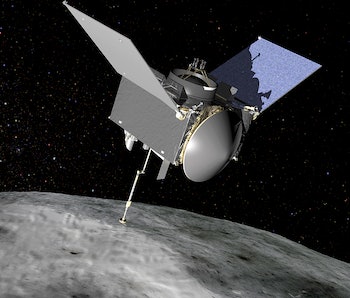 It's not quite stopping on a dime. But in space terms, it may as well be.

NASA’s spacecraft OSIRIS-REx has been orbiting asteroid Bennu since December, 2018, but as the mission gets closer to snagging a chunk of the asteroid and bringing it back, it will have to overcome a new challenge.

The plan for OSIRIS-REx was to land within a 164 feet touchdown site, but Bennu’s surface has proved to be more hazardous than we first thought, as the asteroid covered with large boulders the size of buildings.

So instead, mission control devised a new navigation method to land the spacecraft on a much smaller site, around 10 percent of the original safe zone, NASA announced this week.

The mission marks NASA’s first attempt to not only land on an asteroid, but return a sample of it back to Earth for analysis. The space agency is gearing up for this historic feat, prepping the spacecraft for its rocky landing.

OSIRIS-REx has hit some major milestones in the past two weeks, conducting the closest flyover of the landing site, naming the asteroid’s main features and changing its navigation method so that it has a better chance of surviving the landing.

Asteroid Bennu is a Near-Earth Object with a diameter of approximately 500 meters (which is about 3/10 of a mile). It orbits around the Sun every 436.6 days and comes within a close distance of 0.002 AU from Earth every six years.

All this made it a primary candidate for this sampling mission.

The team had originally planned to use a navigation system called LIDAR, which uses lasers to measure distances and navigate the spacecraft to a safe zone for landing.

The designated safe zone for Bennu’s landing site was around 164 feet, but Bennu’s surface was littered with those building-sized boulders . As a result, the largest safe areas on Bennu turned out to be much smaller at only about 52 feet wide.

In order to plan for a much smaller landing site, the team had to switch to a more accurate navigation method called Natural Feature Tracking (NFT). NFT uses optical navigation to create a high-resolution catalog from images that the spacecraft has captured of Bennu. Using this catalog, the team can identify boulders and craters on the surface of Bennu and guide the spacecraft during its landing.

NASA’s mission control has essentially created a 3D map of Bennu's topography to document how high the rocky boulders are, and how deep the asteroid’s craters go. The navigation system will use that data, in addition to real-time images taken during the landing attempt, to guide the spacecraft.

What's Next — OSIRIS-REx is scheduled to land on the asteroid in August, and return at least a 2.1 ounce sample from Bennu to Earth by September, 2023. Asteroids are believed to contain the answers to some of the lingering cosmic mysteries as they are made up of the leftover material of the Solar System, and can therefore inform us about how it was formed.

The countdown is on for this mission’s success, and OSIRIS-REx has made some serious progress in the past two weeks.