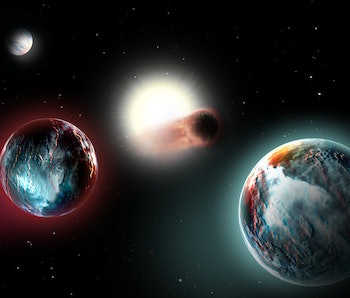 The Sun is 4.6 billion years old. It is a wise, mature star that has grown steady and reliable as it has hit middle age (NASA estimates it has around 5 billion years left). Young stars, on the other hand, can be a bit more reckless.

That's the case with V1298 Tau, a star that's about the same size of the Sun but only has around 25 million years under its scorching hot belt. A team of scientists recently discovered that this star was causing its four baby planets to be evaporated, essentially roasting them until they may be nothing more than a rocky core.

The latest discovery is detailed in a study published this week in the Monthly Notices of the Royal Astronomical Society. The study not only glimpses the unfortunate fate of these young exoplanets, but also examines how much a host star can affect its planet's habitability.

V1298 Tau is located around 350 lightyears away from Earth, and is around 1.3 times bigger than our own Sun. However, young stars tend to produce X-ray radiation that's around one thousand to ten thousand times more than the Sun.

The reason why has to do with a star's rotation over time. As stars grow older, their rotation slows down which weakens their magnetism and X-ray emissions.

Planets typically form from a disk of gas and dust that encircle a young star, and the gravitational forces pull the gas and dust together and, sometime between 1 to 10 million years later, all of that collision results in a planetary body.

After a planet is formed, the characteristics of its atmosphere largely depends on its mass and density, but is also influenced by its host star.

The scientists behind the new study wanted to examine just how much young stars affect a planet's atmosphere over time. The atmosphere is one of the main components that scientists look for when searching for habitability in exoplanets as it needs to be thick enough to allow the transfer of heat and offer insulation.

“We observed the X-ray spectrum of the star with the Chandra space telescope to get an idea how strongly the planetary atmospheres are irradiated,” Katja Poppenhäger, professor of astrophysics at the University of Potsdam, Germany, and lead author of the study, said in a statement.

By doing so, the scientists observed the grim details of V1298 Tau's effect on its four baby planets. The planets are being extremely heated by the radiation being emitted by their star that the gaseous envelope surrounding their infant bodies was being vaporized.

The study suggests that the two innermost planets may end up losing their gas atmospheres completely, and leave behind an orbiting corpse of a rocky core. The outermost planets, slightly safer from their host star, may end up being gaseous giants like Jupiter.

The findings may help scientists in their ongoing quest to find habitability on planets outside of our Solar System, and narrow down key characteristics to look for in their host stars.

“X-ray observations of stars with planets are a key puzzle piece for us to learn about the long-term evolution of exoplanetary atmospheres,” Poppenhäger said.

Abstract: Planets around young stars are thought to undergo atmospheric evaporation due to the high magnetic activity of the host stars. Here we report on X-ray observations of V1298 Tau, a young star with four transiting exoplanets. We use X-ray observations of the host star with Chandra and ROSAT to measure the current high-energy irradiation level of the planets, and employ a model for the stellar activity evolution together with exoplanetary mass loss to estimate the possible evolution of the planets. We find that V1298 Tau is X-ray bright with log LX [ erg s−1] =30.1 and has a mean coronal temperature of ≈9 MK. This places the star amongst the more X-ray luminous ones at this stellar age. We estimate the radiation-driven mass loss of the exoplanets, and find that it depends sensitively on the possible evolutionary spin-down tracks of the star as well as on the current planetary densities. Assuming the planets are of low density due to their youth, we find that the innermost two planets can lose significant parts of their gaseous envelopes, and could be evaporated down to their rocky cores depending on the stellar spin evolution. However, if the planets are heavier and follow the mass-radius relation of older planets, then even in the highest XUV irradiation scenario none of the planets is expected to cross the radius gap into the rocky regime until the system reaches an age of 5 Gyr.