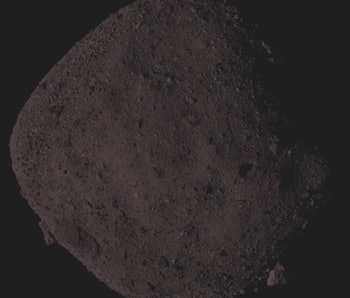 On September 8, 2016, NASA launched a small spacecraft. Its mission: Snag a piece of a flying asteroid and return it back to Earth.

And so OSIRIS-REx has been orbiting asteroid Bennu (it arrived near the 'roid on December, 2018). And it has been making close flybys of the rocky object and learning new and surprising information about asteroids with each pass.

Recently released images by OSIRIS-REx revealed yet another discovery, showing cracks in the rocks on asteroid Bennu, which appear to have been caused by the Sun. This discovery is a huge deal to scientists because it can help them identify the age of asteroids, and these rocky bodies are believed to have formed around the same time as the Solar System.

The findings were detailed in a study published this week in the journal Nature.

The images captured by OSIRIS-REx of asteroid Bennu serve as the first evidence of a process known as thermal fracturing on an airless body, which is essentially an object without an atmosphere. Thermal fracturing takes place on Earth, whereby rocks begin to crack as the sunlight heats them during the day while they cool down at night.

As the rocks expand and contract, the buildup of stress will cause them to crack and eventually disintegrate into smaller pieces over time.

“Like any weathering process, thermal fracturing causes the evolution of boulders and planetary surfaces over time -- from changing the shape and size of individual boulders to producing pebbles or fine-grained regolith to breaking down crater walls,” Dante Lauretta, principal investigator of the OSIRIS-REx mission, said in a statement. “How quickly this occurs relative to other weathering processes tells us how and how quickly the surface has changed.”

Asteroid Bennu is a Near-Earth Object (sometimes called an NEO) that orbits around the Sun every 436.6 days and comes within a close distance of 0.002 AU from Earth every six years.

Therefore, scientists believed that thermal fracturing would take place on asteroids like Bennu -- but they never had any evidence to show for it.

What the frack — During its last flyby of the asteroid, the OSIRIS-REx Camera Suite (OCAMS) obtained images of the surface of Bennu while orbiting as close as 0.4 miles from the asteroid. The high resolution of the images allowed the team of scientists behind the new study to look for evidence of thermal fracturing over a wide range of scales.

The team found evidence of exfoliation, where small, thin layers that are about 1-10 centimeters in size flake off of boulder surfaces, as well as cracks running through boulders on Bennu's surface.

“This is the first time evidence for thermal fracturing has been definitively observed on an object without an atmosphere,” said Jamie Molaro, a research scientist at the Planetary Science Institute, and lead author of the paper, said in a statement. “It is one piece of a puzzle that tells us what the surface used to be like, and what it will be like millions of years from now.”

OSIRIS-REx is scheduled to land on the asteroid in August, and return at least a 2.1 ounce sample from Bennu to Earth by September, 2023.

What it matters — Asteroids are believed to contain the answers to some of the lingering cosmic mysteries as they are made up of the leftover material of the Solar System, and can therefore inform us about how it was formed.

Abstract: Rock breakdown due to diurnal thermal cycling has been hypothesized to drive boulder degradation and regolith production on airless bodies. Numerous studies have invoked its importance in driving landscape evolution, yet morphological features produced by thermal fracture processes have never been definitively observed on an airless body, or any surface where other weathering mechanisms may be ruled out. The Origins, Spectral Interpretation, Resource Identification, and Security–Regolith Explorer (OSIRIS-REx) mission provides an opportunity to search for evidence of thermal breakdown and assess its significance on asteroid surfaces. Here we show boulder morphologies observed on Bennu that are consistent with terrestrial observations and models of fatigue-driven exfoliation and demonstrate how crack propagation via thermal stress can lead to their development. The rate and expression of this process will vary with asteroid composition and location, influencing how different bodies evolve and their apparent relative surface ages from space weathering and cratering records.