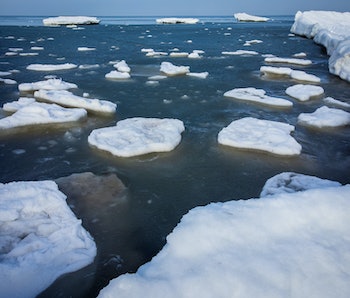 The Arctic is warming four times faster than the rest of the world, and in some areas as much as seven times. That’s according to new research by a group of Norwegian scientists. This effect, dubbed “Arctic amplification,” is well-documented, though the new study finds the region is warming even faster than previously thought.

One of the reasons is the loss of ice cover over the sea in the Arctic. Exposed ocean water absorbs more radiation from the sun than white ice. So, as ice cover diminishes, the rate of warming increases. This is what climate scientists call a positive feedback loop, sometimes referred to as a tipping point.

Changes in the Arctic can have massive and outsized impacts on other parts of the world. Greenland’s melting ice sheet could raise sea levels, for instance, while ocean circulation currents can be changed which in turn affect weather patterns elsewhere.

An obvious question, then, is whether there is any way we can halt the warming, specifically in the Arctic. Fortunately, there are potential avenues for us to pursue, even if they are all unproven in practice. Here are two unconventional methods:

2. Fill the skies with tiny particles

The first idea would be to release material such as sulfur dioxide into the stratosphere which would cause small particles to form that would reflect more of the sun’s energy back into space. With less solar radiation entering the lower parts of the atmosphere, the ground below would cool down. This process is known as a stratospheric aerosol injection.

The concept has been studied for some time and is similar to what happens when a large volcano erupts. For instance, the 1991 eruption of Mount Pinatubo in the Philippines released about 20 million tonnes of sulfur dioxide and ash particles and cooled the planet by about 0.5℃ for a year (for context, that temporarily erased about half of the global warming since pre-industrial times).

Cooling the Earth with this method would involve getting sulfur dioxide up into the stratosphere at low latitudes. The material would then get distributed around the world by winds and gradually migrate towards the pole in the hemisphere into which it was released, thereby providing a reflective shield. If the release was applied to low latitudes in both hemispheres, then it would cool the whole Earth.

However, if we wanted to just cool the Arctic, then the particles could be released closer to the region. The stratosphere also begins much lower down (about 9km at the North Pole compared to 17km at the equator) so planes wouldn’t have to fly so high.

The second idea involves “brightening” clouds over the ocean in order to, again, reflect more of the sun’s energy back into space. This is derived from the observation that under certain conditions, particles ejected from the funnels of ships cause clouds to form over the ocean.

However, the type of clouds that form depends on the size of the salt crystals. If the crystals are sufficiently small, then clouds are formed of lots of small droplets. This is important because clouds composed of smaller droplets appear whiter than those with larger droplets, and therefore reflect more sunlight, even if the clouds have the same total amount of water. Therefore, it may be possible to whiten clouds by creating more sea spray, and more tiny droplets. This could be achieved near the Arctic through the deployment of boats with pumps and nozzles.

So, there are two ideas that could help preserve the Arctic and buy us time while we work incredibly hard to sort out the root cause of the problem — namely that the level of greenhouse gases in the atmosphere is already too high, and we are currently making things even worse.

However, both these two ideas for halting the warming in the Arctic need a lot more focused research and development. This work needs to involve international groups but especially those who are most affected by climate change and least able to adapt. This includes indigenous groups not just in the Arctic but those in other parts of the world whose countries even may not exist in the coming decades as sea levels continue to rise.

This article was originally published on The Conversation by Shaun Fitzgerald and Hugh Hunt at the University of Cambridge. Read the original article here.

More like this
Innovation
Sep. 25, 2022
ePlane? Electric planes may come sooner than you think
By Gökçin Çınar and The Conversation
Science
Sep. 23, 2022
Three everyday beverages that may taste worse because of climate change
By Tara Yarlagadda
Science
Sep. 17, 2022
This household appliance could be filling your home with invisible health hazards
By Jonathan Levy and The Conversation
Related Tags
Share: