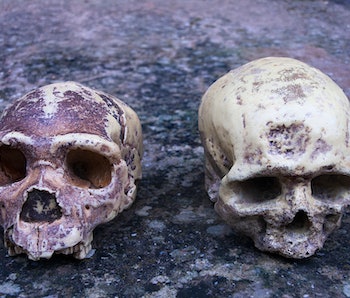 It was the perfect meet-cute. Some 100,000 years ago, Homo sapiens and Homo neanderthalensis encountered one another for the first time and got to know each other — some of them intimately.

This genetic intermingling, it turns out, was crucial for giving modern humans some pretty handy genes. By mating with the now-extinct species, we adopted some of their more useful genetic adaptations as our own. One of these adaptations has proven to be fundamental to modern health — their resistance to certain diseases.

INVERSE IS COUNTING DOWN THE 20 STORIES REDEFINING 'HUMAN' FROM 2020. THIS IS NUMBER 2. SEE THE FULL LIST HERE.

To solve this, two researchers developed a new set of computational tools to decode the human genome. In a paper published in January of this year, the researchers use the method to reveal some of the archaic genes that influence our health today, but which came to us via our ancient peers — Neanderthals and Denisovans.

Study authors Alexandre Gouy and Laurent Excoffier, from the University of Berne in Switzerland, talked to Inverse at the time about how they did it. They relied on “archaic introgression maps'' for participants in the 1,000 Genomes Project; these maps have the power to determine which chunks in your genome are probably of archaic ancestry. Gouy said that one can “see a genome as a mosaic of blocks inherited from your ancestors."

This included protection from certain infectious diseases, such as the natural resilience to malaria seen among some Papua New Guineans, which was seemingly inherited from Denisovans, the study shows.

The study also found links between Neanderthal DNA and metabolism, as well as how our bodies process key nutrients, like iron.

These findings make it clear our ancient ancestors had a tangible impact on our physiology — one which persists today.

“I personally find it fascinating to see that interbreeding with other human lineages shaped human adaptations,” Gouy told Inverse.

“As we were developing approaches to understanding modern human adaptations by looking at gene interactions, we realized that such interactions for Neanderthal and Denisova-inherited mutations had been overlooked.”

INVERSE IS COUNTING DOWN THE 20 STORIES WHICH REDEFINE WHAT IT MEANS TO BE 'HUMAN' FROM 2020. THIS IS NUMBER 2. READ THE ORIGINAL STORY HERE.