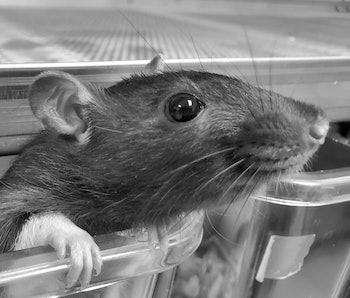 They are key in scientific discoveries that benefit humans, and along with mice, they make up for 95 percent of all laboratory studies. But most of these animal research subjects are "sacrificed" once the science is done — an estimated 100 million mice and rats are killed annually in US labs.

But the end of the research doesn't have to mean the end of an animal's life, argues Richard Hein, a biology professor at the University of Wisconsin-Green Bay.

For two decades, Hein has committed to finding a permanent home for every rat his students study — way ahead of 2019 federal regulations that allow for lab animal adoption. He's even continued to carry on adoptions through the Covid-19 pandemic via socially-distanced hand-offs.

Before working with animals, scientists like Hein have to get approval from an Institutional Animal Care and Use Committee. These committees are often local, but their guidelines are set by the National Institutes of Health. Going through the committees is mandatory for any research that receives federal funding — which includes most animal research in the United States.

Until recently, however, there weren't clear federal guidelines on what happens to lab animals after the work is done — namely, if and how the animals could be adopted as pets.

In summer 2019, the NIH implemented a supportive lab animal adoption policy, which applies to animals commonly kept as pets, like dogs, cats, rabbits, and guinea pigs. It also covers certain farm animals, like pigs and sheep.

In November 2019, the United States Food and Drug Administration followed suit, with its own policy approving the adoption of research animals. The new guideline "expressly states the eligibility criteria for adoption, retirement, and transfer," a spokesperson for the FDA tells Inverse.

"This is not a procedural change, but a newly approved internal standard guideline developed to provide overarching support to enhance and promote harmonization of FDA animal research activities," the FDA said in an email.

Meanwhile, a bill introduced to Congress in May 2019 would require federal research facilities to facilitate animal adoption — but it doesn't apply to birds, rats, or mice. This bill is currently stalled in the introduction phase.

For Hein, the necessity of finding animals good homes post-research was clear twenty years ago.

"You're taking on almost a sacred obligation by working with animals," he tells Inverse, "so it was really important to me that they went to good homes afterward."

Rat studies 101 — When Hein first designed his freshman and sophomore biology classes in 2002, he knew he wanted to introduce students to animal research. It was a way for budding biologists to "do real science," meaning conduct their own open-ended experiments.

"Many of them look at science as a group of facts that you have to memorize, then be able to explain them on an exam," Hein says. "But as a scientist working in the field, you learn that science is a process we use to discover things about the world."

Hein hears from students that working with rats has stood out as a formative academic experience. Students get laboratory experience by experimenting with the rats, but they're also the animals' primary caregivers.

"They really develop bonds with the animals," Hein says.

Hein's students study rats' metabolism, which in turn helps them learn more about how human bodies work. In freshman classes, for instance, students place a rat in a small chamber and measure how much oxygen the animals use.

"You're taking on almost a sacred obligation by working with animals."

The rats are all female — "we call them our girls," Hein says. The girls are super smart and social. Hein keeps them housed in groups, where they form dominant hierarchies.

Students work with them throughout either one or two semesters. Interactions are frequent: Some students visit the rats every day, and teach them tricks, like running from one arm to another or using a litter box.

"The more they interact with each other, the more the rats will recognize them," Hein says. If a student visits frequently, the recognition may be instant.

"When that student walks into the room, their group of rats will stand up and come right to the front of the cage, and get all excited," Hein says.

Out of the lab, into a home — Rats' intelligence and sociability makes them great pets, Hein says. Every spring, once the experiments are ended, Hein makes sure all the rats get adopted by students and members of the community. They can live out the rest of their days from a home.

During a typical year, Hein would advertise the rat adoption around the school and on social media, after their caretakers get first dibs. He would screen respondents and meet up with the potential pet owners in the lab.

But this year, a statewide stay-at-home order made finishing the usual experiments impossible, let alone facilitating the adoptions from the lab. Once it was clear school wouldn't return to normal before the year's end, Hein set this year's adoption into motion.

He continued to head into the lab to care for the rats — "at first the rats really missed their people" — and formulated a plan: Instead of inviting adopters to his lab, he would meet people in outdoor locations.

The process took about two weeks: Among the new rat owners was one student who took home four rats.

"She was so happy when she got to see them again," Hein says. It was a happy reunion, he says, even if it had to take place in a parking lot.

The fact that, at the end of most animal experiments, animals are euthanized has pitted animal welfare advocates against scientists, the former calling to end experiments in which animals are harmed. But when animals are healthy post-experiment, there isn't always a good option for them, either.

With the new guidelines on lab animal adoption, that may be starting to change. Hein's track record of adopting out rats suggests that finding people to take in animals might be easier than you think — especially for students who have formed a bond with their research subjects.

About half of the rats get adopted by students, and the rest go to community members. This year, Hein's students worked with 11 rats, but sometimes there are up to 20 rats in his classroom. The lifespan of the lab rats Hein's students work with is only two or three years — a relatively low commitment for the humans who take them in.

Hein has adopted a few of the rats himself – his daughter fell in love with two he took home, named Cheese and Cheerio.